Bitcoin to Replace 25% of Fiat Currencies by 2030, Says Futurist

David Dinkins
Bitcoin will replace many fiat currencies within 12 years, according to one futurist, as head of IMF says cryptocurrency likely to give fiat currencies “a run for their money” 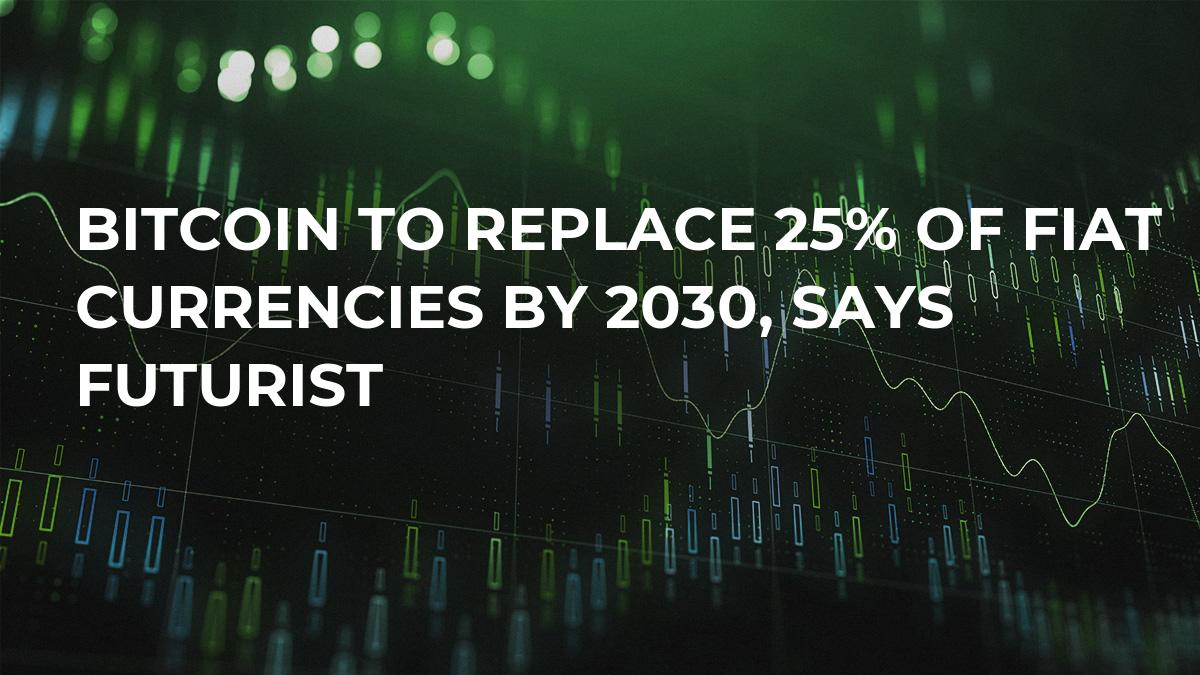 At least one futurist thinks that cryptocurrency will replace part of the world’s fiat money by 2030, according to Fortune. Thomas Frey has made the bold prediction:

“Cryptocurrencies are going to displace roughly 25 percent of national currencies by 2030. They’re just much more efficient, the way they run.”

Dr. James Canton at the Institute for Global Futures is inclined to agree, pointing out that the last few years has seen the rise of an entirely new asset class. Wall Street has helped to legitimize cryptocurrency by integrating it into the traditional financial system, by way of regulated futures and the like. Governments have also, perhaps unintentionally, added legitimacy by selling seized cryptocurrency as they would any other form of legitimate, legal property. Dr. Canton writes:

“[We are seeing] the legitimization of a new asset class emerging alongside the traditional global economy. I’d say you can expect an exponential increase of new investment vehicles to come from cryptofinance.”

No less of a figure than Christina Lagarde, head of the International Monetary Fund (IMF), agrees, telling a conference of central bankers last fall:

"In many ways, virtual currencies might just give existing currencies and monetary policy a run for their money.”

Lagarde’s comments are all the more important because, as head of the IMF, she’s essentially the central banker of all the world’s central banks. When interviewed by CNBC in October of last year, Lagarde said of Bitcoin’s potential role in the financial system, “I think that we are about to see massive disruptions.”

Bitcoin’s critics tend to focus on two areas in which they say Bitcoin is weak: extreme volatility and potential use in illicit activities. In fact, Mark Carney, governor of the Bank of England, has commented on both issues.

Carney argues that Bitcoin has “failed as a currency” because its high volatility makes it unsuitable as a store of value or medium of exchange, two of the critical properties of money. To an extent, he’s correct. It’s hard to do business in a currency that’s so volatile, as the exchange rate may have shifted by the time a transaction is completed.

Furthermore, it’s hard for buyers of goods to part with a currency that could appreciate significantly in the future, or for sellers to accept as payment a currency whose price could drop equally suddenly. The Los Angeles Times put it most aptly. Writing about the purchaser of a $3 mln home who paid in Bitcoin early last year, the Times commented that, had he waited another eight months or so, the buyer could have afforded his own “private island in the Caribbean.”

While this is true, Bitcoin’s volatility will decrease drastically as it gains more mainstream acceptance (and reaches higher prices). Consider that a large stone dropped in a small puddle will make an enormous disturbance, but the same stone dropped in a large lake will barely produce a ripple.

Put differently, a $1 bln purchase of Dash, a digital currency with a $4.8 bln market cap, would spike the prices to insane levels. The same $1 bln, if used to buy Bitcoin, with its $193 bln market cap, would produce a much smaller increase in price. As Bitcoin’s market cap approaches $1 tln in coming years, it’ll become much less volatile, because even very large buys and sells will hardly move the needle.

Concerning Bitcoin’s possible illicit uses, as CryptoComes wrote yesterday, Carney should mind his own house before he worries about Bitcoin. One of the largest banks in the world, British-based HSBC, was found guilty in 2012 of laundering over $880 mln in illegal funds from drug cartels. The bank was also found to have been involved in price fixing of precious metals, manipulation of foreign exchange rates and knowingly helping clients evade taxes.