David Dinkins
Mark Carney is at it again, slamming Bitcoin as being useful only for illicit activities. Nevermind how involved British banks have been with drug cartels in the past 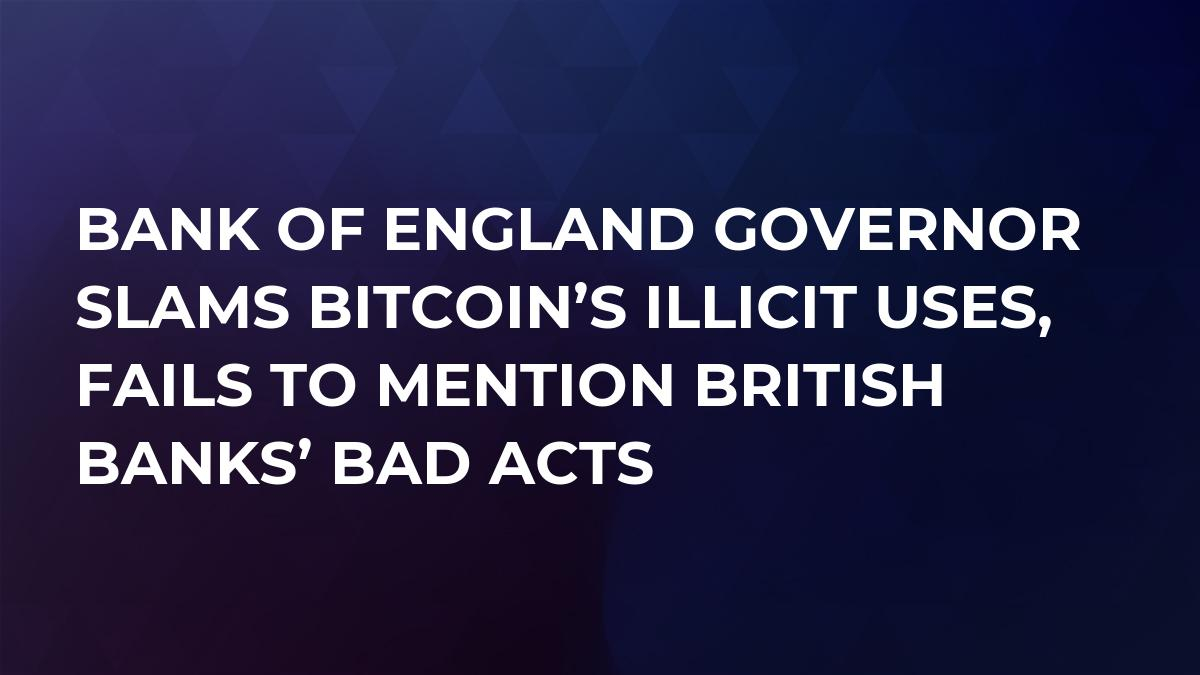 Mark Carney, governor of the Bank of England, is determined to see Bitcoin brought under the control of central banks and regulators, he said in a speech today. Carney cited “anarchy” in digital currency trading, lamenting the existence of unregulated exchanges outside the government’s direct control, according to The Guardian.

“[It’s time to] regulate elements of the crypto-asset ecosystem to combat illicit activities.”

Carney trotted out the typical rhetoric used by Bitcoin opponents, namely that Bitcoin’s primary reason for existing was to ensure anonymity in illicit transactions. In a surprisingly direct attack, Carney said:

“Authorities are rightly concerned that given their inefficiency and anonymity, one of the main reasons for their use is to shield illicit activities. This cannot be condoned. Anarchy may reign on the dark web, but in the UK it’s just a song that your parents used to listen to.”

“There are also growing efforts to curb the risk of cryptocurrencies being used for money laundering, financing terrorism and drug dealing.”

Not to be outdone, Vox recently cited a “former NSA official” who alleges that Bitcoin is supporting North Korea’s nuclear program. Apparently Bitcoin’s supposed use in “money laundering, financing terrorism and drug dealing” is no longer enough to scare the masses, so the currency is now being blamed for financing rogue states.

Speaking of money laundering, in 2012 British banking giant HSBC was fined by the US Department of Justice (DoJ) for laundering $881 mln for Mexican and Colombian drug cartels. The bank was also cited for contravening sanctions against Iran, helping wealthy clients evade taxes and rigging the price of precious metals and foreign exchange.

The Head of the US Department of Justice’s criminal division, Lanny Breuer, said of the British bank:

"The record of dysfunction that prevailed at HSBC for many years was simply astonishing."

HSBC was narrowly spared from criminal prosecution only after former Chancellor George Osborne and British regulators told US authorities that if HSBC faced the full penalty for its criminal actions, the “systemically important” bank might collapse, leading to “global financial disaster.” US lawmakers compiled a report on HSBC’s misdeeds and British regulator’s interventions with DoJ officials, entitling it

Perhaps Carney should be less worried about individuals using Bitcoin to buy drugs on the dark web or laundering ill-gotten gains and should focus a bit more on making sure his own country’s major banks aren’t laundering hundreds of millions of dollars for drug cartels. Despite all the anti-Bitcoin rhetoric spewed by regulators, it still remains that the currency most responsible for terrorist funding, money laundering and drug purchases is...the US dollar.