Joseph Young
The support towards Ethereum’s ERC20 tokens by the largest brokerage in cryptocurrency could lead to spike in adoption. 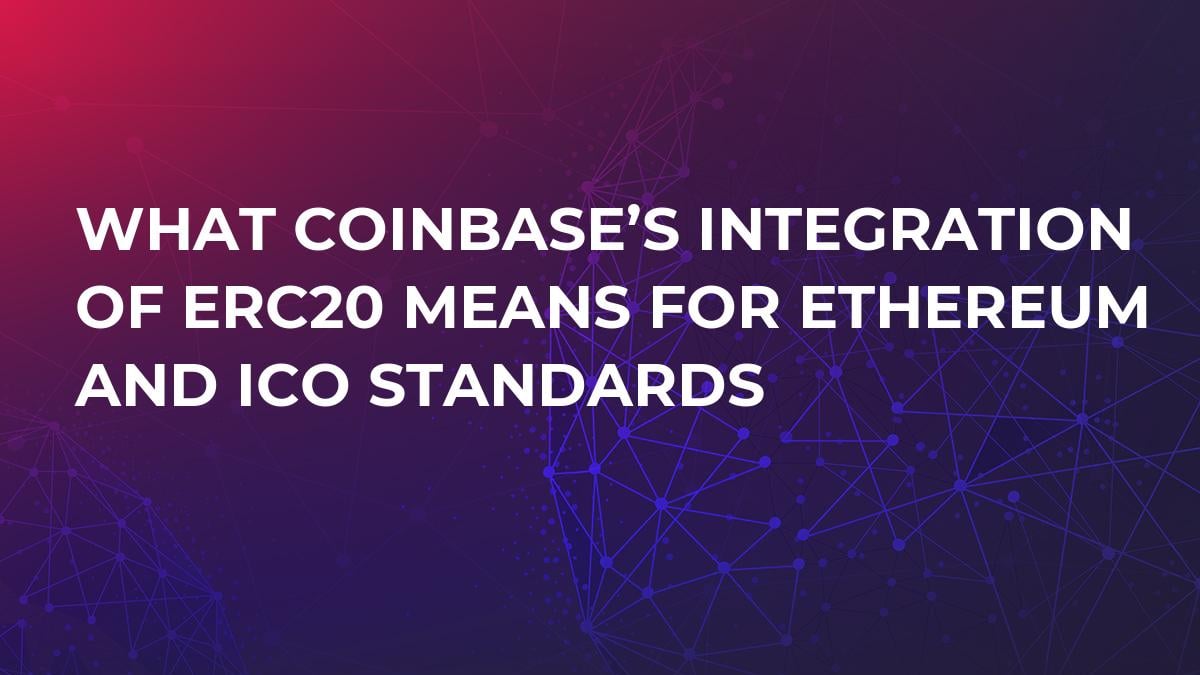 On March 27, as reported by CryptoComes, the world’s largest cryptocurrency wallet platform and brokerage Coinbase has announced its plans to integrate ERC20 tokens that are compatible with the Ethereum network.

What does this mean for Ethereum?

The ERC20 token standard of the Ethereum network has become the global standard for tokens sales and initial coin offerings (ICOs). While there exists competing platforms like China’s NEO, South Korea’s ICON and Russia’s Waves, Ethereum has consistently been the largest platform for ICOs to date.

But, despite the wave of interest in ICOs that has emerged over the past 12 months, tokens on the Ethereum network have not received sufficient support from existing cryptocurrency platforms, likely due to the strict regulations enforced by the US Securities and Exchange Commission (SEC).

Earlier in February, US SEC Chairman Jay Clayton stated that all ICOs he has seen to date are considered securities and that any token that directly benefits an organization is a security.

During a Senate hearing Clayton said:

The SEC also required cryptocurrency exchanges within the US to register with the SEC if it supports or lists ICO tokens. The statement of SEC released on March 7 read:

If a platform offers trading of digital assets that are securities and operates as an ‘exchange,’ as defined by the federal securities laws, then the platform must register with the SEC as a national securities exchange or be exempt from registration.

The statements of both SEC chairman Clayton and the SEC led the price of most tokens and Ethereum itself to fall, due to the regulatory uncertainty surrounding tokens. Businesses have also become more reluctant towards integrating tokens launched on top of the Ethereum network, due to the SEC’s increasing crackdown on ICOs.

Coinbase established a precedent by announcing its plans to integrate ICOs. It paved a path for other businesses to be compliant and integrate tokens by registering with the SEC. What once was a grey area for most cryptocurrency exchanges and platforms has gained regulatory certainty and clarity, due to the bold, and perhaps expensive, decision of Coinbase to become one of the first compliant exchanges within the US to integrate ICOs.

“This paves the way for supporting ERC20 assets across Coinbase products in the future, though we aren’t announcing support for any specific assets or features at this time. We are announcing this both internally and to the public as consistent with our process for adding new assets,” the Coinbase team explained.

It has also been acknowledged by experts including Cornell professor Emin Gun Sirer that the vast majority of ICOs are illegitimate or scams.

I don't get all the self-styled pundits first doing ICOs then bashing them. Most ICOs are crap, but the ICO mechanism is useful for bootstrapping new projects, raising funding, and generally deploying new tech. Why can't we have a reasonable non-extreme opinion? https://t.co/PiQOl3mVUD

The increase in support towards tokens would lead to the creation of a better ecosystem. It sheds light on ICOs that are actually utilizing a decentralized Blockchain network in Ethereum to provide an infrastructure for or develop decentralized applications and maximize the potential of Blockchain technology.