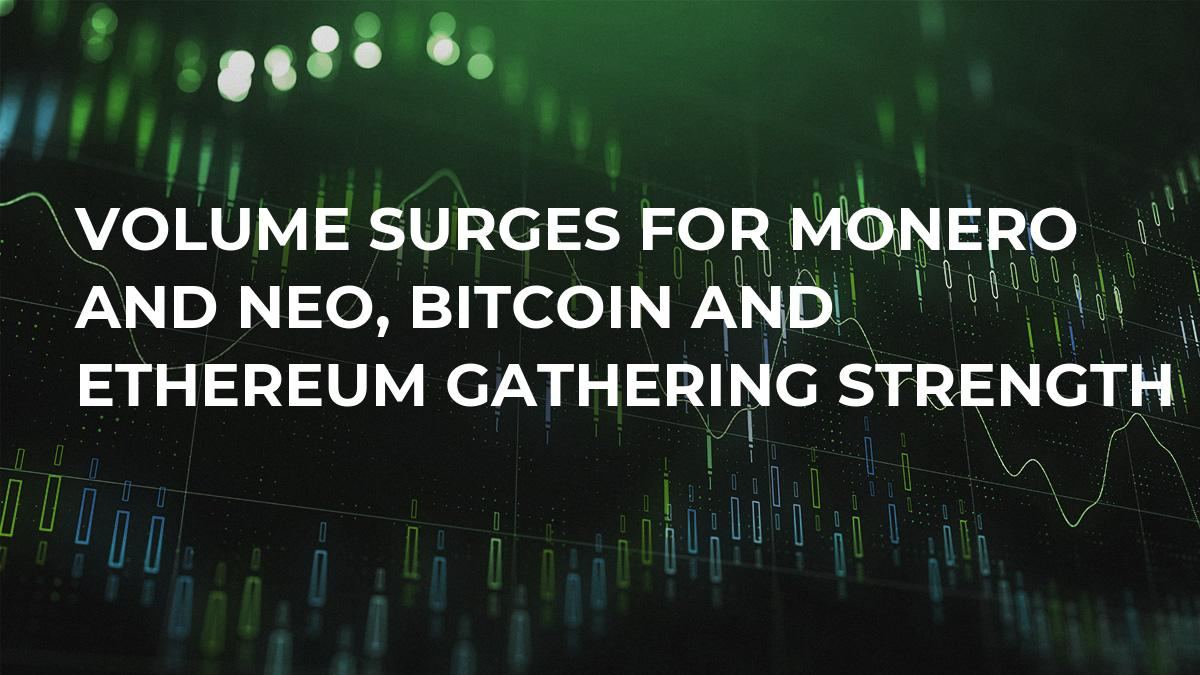 The week has gotten over the hump, and the price of Bitcoin has gotten over the critical level of resistance, once again giving the market some for a continued uptrend. But hopes and illusions are dangerous allies, especially when dealing with a market where manipulation is flourishing, and big players keep trying to drive the guppies into a net. We don’t want to intimidate readers, and there is no questioning the trend. All we want to emphasize - always evaluate events critically and do not succumb to suggestion.

Unlike Bitcoin, which is keeping afloat but not showing any outstanding results yet, altcoins have become the principal drivers of market growth.

Over 24 hours, capitalization has increased by almost $25 bln to $348 bln, which is the best growth indicator since last week, when a mysterious buyer helped the market out of the crisis. Bitcoin dominance is rapidly declining and has reached 40 percent.

As many as 4 assets from the top ten are showing double-digit growth numbers. Stellar is leading with an increase of 20 percent, boosted by the news of a partnership with an international payment software provider Novatti group. It is followed by Bitcoin Cash (plus 16 percent), which has gotten some attention from CNBC. The third place on the pedestal is shared by Ripple and NEO - both grew by 11 percent in 24 hours.

Despite repeated breaks through $8,000, buyers still managed to keep the main asset from falling, which reduced the likelihood of correction here and now.

We are also noting an increase in trade volumes. They may be quite modest for now, but judging by the shape of the candles, these are real trades that confirm the interest of a large number of participants, rather than solo performances of a few major players.

The minimum goal for buyers is to hold the mirror level of $8,200, where Bitcoin is trading at press time. This is followed by the previous local high of  $8,450, which coincides with the 0.382 value of the Fibonacci extension. If this level can be approached, overcoming it should pose no difficulty. And finally, the maximum goal - the testing, and possibly a break through the boundary of the ascending channel, coinciding with another level of lateral trading - $8,700.

Never forgetting about caution, we continue to consider the scenario of a local correction in case of another price fall below $8000. The decline targets indicated in yesterday’s review remain relevant. Any more-or-less significant correction of Bitcoin can put the market’s altcoin festivities in question. But investors don’t seem to be planning to draw back, so today the scenario of decline is less probable than the scenario of growth.

Compared to other altcoins, Ethereum is looking pale for the last two days, but the devil is in the details and, despite first impressions, investors have not been wasting time. First of all, without any unnecessary fuss, the range $490 - $530 has been traded, now becoming a a launching pad for further price movement. Second, the ascending channel received another confirmation.

The price is attempting to leave the completed figure, the dimensions of which are pointing to the perspective target of $615. The path to Olympus is a long one, and the bulls will encounter a number of obstacles, which are also intermediate targets - $550, formed by the 0.382 value of the Fibonacci expansion and $580, confirmed by the closest significant mirror level. A fallback from the current positions by breaking downward through the ascending channel is possible but unlikely. In that case, buyers will find support in the range of $480 - $490.

Yesterday's forecast for Monero was exactly on point, and the bulls’ target of $220 was executed with high accuracy. However, even we underestimated the amount of capital that flowed into the asset after leaving the long-term descending channel. Thanks to the strong support of investors, on Wednesday the price went up to $230, where it remains now.

On the way, Monero broke through the ascending channel, and now, to build its extension, it will take a bit more time and data.

The asset continues to look better than the market, the perspective goal is at $260, where the bulls will certainly meet with a rebuff.

It is quite likely that before continuing the climb, investors will be obliged to take a little break - the range $220 - $ 230 is perfectly suitable for this purpose.

Unlike Monero, NEO is behaving very predictably, so we can be brief. The gently inclined ascending channel which we outlined yesterday remains relevant - the price is testing its upper boundary, but there are not enough resources to break through yet.

However, growing volumes confirm the interest of investors, so growth is very likely to continue. The nearest target - $80 - is confirmed by a strong mirror level.

If the bulls need more space for a running start, a slight fallback to the region of $68- $70 is possible - but it does not pose any threat to the current positive situation.