Alex Dovbnya
Ripple is now out of reach for Ethereum by Wikipedia page views, but Ether has a new competitor– Dogecoin 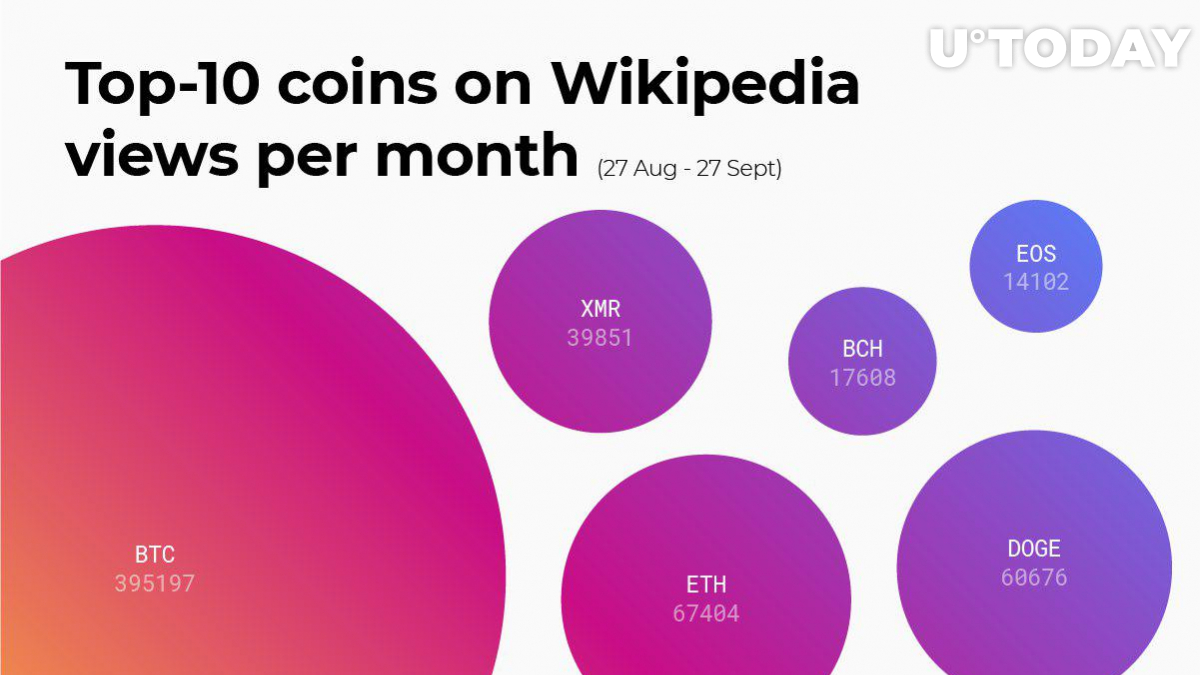 DataLight, a startup that focuses on monitoring and analyzing all kinds of crypto-related data, has recently come up with a new study that focuses on Wikipedia activity. Based on Wikipedia page views, they were able to create a list of top 10 most popular cryptocurrency on this platform (the data was collected during the period from Aug. 27 until Sept. 27).

Bitcoin is in the lead

To no one’s surprise, Bitcoin (BTC), the flagship cryptocurrency, trumps all other currencies by a huge margin. Over the past month, it scored 395,197 page views. Bitcoin had the ninth most popular article on Wikipedia last year, sharing top 10 placement with the US President Donald Trump and Queen Elizabeth II. However, it also turned out that a 57-year-old programmer, who is the editor of this very article, claims that he doesn’t own any Bitcoins despite being quite a fan of the currency. As U.Today reported earlier, Bitmain’s CEO and cofounder Micree Zhan, who owns the lion's share of ASIC mining giant Bitmain, spent hours reading about Bitcoin on Wikipedia before agreeing to work on the project.

While it was clear which coin would snatch the crown, things are getting tenser when it comes to the second. Ripple (XRP) is currently increasing its lead over Ethereum (ETH) with 102,264 and 67,404 page views respectively. This drama extends far beyond Wikipedia since XRP has managed to dethrone Ethereum two times on CoinMarketCap in merely two weeks following the coin’s major bullish momentum.

Ethereum gets threatened by Dogecoin

In fact, a full-scale battle is currently unfolding between Ethereum and Dogecoin (DOGE)– the latter is trailing Ethereum by a tiny margin with 60,678 page views in the last 30 days. Dogecoin has also made an appearance on another DataLight list of top 10 best performing coins in the past month, taking the fifth place with a 235 percent spike. Therefore, it is natural that the popular meme coin, which also recently made it to CoinMarketCap top 20, is experiencing growing popularity on Wikipedia.

Monero (XMR), Litecoin (LTC) and Dash (DASH) are among the other top 10 entries.

While it’s quite apparent that Wikipedia activity reflects the popularity of a given coin, there is actually scientific data to back up this claim. This research shows a direct link between Bitcoin price and Wikipedia activity.