Valeria Blokhina
Keep an eye on the latest updates in the crypto industry with U.Today’s news digest! 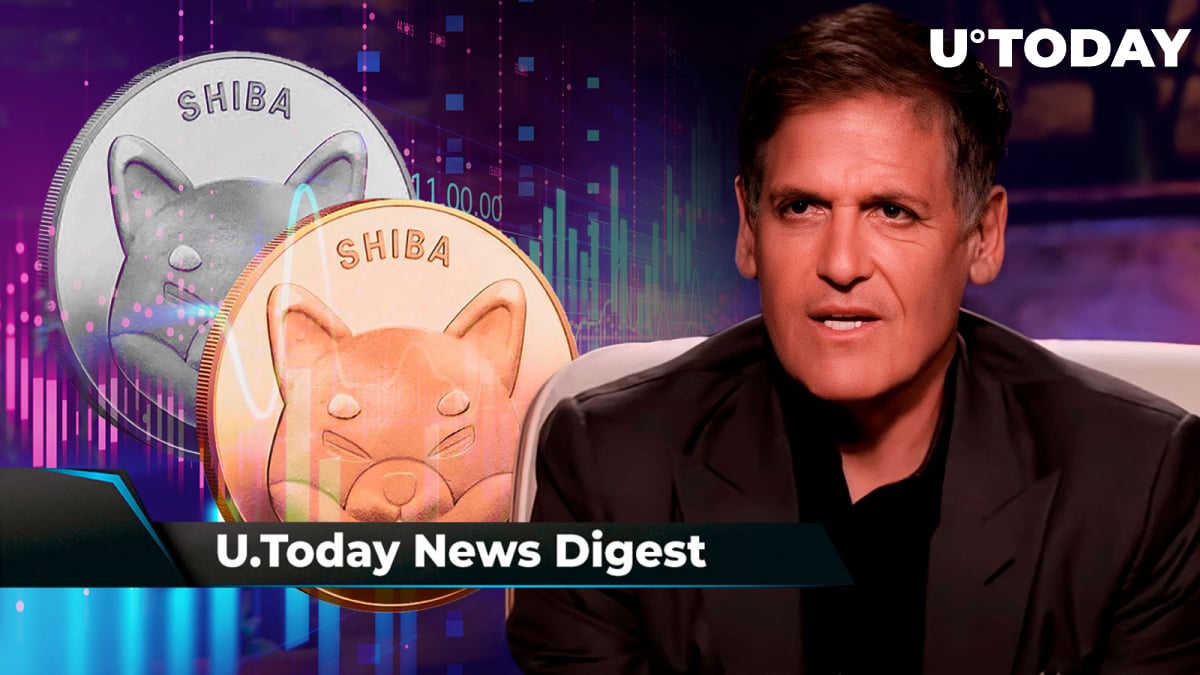 It is no secret that the SHIB community wants to see its beloved coin flying “to the moon,” and so does this Twitter user with the nickname of @xRetroNenex. He left a comment under a recent tweet by Shytoshi Kusama, Shiba Inu's lead developer, which stated: “We want SHIB to go up.” Kusama responded to the enthusiast by saying that this is the exact reason why he is working on the project. The question of whether the price of Shiba Inu will rise is still open as macroeconomic concerns plaguing the crypto market make price predictions speculative. However, investor sentiment and popularity can be bullish price catalysts along with positive news and major releases. The burning of tokens is also believed to have a positive impact on price, although not guaranteed.

Owner of the Dallas Mavericks NBA team and multibillionaire Mark Cuban is being sued for his promotion of Voyager, a now bankrupt cryptocurrency broker. Cuban is accused of engaging inexperienced investors in using Voyager's services. Apart from the billionaire, the class action lawsuit also calls Voyager CEO Steven Ehrlich to account. Mark Cuban has not yet commented on the lawsuit. Nevertheless, in the last week, the billionaire made a number of statements on the topic of cryptocurrencies, in which the Cardano blockchain was criticized particularly harshly. First, Cuban said that Cardano smart contracts have not posed any challenge to the industry, then that Dogecoin is more useful than Cardano and that its African campaign has little future.

BabyDoge 60% reversal possible for this reason

Even though the 40% rally BabyDoge saw on Aug. 9 has faded away, the Dogecoin copycat may be at the edge of a new one as it reached an important milestone. Per a recent announcement on BabyDoge’s official Twitter account, the canine crypto has reached 1.6 million holders, which shows the popularity of the token among retail investors and might fuel an upcoming rise in value. With the recovery of the crypto market, inflows into the industry have increased, meaning that in the upcoming rally, assets with a large number of holders (including DOGE, Shiba Inu and BabyDoge) might see a spike in buying power as investors look for various tools for risk exposure. At the moment of publication, BabyDoge is trading with a 1.18% price correction in the last few hours, according to CoinMarketCap.

Date of Ethereum Merge has been revealed

Ethereum enthusiasts have finally been given an answer as to when it will transition to the proof-of-stake (PoS) consensus algorithm: the event is expected to happen on Sept. 15. However, this is the preliminary launch date, which means that the upgrade could still happen a few days later. Pinpointing the precise date of the much-anticipated upgrade is hard due to potential problems. First, the Beacon chain will have to activate the Bellatrix upgrade, which is now expected to take place on Sept. 6. Tim Beiko, one of the leading developers at the Ethereum Foundation, has confirmed that the current version of the blockchain will have a specific terminal total difficulty (TTD) of 58,750,000,000,000,000,000,000. It will mark the final block mined on the proof-of-work (PoW) version of Ethereum. The next block will be mined with the help of PoS.