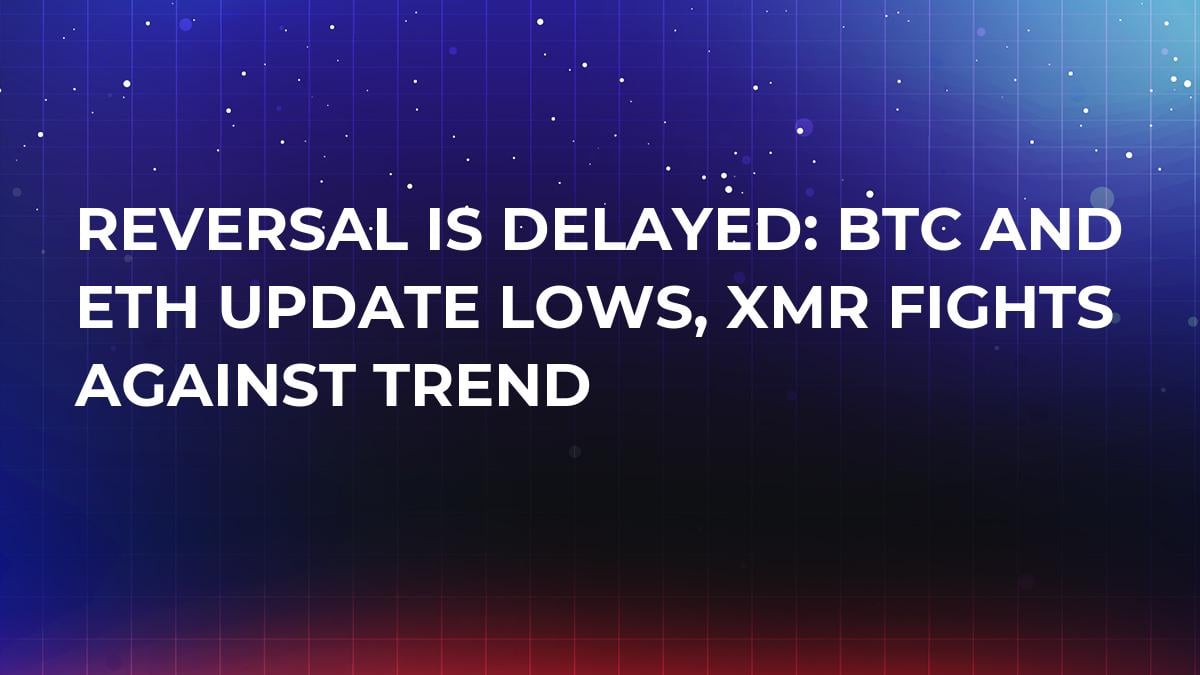 The beginning of another spring month did not precipitate a full-fledged arrival of spring to the crypto-currency market.

The agonizing yearning for warmth must go on, the sky is still covered with clouds, and Bitcoin price continues to update local lows, encountering no significant resistance on the way.

Even some of the altcoins which were blooming like early spring flowers last week do not show any attempts to go against the market (with one exception).

The total capitalization of cryptocurrencies fell to $260 bln, which corresponds to the values ​​of mid-November 2017 - the time before BTC and altcoins went on their crazy rollercoaster ride.  In the top 10 assets, nothing interesting is going on - for most positions, prices went down an average of 5 percent. During the weekend, Bitcoin had reached a minimum of $6,430, and at the time of writing, it is fluctuating around $6,900. Its dominance continues to set yearly records and by Monday increased by another two tenths, to 45.7 percent.

Verge is the only asset to beat the market

The exception that we mentioned above is Verge. In 24 hours, the price of the asset grew by 20 percent, which is an absolute record among all cryptoassets.

The interest of buyers is being encouraged by the CEO’s announcement of a mysterious partnership, the details of which will be disclosed on April 17. Will developers be able to meet community expectations? We will find out in 2 weeks.

Before proceeding to a detailed analysis, we would like to examine the enlarged Bitcoin graph on the daily price chart.  Three important facts emerge: BTC is in a long-term downtrend since December 2017, the uptrend line constructed on the September 2017 and February 2018 lows was broken, and the trend which was formed back in July 2017 is being tested right now.

On the four-hour chart, we see that the price is squeezed between two uptrends, but Bitcoin has no reliable support anymore.

Just to maintain the current levels, buyers must keep prices above $7,000 today, and to transition go growth, they will have to storm $7,200.

So far, nothing is indicating that the bulls have enough strength for the push. The situation is exacerbated by the proximity of the boundary of the downtrend, which is acting as a resistance.

In the course of the day, Bitcoin is likely to trade in the range of $7,000 - $6,600, but the repeated breaking of the boundary of the lower uptrend will confirm the bulls’ weakness and allow the bears to begin moving toward $6,000. The Fibonacci grid, indicating a value of 1.618 at $6,110, is just one of the possible constructions based on local triggers, and all of them will point to the zone of the previous February low, so the goal of the sellers remains obvious.

Ethereum continues to outpace the market in the rate of decline - last Sunday the price dropped to $360. The rebound amounted to just 5 percent, and by press time the asset is trading at $380.

Confirming its love for triangles, ETH is once again forming a figure of technical analysis, the full activation of which will lead the bears to $315.

This level coincides with the mirror resistance formed at the time when ICOs were in their heyday, and Ethereum was relatively young and promising. Despite numerous attempts (5 of them), bulls could not break the boundary of the descending channel, which indicates their extreme weakness. On the way to $315, the price will encounter a few more supports, the main one being at the level of $330.

In order to stay afloat, buyers have to keep the price above $390, and then gain a foothold at $415. For now, this seems practically unattainable.

Monero buyers do not cease to impress us with their perseverance and ability to find resources to support the asset at a crucial moment.

While most of the coins have updated local lows of the end of last week, the price of XMR went right instead of down - not a bad result in a falling market.

In the event of a reversal, the laterally traded range of $160 - $180 can be a great starting point for price growth to $200. However, since the market is showing no signs of reversal, we continue to view this zone as support. In the context of further decline, the target remains the same - $150, coinciding with the minimum of the February correction.

The indications that we used in the March 30 review not only remain relevant, but confirm our previous conclusions. The downtrend line, for lack of any better application, became the support for the price of NEO. It was from this line that NEO rebounded on Sunday when Bitcoin reached its minimum value. We believe that buyers can count on this support going forward.

The mirror level of $42, on the contrary, lost some of its strength, and the closer the downtrend line approaches it, the less value it will have for supporting the price. Therefore, the next target after breaking through the trend could be $40.

Hypothetically, in case of growth, the main resistance still the level of $50. We cannot change our opinion about the attractiveness of NEO for medium-term investments until the price gains a hold above the boundary of the previous upward trend (green line).