Alex Dovbnya
??Joseph Lubin, the Ethereum Co-Founder, has made a bold price prediction about Ethereum for the next two years — can he be right? 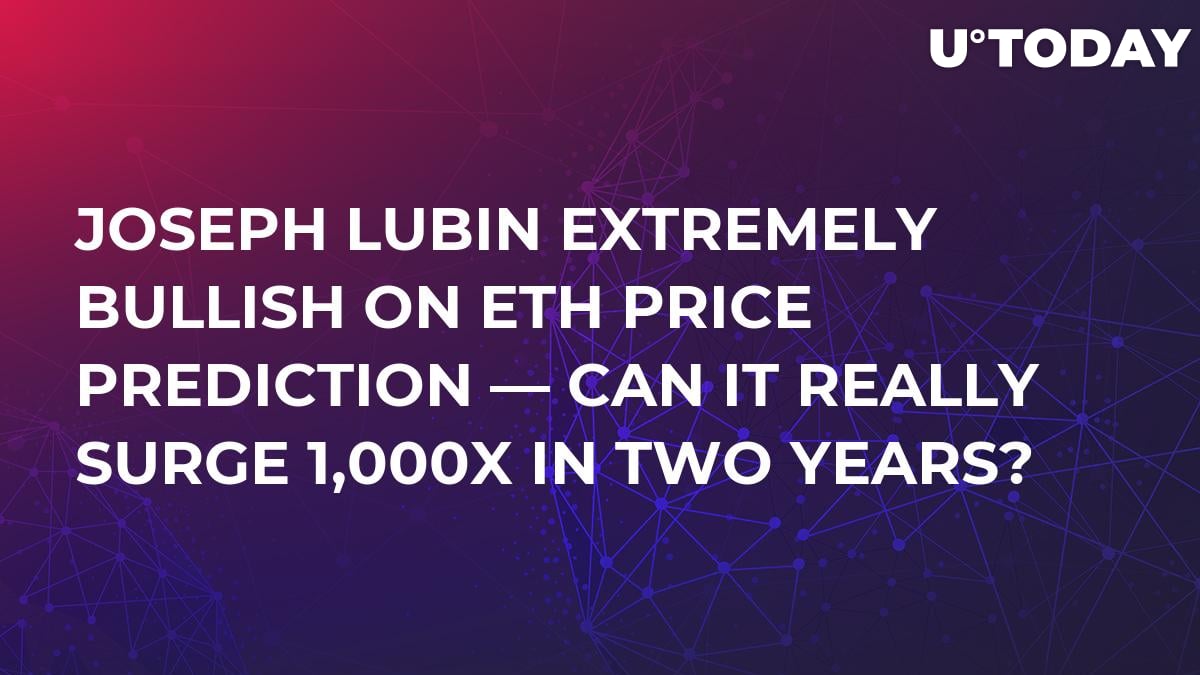 The cryptocurrency space is not scared of making outlandish predictions about the movement of a coin and its potential price down the road. The latest has come from Ethereum co-founder Joseph Lubin, who has predicted that ETH will be worth more than 1,000 times its current value in the next two years.

It is a bold prediction, but not out of the scope of the cryptocurrency ecosystem, which has seen more significant price gains in shorter times. Ethereum is a dominant cryptocurrency with a lot of importance, and while it has been slipping somewhat in the past few months, it has a lot to look forward to on the horizon.

Lubin is confident that Ethereum’s movement down its roadmap will be the catalyst to start a significant movement in the price. What he calls ‘Ethereum 2.0’ will soon be released, seeing the cryptocurrency shift from proof-of-work to proof-of-stake; indeed a significant update, but is it one big enough to push this kind of growth?

Big plans in the works

Lubin, speaking at the SXSW 2019 Conference in Austin, Texas, said the following:

“Ethereum 2.0 is launching soon. We have eight teams working currently on Phase 0 of the four phases of the roadmap. We will further develop the base layer of the Layer 2 expansion solution, which will be in the next 18- at least 1000 times in 24 months. Once this completes, Ethereum will continue to expand. Since the start of the ecosystem in 2009, Ethereum has seen many incredible rises in the price of the tokens followed by many corrections. One of the significant corrections was done in 2018, which was 5,000-times more valuable than when ETH was initially launched.”

There is a lot to break down and analyse in that statement, but what one can take away is that Ethereum is trying to catch up after pioneering the smart contract blockchain. Competition, like Cardano, Tron, EOS and NEO, have all advanced past Ethereum in many regards, especially in terms of their algorithm.

But, Ethereum will be changing its own algorithm to provide more speed, and thus higher adoption and use. They will also be developing the base layer of Layer 2 expansion, which will further speed things up in terms of scaling.

He goes on to mention that ETH itself has seen a 5,000 percent rise in price from its high of 2018 compared to when it first launched, so perhaps with all these changes in the works a 1,000x increase is not that outlandish.

Ethereum has on its side the fact that it is a pioneer of smart contracting on the blockchain, and this effectively propelled the blockchain space into its second generation. The problem has been that the project seemingly lagged recently, and that lagging was felt in the price dropping below $100 not too long ago.

But, if the project can start to address some of its initial teething problems, it can indeed become a good option going forward, and a good project to invest in early.