Dmitry Cake
Someone needs to wake up the buyers! Bears are tearing up the market without resistance, as Bitcoin price drops to $8,600 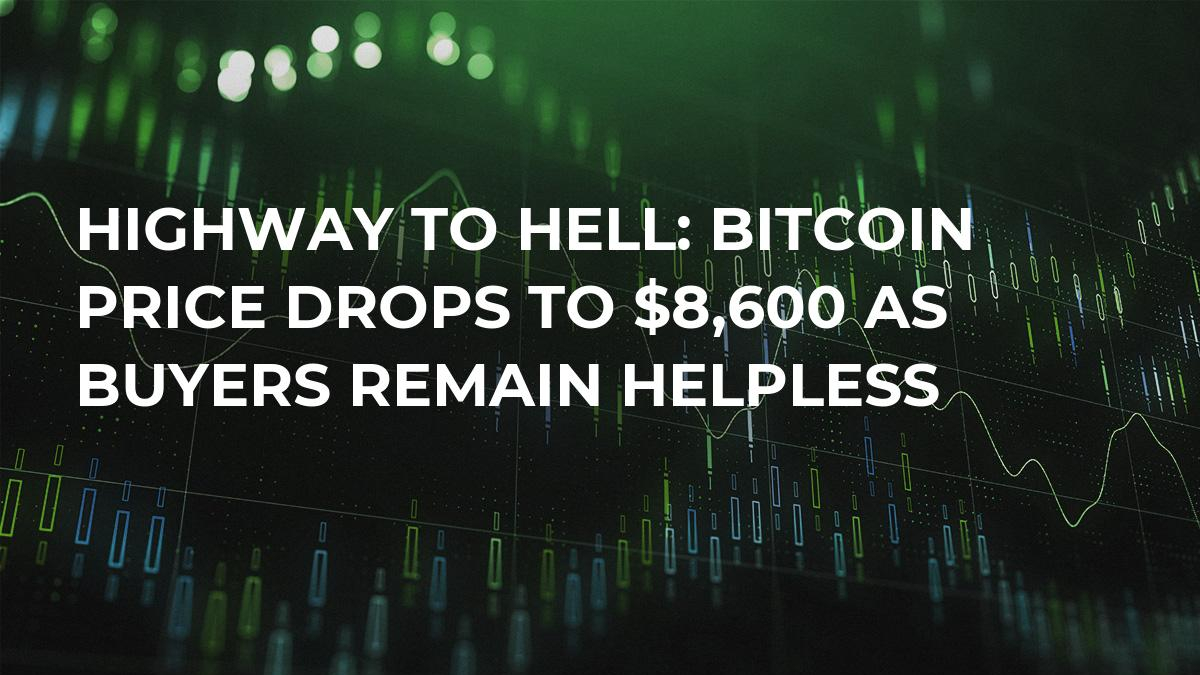 It’s fortunate that the color black does not have shades; otherwise, we would be obliged to say that Thursday turned out to be even blacker than the “Black Wednesday,” as we dubbed it yesterday. The fall of the market continues at the same pace, and the lack of a silver lining is draining the reserves of investors’ composure, patience, and enthusiasm, which serves the bears well. Buyers are in no hurry to part with their savings (even if they still have them), keeping in mind the rule “don’t try to catch a falling knife” and awaiting a clear sign of renewed growth.

Harsh statistics are not giving us that sign yet: market capitalization fell by another $40 bln, down to $350 bln which is close to the value from the beginning of February. Bitcoin price fell by another 15 percent to $8,600 which, interestingly, also corresponds to the levels of last month’s beginning. History repeating? Only Bitcoin dominance remains stable at 42 percent, the same as the previous day.

Nothing extraordinary happened in the top 10 altcoins: average price reduction for most positions fluctuates in the range of 10-11 percent. Only Cardano (again) and Monero stand out from the list, with losses of 15 and 19 percent respectively. Monero had been doing reasonably well up to this point, supported by the expectation of the upcoming fork. But during a global correction, forks tend to lose their significance, so now Monero is “catching up” with its colleagues at an accelerated pace.

Manipulating minds rather than prices

The media cycle is not changing, yesterday’s negative news pieces have been joined by a few more. The most discussed one concerns the sale of 35,000 Bitcoin and the same amount of Bitcoin Cash by а trustee of the infamous Mt. Gox. Converted to US Dollars at the current BTC rate, this makes up about $400 mln. Until recently, this would have been one-thousandth of the full cryptocurrency market capitalization and one four-hundredth of Bitcoin capitalization. Doesn’t it seem that the influence of just one, though powerful player on the market is somewhat exaggerated?

During Thursday's trading, Bitcoin reached the next decline target, which we described in yesterday's review- $8,900. From the point of view of graphical analysis, the situation does not look good: the price chart of the underlying asset continues to draw new bearish flags and pennants. On the hourly chart this is less noticeable, but going down to lower time frames, the picture becomes clear. 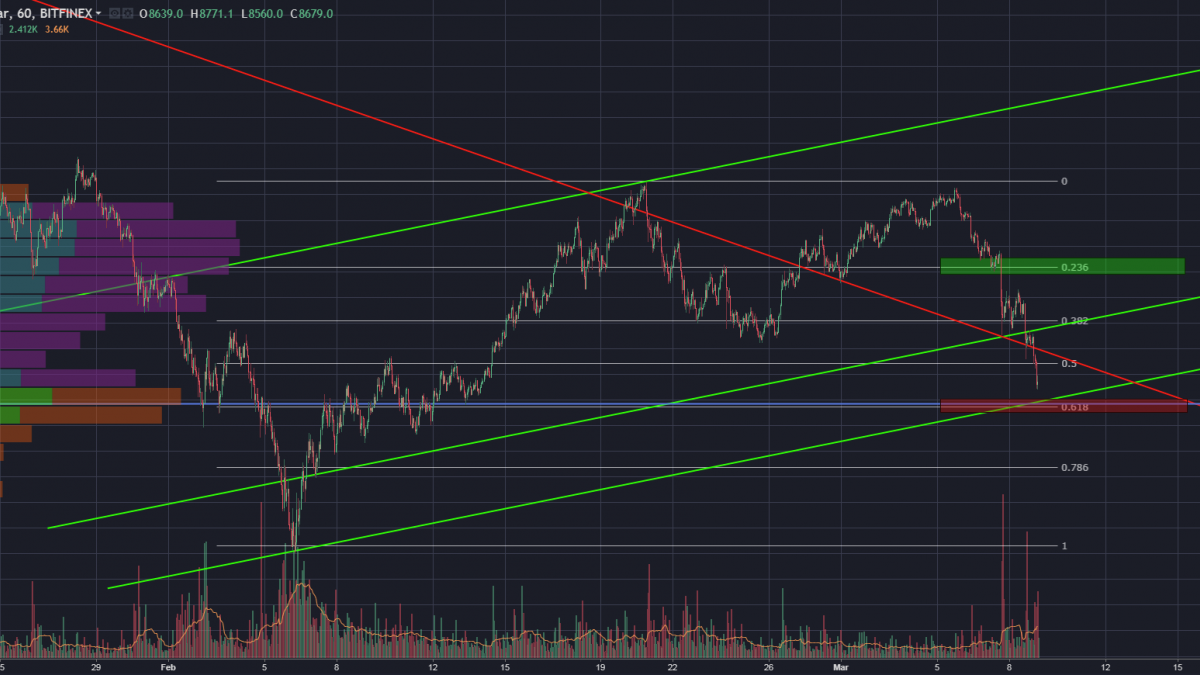 The good news is the decline in volumes for sale. There are two pieces of bad news, though: first of all, the price is slow to push away from key levels, and second, after an unsuccessful retest, Bitcoin returned to the long-term descending channel. Together, this means that the culmination of the correction is still ahead. All the previously indicated levels remain relevant, so the next target is in the zone of $8,400-$8,250. It’s too early to speak of transitioning to growth, for that, we would need a clear signal of reversal with large purchase volumes. We recommend extremely cautious purchases from the level of $8,400 with a mandatory stop loss at $8,200.

Despite the ongoing panic in the market, those readers who followed our recommendations and put out stop loss orders at $770 can observe the situation with equanimity. At the moment of writing, the price is balancing at $660, near the 0.786 Fibonacci correction. Additional support is provided by the lower boundary of the descending channel and the mirror resistance level. 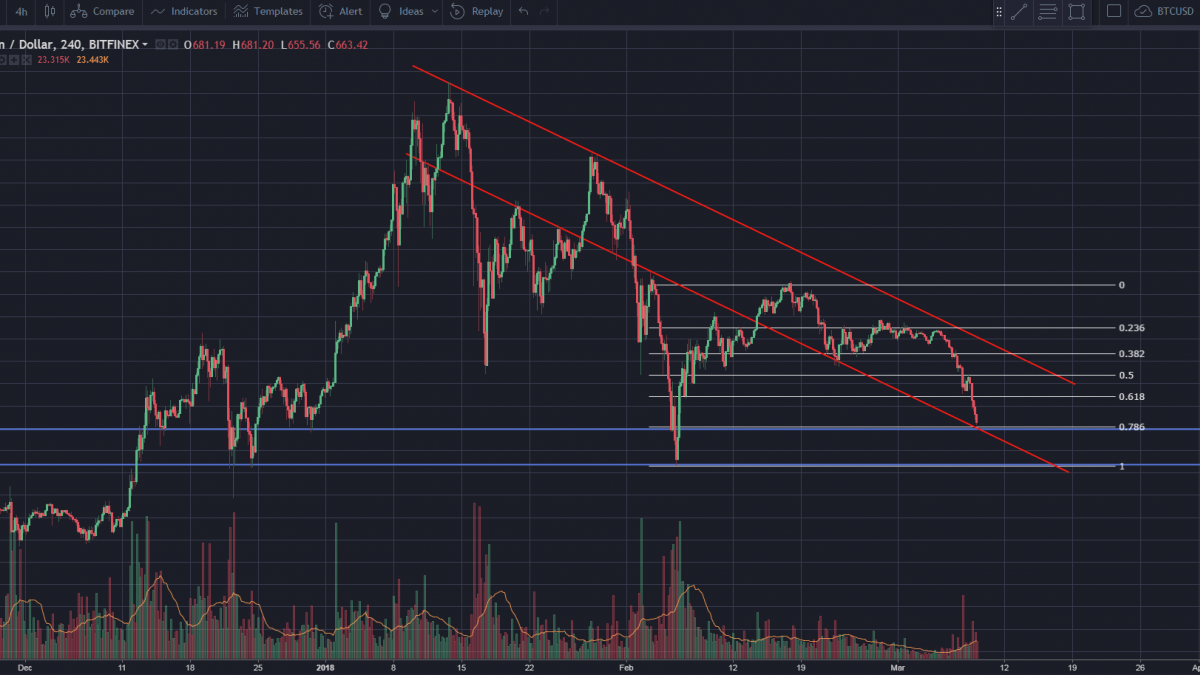 The last reliable level that can be constructed based on available data is $650. Lower than that, there is just the minimum reached during the February correction- $570. The longer the price is forcibly kept at $650 level, the more dramatic the fall will be if/when investors finally lose their nerve. Just in case, we’ll repeat the evident truth- now, everything depends on Bitcoin price. In case of continued correction, Ethereum can be “caught” at $570-$580, again with a mandatory stop loss at a slightly lower level like $555.