Ethereum vs EOS: Which Blockchain for dApps is Better?

Vera Yurina
What’s the difference between Ethereum vs EOS blockchains? Here’s a detailed insight into the two technologies, their strong and weak points 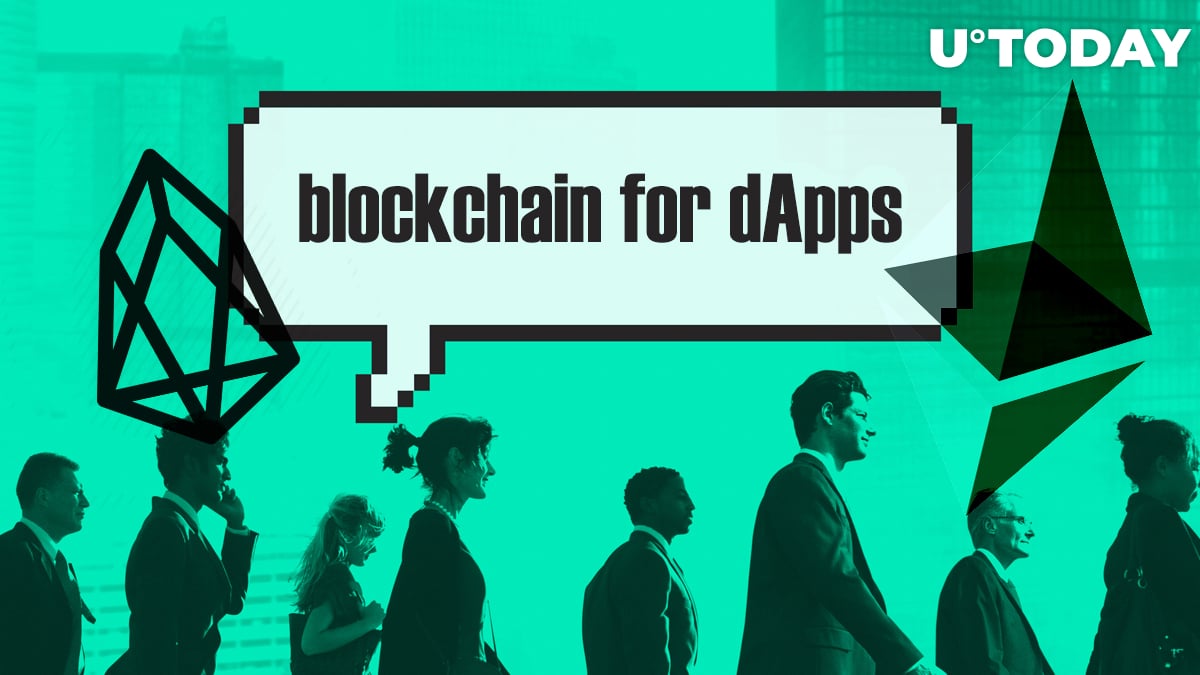 Both Ethereum and EOS have become legendary projects with a serious contribution made for the blockchain technology and the crypto community. At first glance, the blockchains seem to be similar: both leverage smart contracts for creation of dApps. However, at the core, they vary. Which blockchain is better, and where they should be used? Read the side-by-side comparison of Ethereum and EOS projects.

The history of Ethereum

The author of Ethereum blockchain is Vitalik Buterin. In 2013, he proposed the new-generation blockchain platform (so-called Bitcoin 2.0) where users could create and run smart contracts and decentralized applications. To implement his plans, Buterin gathered the team of like-minded people and collected money in the crowdfunding campaign in the second half of 2014. In total, 31,591 BTC were collected for the development of Ethereum, which at that time amounted to $18 mln. Ethereum was launched in July 2015, and on March 2016 the platform was updated to a stable version.

An important moment in the history of Ethereum is the separation of the chain as a result of the network's hard fork in the summer of 2016. In June, an ICO DAO was held on the basis of Ethereum, the idea of ​​which was to develop a platform for automatic investment management. In total, $ 100 mln in ETH was raised, but due to an error in the smart contract of the project, more than half of this amount was stolen by an unknown hacker.

The stolen money was found and transferred to a blocked account, but it was impossible to return it to investors without a hard fork of the network. Thus, with the support of Vitalik Buterin and the majority of the Ethereum community, the blockchain was rolled back until the money was stolen and a mechanism for returning funds to DAO investors was launched. But some Ethereum users did not support the idea of ​​a hard fork used to satisfy the financial interests of a particular group of people. So they continued using the original blockchain naming their project Ethereum Classic.

The main challenge for Ethereum happened on December 2017 when CryptoKitties game appeared. This simple game for breeding unique kittens on the blockchain proved so popular that the Ethereum network could not cope with a sharp increase in the number of transactions, and the transfer fee soared from $0.2 to $4. However, the popularity of CryptoKitties didn’t last long, and the network returned to normal operation. In July 2018, a spam attack was carried out on Ethereum. According to Vitalik Buterin, this attack cost Ethereum $ 15 mln, and at its peak, the transaction fee jumped to $5.

These events indicate that Ethereum has serious scalability issues. However, they can be resolved with the transition to the Casper protocol and the introduction of sharding technology. Also, numerous teams within the Ethereum worldwide community are building so-called ‘Second Layer Solutions’. This definition refers to a circle of technologies which let make some computations off-chain and unload Ethereum mainnet. This, in turn, can increase the limited bandwidth of the network.

In 2018, Buterin has started revealing the details about Ethereum 2.0 that’s said to the ‘world’s computer’.

EOS: the story of the overwhelming start

The creator of EOS is Block.one company co-founded by the veteran and blockchain visionary Dan Larimer (co-founder of Bitshares and Steemit). The platform code is free – it’s available on Github. Community members are free to send pull requests (suggestions for changing the code), but Block.one has the final word.

There are also third-party developers who create related products: wallets, voting tools, and plugins. Often, block validators themselves in the EOS network (block producers) do this.

EOS holds the record for the crowdfunding sum gathered during the ICO – the project received contributions worth $4+ bln! The token sale lasted almost a year - from June 26, 2017 to June 1, 2018.

We're getting close to 1 million daily transactions if you mute the block-twitter spam. That's over 11 real transactions per second for a blockchain that's not even 4 months old ?. pic.twitter.com/PgcxpJagsc

Why EOS was so popular among investors? High expectations for EOS were conditioned by the previous successful projects of the main platform developer Dan Larimer and the declared revolutionary platform scalability. Already at the development stage, the EOS blockchain was used by such large industry projects as Bitfinex, Bancor, Everipedia. At the same time, before the launch of the mainnet, the EOS token increased in price by 4 times.

The Ethereum blockchain is a distributed transactional environment for operating on data and interacting with the program code of decentralized applications, the operation and security of which is ensured by cryptographic rules.

The main conceptual principles of the Ethereum blockchain are:

In simpler words, the Ethereum blockchain is a platform that allows you to perform asset transfer operations between network participants and create dApps based on smart contracts.

The idea behind Ethereum is explained by Vitalik Buterin in layman’s terms:

Ethereum blockchain’s activity is supported by users (miners) who provide the network with the computing power of their equipment to perform transaction validation operations and generate new blocks (mining). For this, they receive a reward from the system in the form of ETH coins, which is the main motivation for their participation in the network.

The role of ‘gas’

All operations in the Ethereum blockchain are carried out through transactions (signed data packets sent over the network). This can be the transfer of ETH coins, the creation of a smart contract or the launch of a code programmed in an existing smart contract.

‘Gas’ serves as the fuel for the exchange of data packets inside the Ether blockchain. We can define gas as a kind of internal currency of the network that characterizes the number of computational operations on which the power of miner equipment is spent.

In EOS network, ‘Gas’ is not used.

The peculiarities of EOS blockchain

Like Ethereum, EOS implements smart contracts and provides tools for the creation of Apps. The main advantage of EOS blockchain is use of is DPoS. How does it differ from PoS?

DPoS (Delegated Proof-of-Stake) is a consensus algorithm first developed by Dan Larimer in 2013 for his BitShares project. This protocol is also called a form of "digital democracy."

The difference between DPoS and PoS is the separation of network participants into block producers and voters. In other words, not all EOS coin holders can be directly involved in creating blocks. In order to become a validator, a network member must comply with two requirements:

21 validators are involved in the creation of each new EOS block. But there are many more people who want to take this place. Block producers are selected by network participants, and the weight of each vote depends on the total assets of the voter. The pool of validators with the highest number of votes form a queue, from which validators are selected for the next round of creating blocks.

A voice can be transferred to another validator at any time. You can also vote for several block producers at the same time, and the votes will be of equal strength. Loss of user votes removes the validator from the game. Such a political structure forces the validators to refrain from abuse and, according to Larimer, should make collusion and excessive centralization impossible. In November 2019 after the congestion in the Ethereum network caused by one shady airdrop, Block.one decided to participate in block producer’s referendums itself.

In PoS, the chance of becoming a block validator depends on the number of coins blocked in the wallet, while in DPoS, this role is played by the votes cast for the block producer by network participants.

Unlike PoS, the coins used in voting are not blocked in the wallet but can be freely used. This will reduce the weight of the voter in the next vote. Another difference is the lack of a mandatory minimum amount of coins for voting.

How EOS differs from Ethereum?

Ethereum vs EOS side by side comparison

Here’s a detailed side-by-side comparison of Ethereum and EOS blockchains:

Both EOS and Ethereum are widely used for the creation of decentralized applications (dApps). When Ethereum was the only platform with smart contracts and all necessary tools, it used to be very popular. However, the introduction of EOS, Tron, and blockchains alike changed the landscape of dApp market. Here, you can see the statistics:

Evidently, the number of functioning EOS dApps is not so huge, but they are used by a larger number of people, and the volume of transactions is several times bigger.

Interesting to note, Ethereum dApps are mostly present in two spheres: gambling & games, and exchanges & finances. Those are the sectors where the use of smart contracts is crucial for solving the matters of trust.

The number of EOS applications created is not so impressive despite the ease of work with C++ language and developer tools provided by EOS. However, the quality of these dApps might be higher, and they quickly attract thousands of users.

EOS dApps are also widely used in gambling and finance spheres, especially eCommerce. The most popular dApps based on EOS are EOS Knights, EOS Dynasty, Dice, Hold’em Poker King – all are related to games.

Developed by true cryptography experts, both Ethereum and EOS blockchains provide infinite possibilities for dApp developers – their smart contracts can be used almost anywhere, in any sphere. However, the underlying technological basis of EOS is a bit more advanced, which is why the EOS dApps are more interesting for devs, not mentioning the exceptional transaction speed and close-to-zero transaction fees. Ethereum has a bright future, but the scalability issue and a few more problems should be solved by Vitalik Buterin’s team in the nearest future.