How Long Does it Take to Mine a Bitcoin?

Alex Dovbnya
The complexity of Bitcoin mining is growing every day. Find out the exact numbers in order to know how long it will take to mine 1 Bitcoin 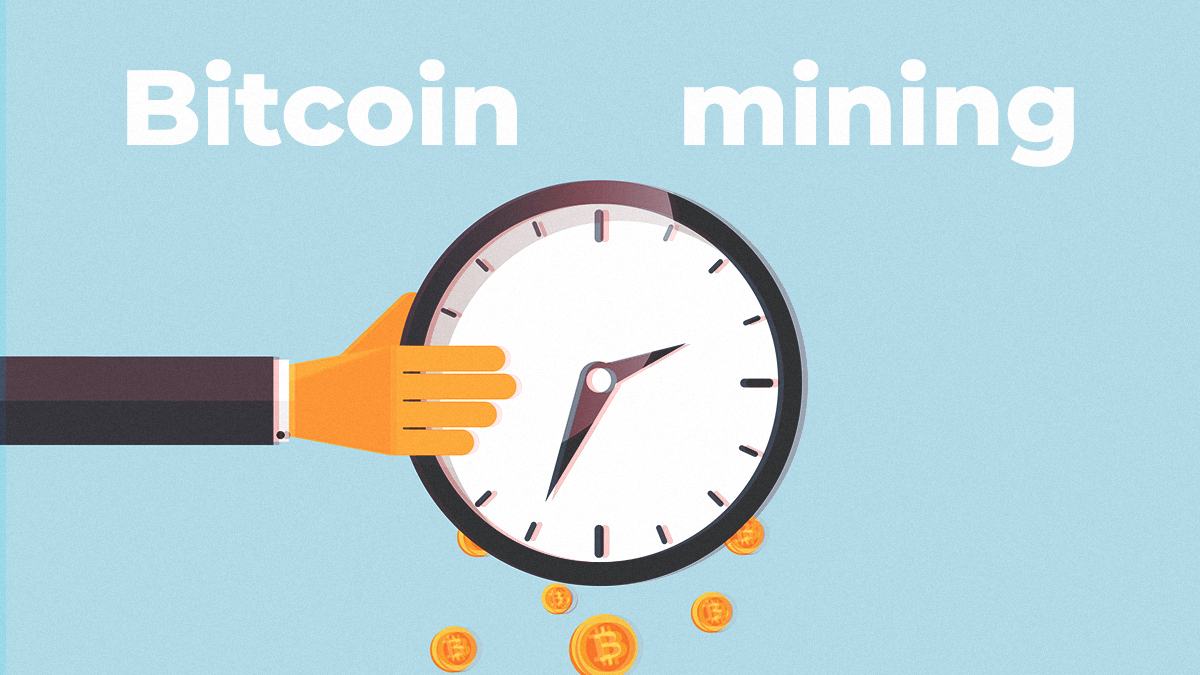 After the Bitcoin craze, which took over the world in December 2017, many people got interested in crypto mining as a potential source of income. However, the harsh truth is that Bitcoin mining got extremely competitive these days, so the overwhelming majority of newbies feel like they’ve already missed the boat. In 2011, the extremely low difficulty rate would allow you to mine one BTC per day with your ordinary PC, but now you have to use specifically designed ASIC mining chips. The question is, how long does it take to mine 1 Bitcoin?

What is the hash rate?

How long does it take to mine a Bitcoin block? Before we find out about this, it is important to understand what Bitcoin’s hash rate is. A hash is a cryptographic puzzle that miners have to solve. Consequently, the hash rate measures the speed at which a specific machine operates and solves mathematical problems. Bitcoin’s cumulative hashing rate increases almost every single day due to the monopoly of large mining farms.

In June 2018, it was reported that Bitcoin’s hashing rate skyrocketed by five exahash over the course of two weeks. Remarkably enough, it took the whole network over more than eight years to reach a similar milestone. The sudden spike in mining difficulty doesn’t necessarily mean that a lot of miners join the industry in droves and create a bigger competition– it rather indicates that ASIC chips become more advanced. The same happened during the transition from CPU mining to GPU mining. Thus, huge ASIC manufacturers (Bitmain, in particular) effectively establish a monopoly. Here are the most popular producers of ASIC hardware:

The speed of mining

New BTC are mined almost every 10 minutes, but you have to actually earn a part of the block reward by contributing your hashing power to the network that a necessary for solving a block. As of now, the block reward is set at 12.5 BTC.

By the way, the actual block time is not determined– it often takes less than 10 minutes to mine a single block. This is only an average timeframe that is set as a target for miners.

The fastest type of mining

How long does it take to mine a block of Bitcoin alone without powerful AISC chips? More than eternity. You may run your hardware for decades without mining a single block. Furthermore, it will never be very unprofitable power-cost wise. Those who are interested in how long it takes to mine a Bitcoin with GTX 1080 may be disappointed as well since GPU mining hasn’t been profitable for years unless you run a large farm with plenty of mining rigs.

If you want to mine effectively, you have to join any mining pool of your choice. The obvious downside is that you have to split the reward for solving a complex mathematical problem with other pool members (the more computing power you contribute, the bigger part of the reward you get). In a mining pool, you will need to contribute about four percent of the cumulative processing power, which is required to mine a block, in order to earn one BTC. How long it takes to mine a Bitcoin in a pool? There is no clear answer to this question because the exact duration depends on what kind of pool you choose and what equipment you use. Here’s a table which shows popular mining pools and their fees.

Of course, you can engage in solo mining as well, but you need top-notch mining hardware for that. For example, Antminer S9 will set you back $2100. How long does it take to mine a Bitcoin with ASIC? Considering that this miner has a hashing rate of about 13.0TH/s, you would be able to mine 0.02 BTC per month (200 USD). Hence, it would take about 50 months to mine a single Bitcoin with one of the most advanced mining chips on the market, but this is a very vague prediction if you take into account the constantly rising mining difficulty.

As an alternative to classic mining, now there is cloud mining. Its essence lies in the purchase of computing power located in the data centers of the respective companies. That is, to start mining Bitcoin, you don’t need to buy expensive ASIC-miners, set up equipment, connect to the pool and keep the system working. Simply select the desired capacity, buy a contract and start mine Bitcoin. Usually, when buying a contract, potential profit per day is indicated, as well as the cost of maintaining the equipment.

The cost of mining one Bitcoin

Once we’ve figured out how long it actually takes to mine one Bitcoin, let’s find out how much it actually costs to mine one BTC. In fact, the price of mining drastically differs from country to country due to different electricity rates. For example, mining one Bitcoin in Venezuela will set you back $531 while (this country has the cheapest electricity). At the same time, South Korea, a thriving crypto hub, is considered to be the most expensive country for mining Bitcoin where a single BTC will cost more than $26,000.

In the US, the average price of mining rangers from $4,000 to $6,000 (depending on the state), but the cost will obviously go up due to a constantly increasing mining difficulty.