Dmitry Cake
Bitcoin wants to break free: $9,000 is left behind, but a strong resistance lies ahead. Altcoins have some time to grow 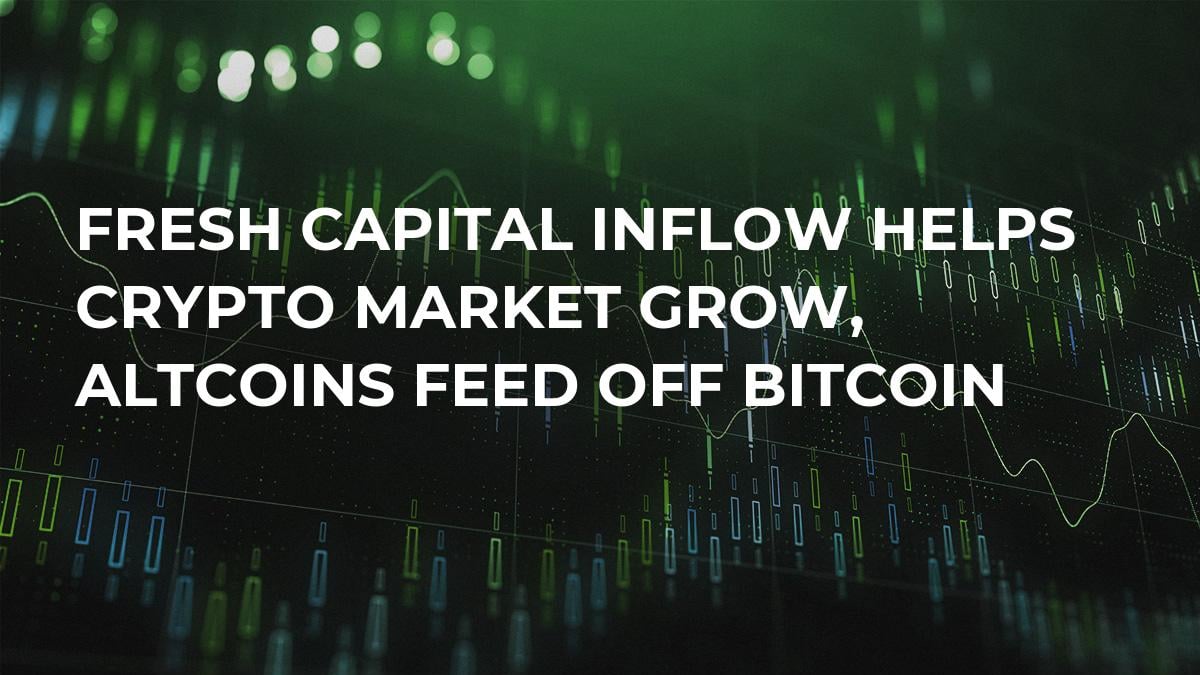 After a short pause, the celebrations in the altcoin camp continues. By the beginning of Thursday, we can see moderate growth for all assets, with the exception of only a few coins including Verge, TRON and Stellar, but even those fell back just a few percent. This growth looks forced- it’s difficult to move upward for a long time without fallbacks, heavy coins feel the gravity more, but a trend is a trend and has to be reckoned with.

And what about Bitcoin? It seems that the father has become a blood donor for the children- its dominance makes up 35.9 percent at the time of writing. Since the beginning of the year, Bitcoin has already lost more than 10 percent of the market share. However, there is no doubt that it will eventually return all losses, redeeming the altcoins’ debt with interest.

Here is the remarkable part- despite the drop in dominance, Bitcoin price itself has been growing slowly over the last 24 hours. From this discrepancy, we conclude that the market is not just stewing in its own juices, but has new players with fresh capital.

IOTA’s turn to get some positive news hype

Thanks to this, total capitalization has grown by another $20 bln and now amounts to $440 bln, which is a record since the beginning of March. Among the top 10 coins, Bitcoin Cash has shown the best results with an increase of 13 percent, boosted by the news of being added to the London Block Exchange, and is followed by IOTA which has displaced TRON in ninth place. The coin grew an impressive 20 percent aided by the announcement of IOTA Ecosystem- a “home” for developers and members of the project’s community.

In the context of a generally positive mood, Bitcoin is growing as well, although it would make more sense if it fell. Buyers are not allowing the asset’s price to fall significantly, but it’s far from setting local records. It is hard to say right now whether this is a plan by some higher powers that need a stable Bitcoin to guarantee altcoin growth. In any case, the descending channel has been broken. We left just its upper boundary on the chart- most likely, we will see testing of this mirror level.

On the new markup, first of all, we draw the readers’ attention to the ABC triangle, the activation of which will determine the future fate of not only Bitcoin but the entire market.

While prices are inside the triangle, we do not advise any purchase-sale transactions- this should only be done if one of the triangle facets is broken.

In the course of the day, we are likely to see a test of the upper facet at the level of $9,300-$9,350. If the resistance proves to be strong enough, Bitcoin will be testing the opposite side at $8,900 where the former descending channel will remind us of itself.

The surge in purchase volumes over the past 24 hours confirms investors' interest in Bitcoin Cash. Having formed the "double bottom" figure with a minimum of $1,230, the asset began the next growth stage and is attempting to overcome the previous high at $1,580. We believe that lateral trading will move to the upper level, which will become the launching pad for further movement.

The prospective goal of bulls is clearly seen at $1,800: it is confirmed by the mirror level, and by the 1.618 value of the Fibonacci extension, and by the boundary of the symmetrical figure, which suggests itself as the zone for the new lateral trading. The triple confirmation inspires confidence, but let's not forget that Bitcoin Cash trading is playing crypto on hard mode. Moreover, as usual, a lot depends on the original Bitcoin. In case of negative developments, a fallback to the level of $1,300 is possible. Therefore, once again, we recommend that readers refrain from trading until the situation becomes clear.

Ethereum buyers have attained an important achievement- the price was returned to the long-term ascending channel, formed in early April. Now, in case of correction, a price drop to $535 looks unlikely, but $575 remains possible. In order to stay within the channel, the bulls will need to do their best. Because of its steep slope, slowing down is not permissible, so Ethereum investors need to pray for continued Bitcoin growth.

In the case of a continued upward movement, the prospective target that we indicated earlier, $800, gets closer. For greater accuracy, we constructed a Fibonacci extension and got a target range of $780-$800. At the moment, Ethereum is looking better than the market, trading volumes remain stable. In case of correction, we recommend increasing long positions.

Storm clouds are beginning to lift over Ripple investors. However, while the price is in the lower register of the ascending channel, it is premature, just as in the case of Ethereum, to say that the threat has passed completely. The safe margin of movement from the current price of $0.87 is insignificant - only $0.02, while the critical level coincides with the 0.382 value of the Fibonacci retracement and the intersection of the ascending and the descending channels.

In addition to the immediate growth target of $0.96-$1, the Fibonacci expansion points to a prospective target of $1.085, but it’s a hefty 25 percent away, so its attainment in the next few days is extremely unlikely. We believe that until the end of the weekend, the trading range will be $0.85-$ 0.92, at best.