Facebook to Acquire Coinbase and Launch Its Own Crypto? – No Smoke Without Fire 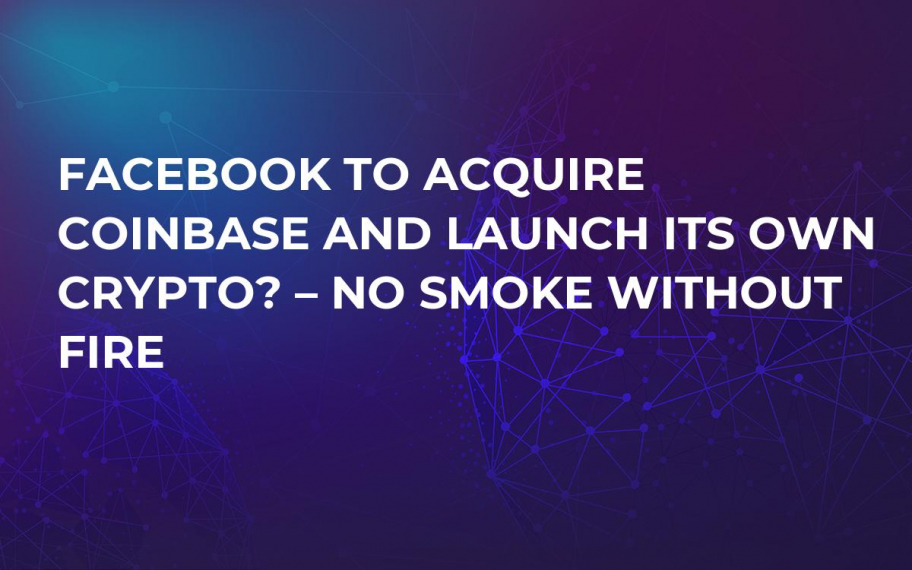 In May 2018 Facebook reshuffled its management team to a great extent and also launched a research group to study the Blockchain technology from scratch. Apparently, this research is so important that the group reports directly to the Facebook CTO, Mike Schroepfer.

The research group is headed by David Marcus, who in the past was in charge of Facebook Messenger and, what is more important, is on the board of Coinbase– one of the largest crypto exchanges in the world.

Besides, just the other day Facebook allowed back crypto ads for pre-approved advertisers, except ICO and binary options.

Previously, the Economist already briefly reported about Facebook, allegedly, wishing to buy another startup– Coinbase, to be exact. As is well-known, Mark Zuckerberg has bought his promising competitors in the past– Instagram and WhatsApp. So this time, probably, Facebook is just thinking over entering the new industry with a huge potential.

Analysts and marketers believe that if Facebook conducts this plan, it would do the social networking giant nothing but good– boost its value, audience and would also make markets of digital assets more legitimate.

Some experts, though, doubt that the Coinbase CEO Brian Armstrong would be happy about the purchase but they definitely think that Facebook might go for it.

And if you think about another ‘rumor’ that Facebook is studying Blockchain and lifted the crypto advert ban to launch its own coin, the intention to buy Coinbase starts looking even more logical.

Currently, the aforementioned exchange services around 10 mln customers and wishes to expand its active user base to one bln. Meanwhile, Facebook is used by two bln users.

If the social networking behemoth were to launch its own crypto, the coin would enjoy a two-bln user mass, which is a lot for cryptocurrency. This is much more than the most popular coins have now, even Bitcoin.

Besides, it would also serve as an actual currency for particular services offered by Facebook and not just a store of value or a doubtful investment tool. Besides, the reputation of the company may well immediately give the token a good market price at the start.

Neither Facebook, nor Coinbase reps commented the situation in any way. It is sounds, though, that Mark Zuckerberg is being torn between the necessity to cooperate with governmental authorities (some believe that initially the Facebook crypto ad ban was introduced after it was made clear that Facebook may have certain problems with operating unless it prohibits the ads) and a strong desire to support new technologies and decentralization that they bring along.

"One of the most interesting questions in technology right now is about centralization vs decentralization. With the rise of a small number of big tech companies... many people now believe technology only centralizes power rather than decentralizes it.There are important counter-trends to this – like encryption and cryptocurrency – that take power from centralized systems and put it back into people's hands."

Perhaps, if heavy-weights, like Facebook, Twitter and Google, start entering the crypto industry, it would ensure much faster adoption of digital currencies around the world and their implementation in everyday life.