Did Bitcoin Cash’s Fork Cause Bitcoin to Go Bust?

Darryn Pollock
The timing of Bitcoin’s sudden collapse to a new year low is interesting as it lines up well with Bitcoin Cash’s hard fork — is there a link? 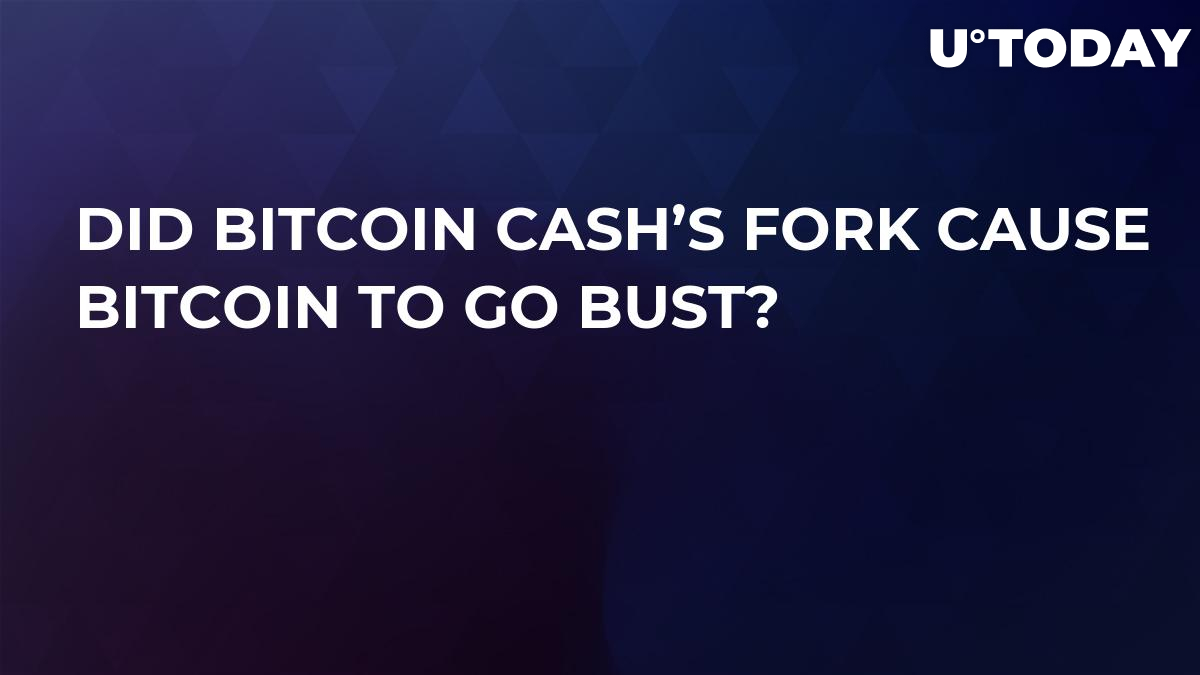 After weeks and weeks of incredible stability, Bitcoin and the rest of the cryptocurrency market suddenly fell dramatically with the major cryptocurrency falling to a new yearly low of just over $5,300. As is often the case with Bitcoin, its movements are often preceded by some sort of happening in the news, but there was no real catalyst for this fall.

However, its timing does raise a few eyebrows as the decline happened just before the hard fork of rival cryptocurrency Bitcoin Cash. BCH’s recent fork has been fraught with its own controversies as two different sides battle it out for supremacy.

Several analysts believe that the fear and uncertainty surrounding the BCH hard fork contributed to the over $1,000 fall in Bitcoin. Craig Wright and Roger Ver, both major proponents of Bitcoin cash, have begun advocating for two different versions of the digital currency.

Prior to the hard fork and the fall in the markets, there was significant growth for BCH as people flocked to get a free drop of equal measure of the new coin from the fork. However, even that growth has fallen back following the ongoing war between Bitcoin Cash ABC and Satoshi’s Vision.

Where is Bitcoin Cash heading?

Now that there has been a fork in Bitcoin Cash, one needs to see what the effect will be going further, especially seeing as many are pointing to its first major effect being a big drop in the cryptocurrency market.

Mati Greenspan, senior market analyst at social trading platform eToro, believes that with the strong-willed heads on each side of the BCH hard fork, it is likely there will be two versions.

"The end result will most likely be a split in the network resulting in two different versions of Bitcoin Cash when both upgrades go into effect," Greenspan told Business Insider.

“There is a tremendous amount of FUD surrounding the Bitcoin Cash hard fork," added Joshua Frank, co-founder of cryptocurrency analytics platform TheTIE.io. "It seems like there is a lot of confusion in the market as to what is driving price and who will emerge as the winner in the BCHABC vs. BCHSV fight."

There is a brewing competition for hashpower between the two sides currently, and this war has spilled out onto Twitter.

In our hash competition, we have seen the ABC team bring on their strongest sprinters. We are just at the trials and not yet on the finals to Marathon and they have made a remarkable burst to do a 9.9 second 100m (unfortunately in the wrong direction)

At first, Craig Steven Wright was a villain.

But now, he's just cancerous. He's affecting both Bitcoin and Bitcoin Cash in a negative way, starting a hash war which wastes resources on both chains.

It's all personal for him, he's a maniac. Don't support this fool.

While it can still be debated if the hard fork was the catalyst for the collapse, what is clear is that as long as this hash war rages on and there is this fear and uncertainty in the market, the outlook won’t be good.

“We have seen this FUD and confusion in Twitter conversations. This is reflected by the fact that Bitcoin Cash has had sentiment volatility three times higher than any other major cryptocurrency over the last 24 hours and BCH’s tweet volume is 217% higher than its 20 day moving average,” Frank added.

“With the uncertainty expressed by crypto traders on Twitter, both the short and long-term sentiment of Bitcoin Cash remain negative. It will be interesting to see how the sentiment of BCHABC vs. BCHSV as well as miner adoption play out over the next 48 hours. We anticipate this having a strong impact on future price movement.”