Dmitry Cake
EOS and NEO shake up the market while Bitcoin loses dominance. Will this tendency continue? 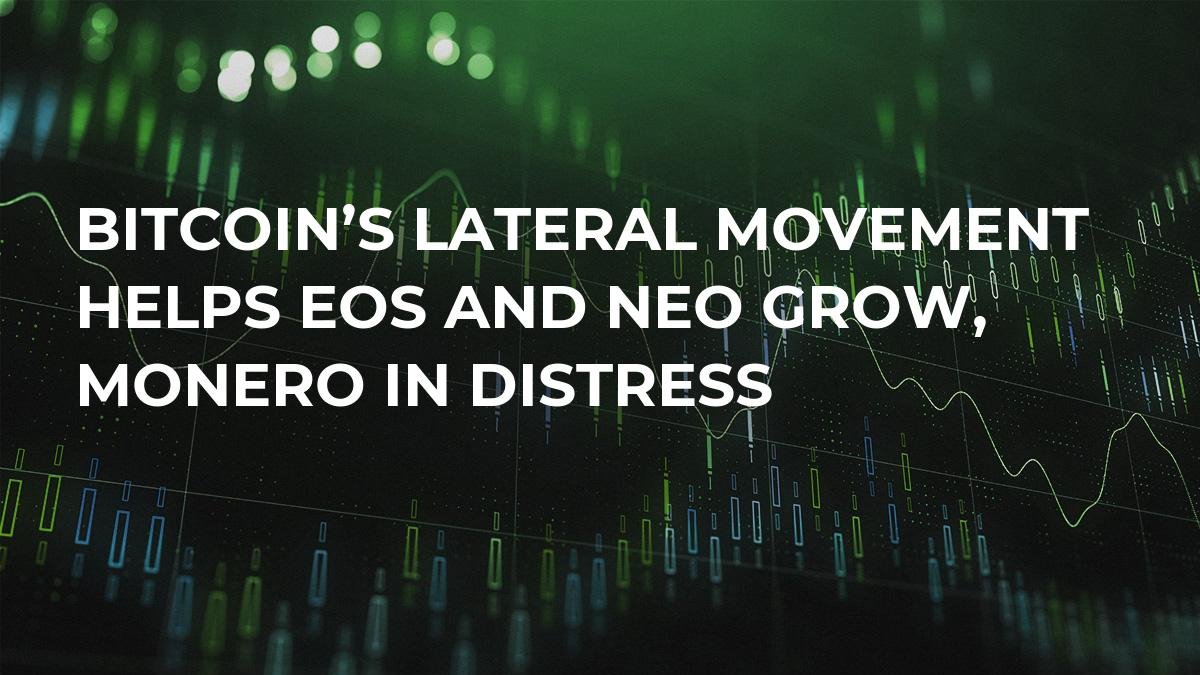 The end of April passes under the sign of the buyer, and it would seem, what difference does it make who moves the market forward- whales or guppies? However, understanding the causes and effects, as well as the internal mechanisms, and not just the external image, is the key to success in the (still) wild and ruthless world of crypto trading.

We have already learned that most of the players are guided by two basic emotions: fear and greed, which are actively exploited by the big players. Sooner or later, everyone who thoughtlessly follows the crowd will end up in their net.

On the other hand, due to limited resources, a private investor is not always able to imitate the actions of market-makers, nor is that necessary. It’s sufficient to understand the key levels from which large purchases and sales are made, and build one’s risk management on the basis of that knowledge.

By the beginning of the new week, market capitalization has approached $440 bln, while Bitcoin dominance has fallen to 36.8 percent.

We continue to believe that soon capital will begin to flow back into the main asset, but for now, altcoins are the principal driving force.

EOS is primarily in the forefront- over the weekend its price rose from $17 to $23, and trading volumes nearly caught up with Bitcoin on the Bitfinex exchange.

NEO and TRON stay in the green

By Monday, however, after the rapid growth, we see fallbacks for most positions and EOS, losing four percent, was no exception. Cardano fared worse than the other top 10 assets, with a decline of six percent; other coins stay at yesterday’s levels, for now. Only two assets are in the green- NEO, which grew by 12 percent and TRON, slowly (by four percent) but surely creeping up.

With a high degree of probability, on Monday we will see not only a correction in the altcoin camp but also a slight reduction in the price of the main asset. This is based on the daily price graph, where the uncertainty-indicating Doji candle is replaced by bearish engulfing.

On the four-hour chart, more familiar to our readers, we can clearly see that the key level for today is $9,200. It is intersected by the lower boundary of the yellow ascending channel and if the bears finally show themselves and push the price down, the path will be open for testing the zone of $8,900-$8,800, and then (but not today) $8,600-$8,400.

At the same time, it is in this range of $8,900-$8,800 that a big buyer has revealed himself twice already. If he decides to defend his positions again, then we can forget about a deeper correction for the time being. The growth prospects for today remain rather vague, the main asset has been in a lateral trade with weak growth dynamic for about a week, and investors are not well placed for a good start from current positions, so we are not likely to see a price above $9,500 in the course of the day, unless it is willed so by the whales.

Given the record growth that EOS showed since the end of the global correction (more than 500 percent), we can confidently say that the asset has firmly established itself in the top five, which means that we will give it more consideration in our reviews. After reaching $23, EOS headed for a correction the depth of which is 15 percent at the moment.

The nearest Fibonacci level, coinciding with the previous maximum of $18.5, is 0.236. This is not the strongest value, and if not for a very high level of hype, which is capable of "breaking" the rules of technical analysis, we would argue that there will be a correction to the value of 0.382 at $15.7. In the current situation, this is still possible.

But it is almost certain that the price will not be allowed to go lower. Although, after such a rally, continued growth would be simply indecent, so we are expecting lateral trading in the  range of $17-$20. When the graph shows more data for building local channels, we will be able to give a more accurate assessment of the situation. Until then, if the EOS train has already left without you, the best solution is to refrain from trading.

In the context of global growth, NEO has reached its medium-term prospective goals, which we previously indicated- on Sunday, the maximum price was $95. There is another reason to rejoice: the asset has finally formed a simple and sensible ascending channel, making further analysis of price fluctuations that much easier.

The nearest support zone is $80-$83, but it is likely that NEO will go into a lateral trade before it is reached since the width of the ascending channel now allows this without threatening further growth.

In the case of a deep Bitcoin dive, a correction to $75 is an extreme possibility, but bears are unlikely to push the price further down despite all efforts. It is premature to speak of growth targets exceeding the local maximum- first, the asset needs to form the basis for continued movement.

During the last few days, things are not going well for Monero, and we note a decrease in investor interest. Having reached the mark of $300 in the middle of last week, the asset didn’t just enter a correction but also formed a descending channel.

At the time of writing, Monero is trading at $245, the 0.382 value of the Fibonacci retracement. Next comes the support zone $230-$235, where we expect a surge in buyer activity. To say with certainty that the price will not go down would be to forget the lessons that the market has repeatedly taught us. However, the probability of this is slight. Until Monero leaves the descending channel, it is too early to talk about further growth.