Bitcoin’s Blockchain Shows Major Vulnerability- What Happens If Blockchain Can Be Breached?

Darryn Pollock
Bitcoin and Blockchain have long been considered uncrackable and infallible, but the community was recently given a shock as to how untrue that is 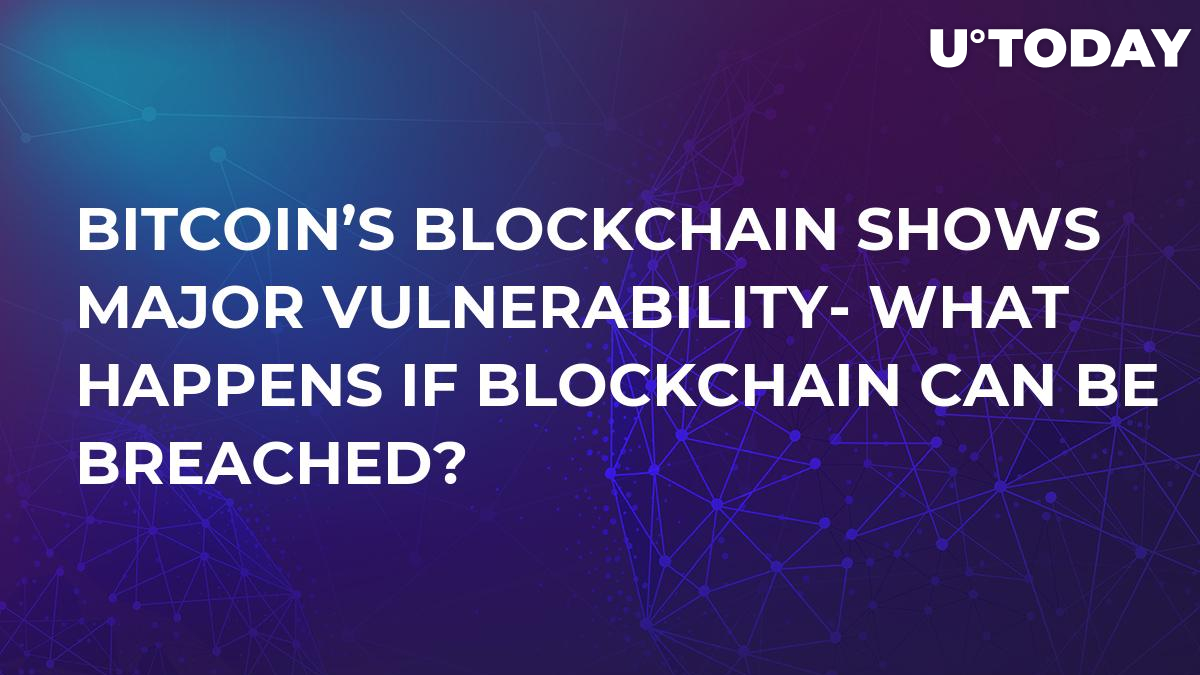 Since the creation of Blockchain, as the underlying technology for Bitcoin, it has always been heralded as completely infallible. There was supposedly no chance of Blockchain being compromised, and yet, for the past two years, it has had a vulnerability.

Recently it has emerged that there was a major flaw in the Bitcoin Blockchain that could lead to it being compromised, and more Bitcoin essentially being produced. The flaw was recently patched, but it was open to attack from some time.

It now raises major questions about the integrity of the world’s first and most established Blockchain, and as such, there is heightened scrutiny on Blockchain and Bitcoin. If there is a possibility of such a major Blockchain being compromised, should there be concerns about the technology?

The failure on Bitcoin's Blockchain has been sitting in the code for over two years, leaving the software open to a major attack that essentially could have sunk the entire system and rendered Bitcoin relatively useless.

The fault was discovered and recently patched, but on its discovery, the developers were hushed in order not to cause panic. Yet, it has now come to the fore and as such, people have a lot of questions.

The worry is that if this bug sat dormant for so long, what if there are more, or similar, yet different vulnerabilities that could compromise the Blockchain.

The issue is twofold and complicated. Because of Bitcoin’s open network of global participants, there is input from hundreds of developers driving the code forward, and because of this, and because the policies and practices are kept the same, then it's inevitable that a similar failure will eventually happen again.

However, the same process is also meant to act as a fail safe as the software has never had a more robust or stringent review process. There are now more developers than ever contributing to the open-source codebase. It is tested often- estimates suggest that tests make up nearly 20 percent of the codebase.

The future of Blockchain safety

While this failure in the code was a bug that was built in through development, and technically there was no direct compromise or break in the Blockchain. However, it has shown that as it stands, there are possibilities of the Blockchain system being badly compromised.

What is more concerning is, with the way in which technology moves, Blockchain could become subject to a system that can crack its algorithms. As the Blockchain space grown and becomes more adopted on its principles of immutability and unhackability, it is concerning that down the line it could fall apart.

Because of the impossibility of processing to pick apart the algorithm, the Blockchain remains unhackable but for flaws programmed into it. However, there is already possibilities of things like Quantum Computing that will have the power to potential pick apart all that is kept sacred in the Blockchain.

The end of trustless?

With the Blockchain being based on a trustless system, essentially meaning that any trust need only be on the algorithm, if that algorithm can be broken in the future, does that mean the end of the Blockchain revolution? Or, is there enough development to drive it forward of the malicious curve?

But, as this instance with the Bitcoin bug illustrates, the Blockchain may be in danger because of further development. As the space grows, and more is added and changed, more bugs have chances to slip in, and although they are just bug, they can also cause a distrust for the trustless.

Suddenly, to be a believer in Bitcoin as a functional financial system, the trust is extended to a network of developers, and while they are an unrelated network under no one flag, they become a core centralized feature of a decentralized system.