Dmitry Cake
Keep calm but cautious: the storm on the cryptocurrency market is not abating 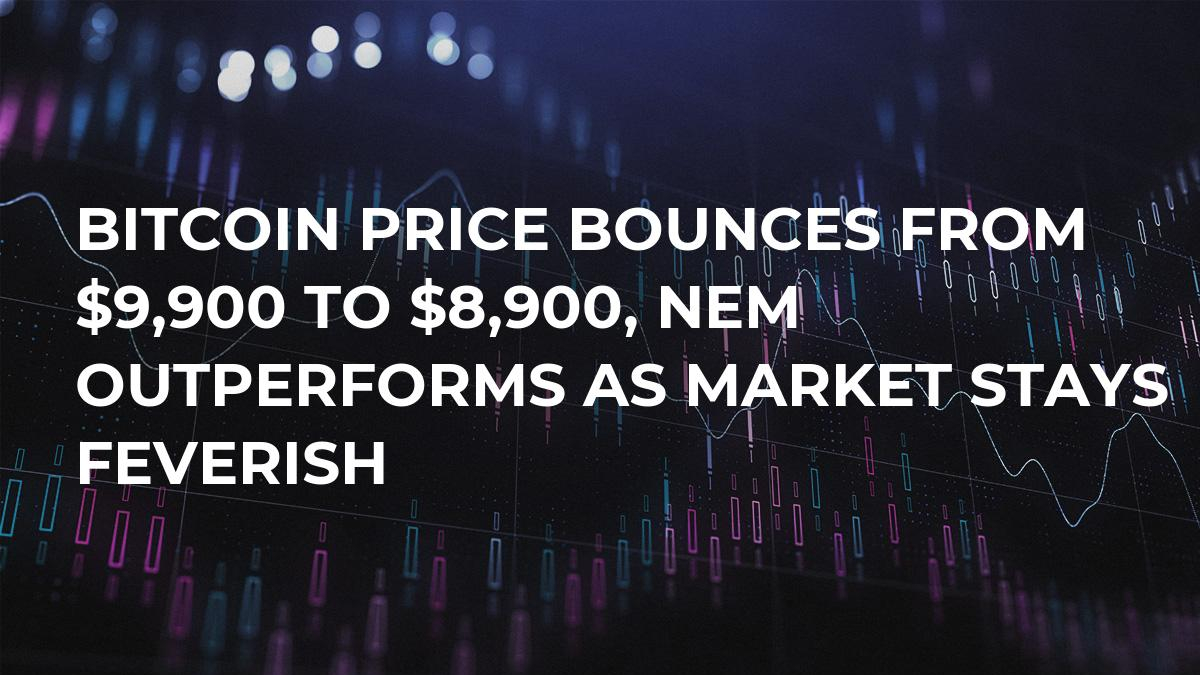 Monday came and went, first giving investors hope for a trend change, and then ruthlessly trampling it. That’s the essence of the cryptocurrency market: turbulent ups are replaced by no less turbulent downs, sometimes within the course of one day.

Bitcoin price nearly reached $10,000, and fell back to $8,900 in a few hours, dragging the other assets down with it. The good news - we described both scenarios in yesterday’s review, so attentive readers had the opportunity to evaluate and diminish the risks. The bad news - the market is still in a protracted global downtrend and there is no powerful reversal sign to be seen.

Such high volatility must be triggered by an informational background. In the absence of more fundamental news, the main media event is the publication of Goldman Sachs’ analytical report regarding the possibility of Bitcoin updating the minimums of the February correction.

We remember well that representatives of the financial giant have often changed their position on Bitcoin and cryptocurrencies in general, and how vastly different those positions have been.

Thus, we can treat this news with a healthy dose of skepticism, but we must take it into account because the market takes everything into account.

As a result of another round of decline, total market capitalization decreased slightly once again, this time to $370 bln. There was also some change in the distribution of power in the top 10 assets.

The recent growth leaders, Bitcoin Cash and Monero, are showing the worst results today with losses of 6.5 and 8.5 percent, respectively. Cardano continues to look better than the rest of the market, showing no price decline at all.

The other asset prices decreased by four to six percent, on average. Our attention is drawn to NEM, which ranks 13th on the list, while the market falls, this coins grew by 17 percent.

The reason for this behavior is that the recently hacked Coincheck exchange has commenced returning the money, stolen in NEM, to its users.

During the previous day’s trades, Bitcoin price reached a maximum of $9,900 and could have, without much effort, grown to at least $10,200, but the bulls showed indecision upon breaking the ascending channel and were promptly punished for it.

The bears’ response was swift, in the end, Monday’s minimum was recorded at $8,800, with the spread of prices being 10 percent. The fall was stopped by the 0.5 Fibonacci correction, which coincides with the mirror level.

The bulls’ job for today is not very ambitious, but it has to be done - pushing BTC price beyond $9,300 and holding it there or higher (ideally, at $9,500). This will give the bulls an opportunity to break through the boundary of the ascending channel.

Otherwise, the bears can once again test the lower boundary of the same channel and there is some probability that it will not hold. The next decline targets for sellers are the levels of $8,200 and $7,200, corresponding to the Fibonacci grid values of 0.618 and 0.786.

At the moment, the situation still does not look critical, but caution is essential. Medium-term and short-term investors can consider the possibility of placing stop-loss orders a bit beyond the lower boundary of the ascending channel.

NEM is growing in spite of Bitcoin weakness, which is, of course, a good sign for investors. The minimum value in the last week was $0.27, which is nearly eight times less than the maximum price in the entire history of the asset and is approximately equal to the November level that preceded the rapid price increase. The growth, initiated by a positive news cycle, stopped at the 0.382 Fibonacci correction and the value of $0.42.

Further local records are possible only if Bitcoin price grows. These targets for NEM are the levels of $0.45 and $0.50. The global target of the current formation $0.57 coincides with the fair price for the period from the beginning of December 2017 and the 0.786 value of the Fibonacci grid. In case of negative developments, NEM is set for a correction to $0.36, and then to the local minimum values of $0.27, where buyers can resume activity.

Potentially, EOS can be a promising competitor to Ethereum, but this has to be proven in practice, rather than based on the promises of developers. In the meantime, the asset is not doing so well, the current price is $5.70, while the January maximum was more than $18.00.

From the point of view of technical analysis, all the prerequisites for a significant further price reduction are in place. The chart shows an almost perfect bearish flag, and the goal of its activation coincides with the 1.618 Fibonacci retracement and the mirror level, creating a triple confirmation. Nevertheless, the target value $3 is almost half the current value, which means that it can only be achieved if Bitcoin price falls significantly.

Nothing is impossible in the cryptocurrency market, so we recommend that the readers set limit buy orders at the indicated price. In case of a rapid market reversal, the nearest growth target is at the level of $7.50.