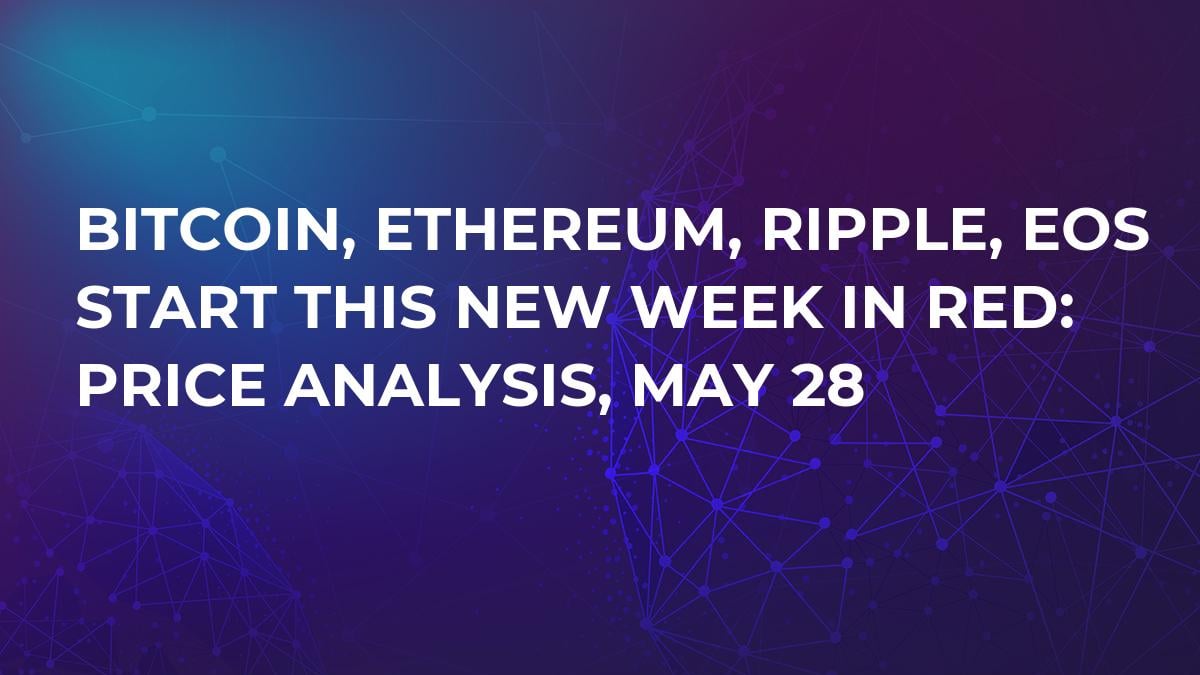 The cryptocurrency market is still unable to stand up after a shocking knockout. There were some positive attempts on Friday, but the price stood neutral during the weekend and started to decline on Monday. There is still no news to awake cryptos as they continue to slide down their trend lines like snakes.

We have two conferences on the way- Blockchain & Bitcoin Conference Australia as well as Bitcoin meetup. The last to take place in San Francisco, US. Those events may cause some positive changes, but it is still too early to analyze them.

Regardless this general negative scenario that is unfolding now in the crypto market, there is some positive news coming from different regions regarding the expansion of cryptocurrencies into the real economy. Bitcoin is now accepted by Stormy Daniels’ adult website and may be used to pay utility bills in the Czech Republic. As for Ripple, this crypto is now available for Stock app users.

Bitcoin is still unable to get off the ground as BTC price continues to slide down the trend line establishing new lows. There are no significant losses in the past 24 hours as BTC/USD falls less than two percent.

1. Red scenario (bearish). The currency pair will break through the support area at $7,199 and move below it developing downside tendency.

2. Orange scenario (neutral). BTC/USD will jump off the current support area at $7,199 and move upwards targeting the closest resistance area at $7,565, which coincides with 1.618 retracement level.

We think that neutral scenario has more chances to develop. However, bullish correction towards $7,949

ETH/USD has lost over eight percent in the past 24 hours. It is still below the descending trend line meaning bears dominate the market. There is even not a single sign for future reverse as ETH price is unable to cross this midterm trend line.

Let’s have a closer look at what is happening on the hourly chart within the Fibo retracement. ETH price jumped off 3.618 retracement level several hours ago and seems to start a bullish correction now. ETH/USD followed orange scenario and reached $596.08 resistance area. However, later the price declined towards the support area at $566.90.

The possible scenarios for ETH/USD are the following:

1.    Red scenario (bearish). The currency pair will go towards 3.618 retracement level and break it through.

2.    Orange scenario (neutral). Ethereum will go towards the descending trend line and the closest resistance area at $566.90. Once this area reached, ETH/USD will reverse downwards.

3.    Green scenario (bullish correction). The currency pair will reach 2.618 retracement level and red descending trend line, break the through and go higher aiming at the closest resistance area at $596.08.

The neutral scenario has better chances to develop.

Ripple has lost nearly six percent in the past 24 hours. The currency pair is above the descending trend line, but bulls still seem to be unable to change the situation significantly as XRP price continues to slide down.

Let’s have a closer look at the situation on the hourly chart. Ripple followed the orange scenario during the weekend but started this new week with a serious decline. XRP/USD managed to fall towards 2.618 retracement and established a new local low.

Possible scenarios for Ripple are the following:

2.    Orange scenario (neutral). XRP price will run towards the closest resistance area at $0.5914. XRP/USD is likely to reverse afterwards.

3.    Green scenario (bullish correction). XRP/USD will reach the closest resistance area at $0.5914 and cross it targeting the next 1.618 retracement area, which coincides with $0.6216 resistance area.

The neutral scenario seems to have better chances on Monday.

EOS has lost nearly four percent in the past 24 hours. The currency pair seems to be in a correction to a midterm downtrend. However, bears seem to control the market as the price is close to the descending trend line.

EOS has tested the resistance area at $12.80 but failed to break it through and went downwards. The currency pair crossed 0.236 retracement level and reached the support area at $11.92. EOS/USD fluctuates below this support in the moment of writing.

The possible scenarios for EOS/USD are the following:

2.    Orange scenario (neutral). EOS/USD will run towards 0.236 retracement level and reverse downwards there.

3.    Green scenario (bullish correction). EOS/USD will reach 0.236 retracement level and break it through targeting the closest resistance area at $12.80.

Zcash has lost nearly nine percent in the past 24 hours. The currency pair is in a deep downtrend showing no signs of recovery. It slides down the red descending trend line and breaks one support area after another.

Let’s have a closer look at ZEC/USD’s fluctuations. The currency pair seems to be unstoppable and falls all the time without even a minimum correction. By the way, Zcash has left the top 20 cap cryptocurrencies during the weekend. It has broken through 254.88 in the past several hours and seems to aim other targets that are lower.

Possible scenarios for ZEC/USD are the following: