Bitcoin, Ethereum and Monero Fight Off Bears While Litecoin Retreats

Dmitry Cake
Guess what? Another surprise! The market defies expectations as Bitcoin rises to $9,325 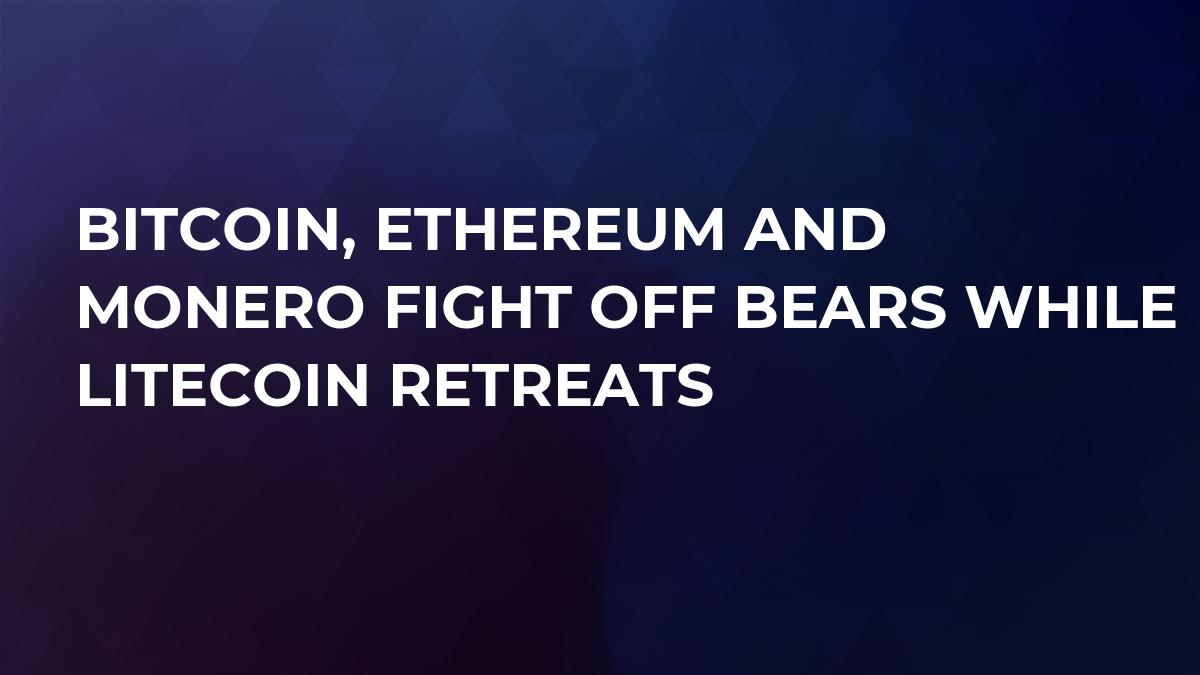 The deviousness of the market as a whole and of its individual subjects is limitless. Yesterday we had the opportunity to observe how the money gets taken away from traders who forgot about caution and risk management.

Manipulators, with the eager assistance of exchange bots, twisted prices this way and that, directing them according to their own wishes and against market orders.

As a result, correction was replaced by growth, and the crowd, having expected (not without grounds) a further decline in cryptocurrency prices, rushed to increase long positions again.

The total capitalization of the market continues to leap back and forth around the key mark and amounts to $416 bln by the beginning of Friday. Bitcoin dominance surprises us with its stability - it has not deviated from 38 percent for several days now.

The absolute majority of the top 10 coins grew by 4 to 6 percent. Stellar, having grown by 20 percent, is in the vanguard today, justifying its logo in the shape of a rocket. It’s followed by IOTA with a more modest, but still above average, increase of 12 percent.

Despite all the stars in the sky of technical analysis that aligned in favor of further correction, in the second half of past day we saw a sudden price jump to the level of $9,325, coinciding with the boundary of the parallel ascending channel.

At the same time, the chart clearly shows that in the course of 24 hours trading volumes for sales remained consistently higher than for purchases. Why was this the case? We were following the trades closely and we know the answer!

It seems that the exchanges are on a course to sustain the value of the main asset in spite of market sentiment. We are primarily thinking of Bitfinex here, but we’re sure it’s true to some extent for other exchanges as well.

As soon as a large Bitcoin lot was sold, an exchange bot would rush in and fill the remaining void with a string of minimum purchases, bringing the price back to the original value.

One can only imagine the pain this must have caused to traders who parted with long positions. The market is turning out to be a veritable Wild West!

As for potential further price movement, two options are possible. The chart shows the formation of a bullish flag, the full-fledged activation of which can bring prices to the level of previous local highs at $9,650 - $9,750. For today, this would be enough for the bulls.

At the same time, we may be dealing with a false upward price exit. Even though the bearish wedge was broken, point 1 can still serve as the door to further correction. In this case, yesterday's review, with all of its indicated goals,will not lose relevance. At present, the key level is located at $9,200. If the bulls (or manipulators) manage to hold the price above it, then the first scenario is more likely - otherwise, the second.

Ethereum investors can breathe a sigh of relief: the asset did not embarrass them and survived the correction with dignity. Even if we see a second wave of price declines, the coin has formed a margin of safety which will allow it to stay inside the growth channel for some time. The markup that we placed earlier also remains in force.

The boundary of the ascending channel remains the most important support for Ethereum. If during continued correction it is broken through, the next support for buyers is at the 0.236 level of the Fibonacci grid and coincides with $630.

This is followed by the 0.382 value of the same grid and the price $575. Considering how well the asset is holding up, our third correctional targe of $535 becomes increasingly more illusory. As with Bitcoin, the growth scenario is currently limited by the previous high at the level of $710.

Unlike Ethereum, Litecoin has left the ascending channel and, given the turmoil in the market, it will have a difficult time returning there. At the time of writing, the asset is trading at an equilibrium price of $150 and is ready to follow in the direction where its commander Bitcoin will point.

The diligence with which the remaining fans of Litecoin protected the level of $145, coinciding with the 0.382 value of the Fibonacci retracement, deserves respect. Long lower shadows of candles indicate a decisive stance, but that won’t help the asset if Bitcoin updates previous local lows.

In such a case, the next, and very likely last, stop on the way down will be the level of $137, although the possibility of reaching $130 cannot be completely ruled out.

It’s been a while since we’ve examined the Monero chart, but nothing critical has taken place in the meanwhile.

The return to the previous ascending channel while most assets have fallen out of theirs - or just barely holding on - is a good sign.

In the event of negative developments, the targets for bears are $245 near the 0.382 value of the Fibonacci retracement and $230, although the arrival at that mark is very questionable. More likely, buyers will try to hold the price at the level of $245 as long as possible, with the hope that Bitcoin’s drop (if it happens at all) will not go too far. It is too early to discuss growth targets - to begin with, Monero needs to reach its previous highs at  the level of $300.