Dmitry Cake
Volatility stays low despite expectations, Bitcoin, EOS and Ripple bounce back as neither buyers nor sellers make their move 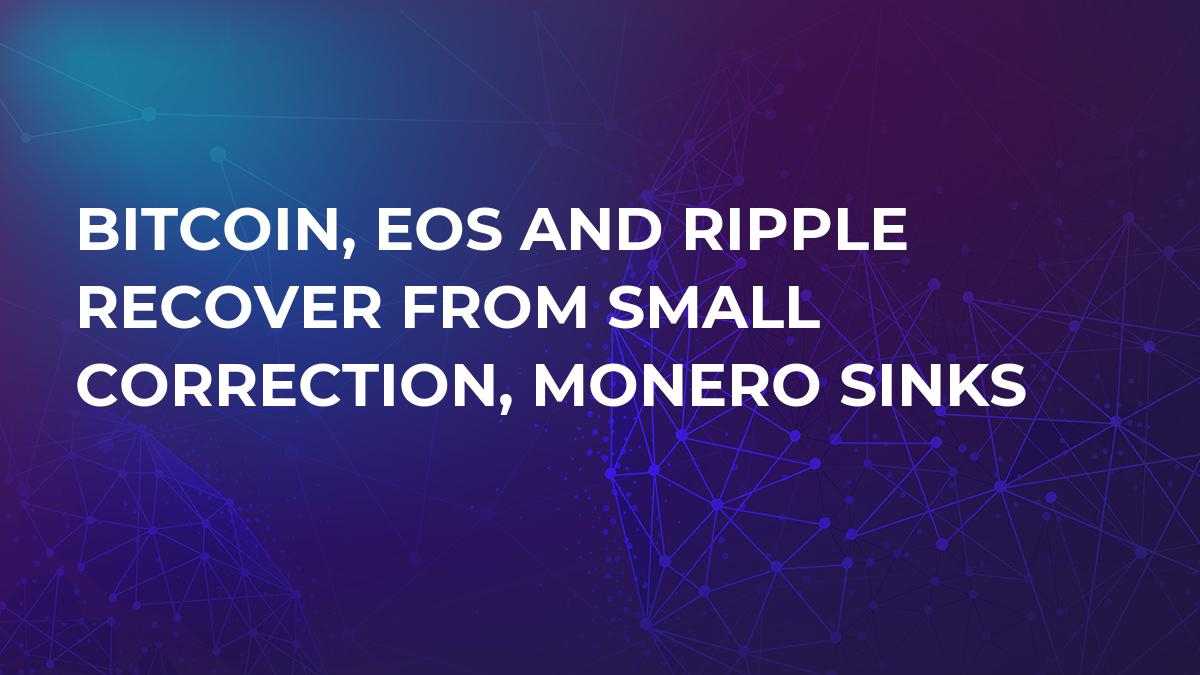 Just as for seafarers any kind of wind is better than dead calm, for a cryptotrader any fluctuation in prices is better than stability, on which, with all effort and skill, it is difficult to make any profit. We are talking specifically about crypto trading, because in traditional markets, low volatility is the norm, and margin trading, where the risk/return ratio is easily regulated by changing the size of the long or short position, is actively used to compensate for small adjustments in trading pairs.

For the cryptocurrency market, this approach can be disastrous, because low volatility here is an exception to the rule, a temporary trend. No one knows when it will end- in a day or in a month.

Therefore, we are getting the impression that players’ vigilance is being relaxed deliberately, since we’ve seen the “whales” change Bitcoin price by as much as $1,000 in a day, and the lesser the capitalization of an asset, the easier it is to manipulate its value.

By the middle of the week, market capitalization has grown to $420 bln. Recently, another trend has formed: market growth is accompanied by a decrease of Bitcoin dominance (today down to 36.5 percent), which confirms the conclusion that altcoins are the driving force. On the other hand, altcoins can lose value as quickly as they gain it, so $20 bln fluctuations in capitalization go by unnoticed and have virtually no effect on the price of the top 10 assets.

Today, also, changes in the prices of top coins are insignificant, with average gains of three to five percent. EOS has grown the most after a rapid restart, increasing by 12 percent, followed by Cardano and Stellar with nine percent. After 24 hours, Bitcoin is still dawdling at $9,000, while TRON finished its growth stage and has lost a modest 1.5 percent so far.

During the previous day’s trades, before returning to initial values, Bitcoin reached our first decline target- the minimum was $8,818, we’ll consider an $18 error acceptable. Seller pressure was contained by the boundary of the descending channel, which received another confirmation as a result. Now, if the channel continues to be relevant, a new bear attack will take the prices below $8,700.

The moment of truth on the chart could be defined by the points of intersection of the young descending and long-term ascending channels. Depending on speed of movement, they are marked by numbers one and two respectively.

In case the first scenario is realized, the breakthrough to the second decline target $8,400-$8,500, with a subsequent rebound and return above the boundary of the ascending channel becomes obvious.

But in case of reaching point two, there may be no downbreak, more than that, an upward breakthrough the formed triangle may give an impulse for new purchases and cancel the scenario of further correction.

As we expected on Monday, after the fallback EOS continued to trade in the range of $17-$ 20, and the minimum price since the beginning of the week was $16. Buyer support was provided by the nearest level of Fibonacci retracement- 0.236. For now, trading volumes remain high, but yesterday the lion’s share of transactions was made up by sales, so in the upcoming days we may see a slight decrease of investor interest in the asset.

Due to the spasmodic movement of the price, there is still not enough data for building channels according to the rules of technical analysis. Therefore, we cheated a bit and built an ascending channel on the basis of the mirror level, to which the price of the asset was previously sensitive. Today we expect a decrease in the volatility of trades with an equilibrium price of $18. Meanwhile, the previously mentioned range of $17-$ 20 is unlikely to be expanded. It is still best to refrain from purchases.

A stable Bitcoin continues to give Ripple the opportunity to please investors. The ascending channel has held, and the price has formed some margin of safety. Until Bitcoin marches on to conquer the second decline target, this margin should be sufficient.

The situation is complicated somewhat by the approach to the boundary of the descending channel. Its intersection with the ascending channel forms a triangle, which will be resolved within 24 hours at the most. We do not exclude the possibility that it might be activated upwards, taking prices to the level of $0.88-$0.9.

The set of decline targets at $0.77 and $0.70 remains relevant, but the probability of their attainment, especially the second one, has slightly decreased since yesterday.

There is still no cause for joy in the Monero camp. It’s true that the support of $230-$235 has held, but trade volumes are not indicating any enthusiasm from buyers, and the asset itself continues to move in the lower register of the descending channel.

In the course of the day, we expect a repeat test of $235. If it does not hold (especially in case of negative developments on Bitcoin), the possibility of a decline to the range of $213-$220 will be higher.

In this case, correction will reach the 0.618 value of the Fibonacci grid, and if even at this level investors remain indifferent, we will have to reconsider the attractiveness of the asset for the medium term.

Nevertheless, the huge amount of capital that came into Monero on April 18 is still there, and will certainly be defended- there is no reason to panic at the moment.