Darryn Pollock
As the market continues to see gains, it is the altcoins that are experiencing massive short-term rallies suggesting that it could be altcoin season again 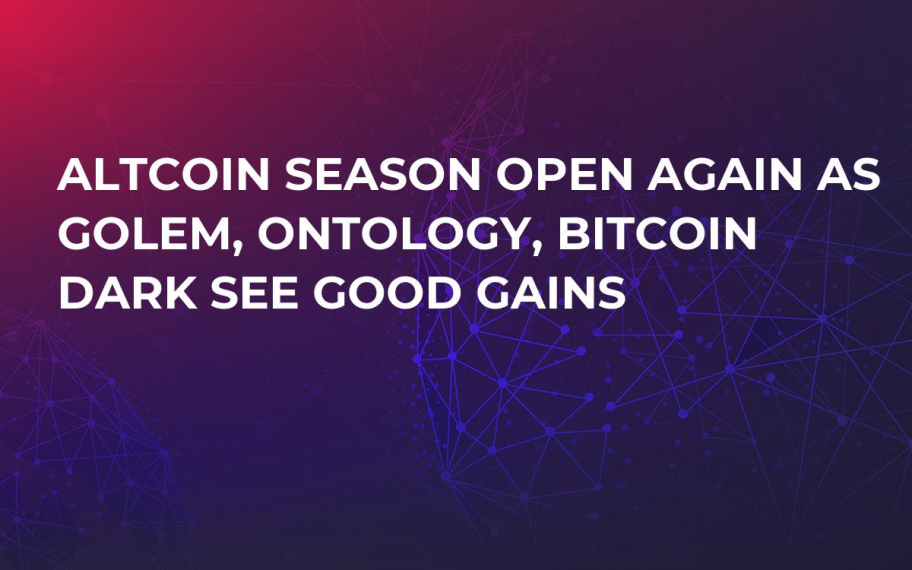 The entire cryptocurrency market is experiencing good growth as the market cap approaches the 0.5 tln mark, having broken $440 bln in the last 24 hours. It is down to some positive growth in Bitcoin, the usual catalyst to movement, but also thanks to some big moving altcoins.

The likes of Golem, Cardano, Ontology, Bitcoin Cash and even Bitcoin Dark, have all helped add some much-needed confidence into the market and helped investors branch out to altcoins a little more.

Golem, an Ethereum-based platform that is aiming to create a supercomputer network, has been benefiting firstly from the growth of Ethereum, which surged seven percent on Thursday, experiencing several buy spikes over the last 12 hours.

Triggered by the listing of Bithumb, the biggest cryptocurrency exchange in the South Korean market, the price of Golem increased by more than 50 percent. However, this spike is likely to be fleeting as it was seen when Gloem was listed on Binance.

Immediately after the listing of Golem by Binance last week, the world’s largest cryptocurrency-only trading platform, the price of the coin plunged by more than 20 percent, as traders bought the rumor and sold the news.

The best performer across the top 100 coins by market cap is actually little-known Bitcoin fork, Bitcoin Dark, which has seen a massive 137 percent growth spike in the last 24 hours alone.

While Ethereum may not be experiencing such volatile jumps in price, it's steady gains have certainly contributed to the growth of coins based on its platform- such as Golem. There is also positive growth for Ontology, which has been growing steadily for the past few weeks.

Often, the price trend and momentum of Ethereum represent the status of the token market, as tokens like WanChain and Golem, even EOS which is soon shifting off the Ethereum chain, are based on the Ethereum network ERC20 token standard. A strong performance by Ethereum usually translates to strong gains of tokens and thus far, tokens have followed the trend of Ether and recorded large gains.