Why is Ripple Suddenly Trying to Make Headlines With Madonna, Clinton and Jabs at Bitcoin?

Darryn Pollock
Ripple has made some big publicity ploys recently, enticing Bill Clinton and Madonna on their side as well as taking some big swipes at Bitcoin 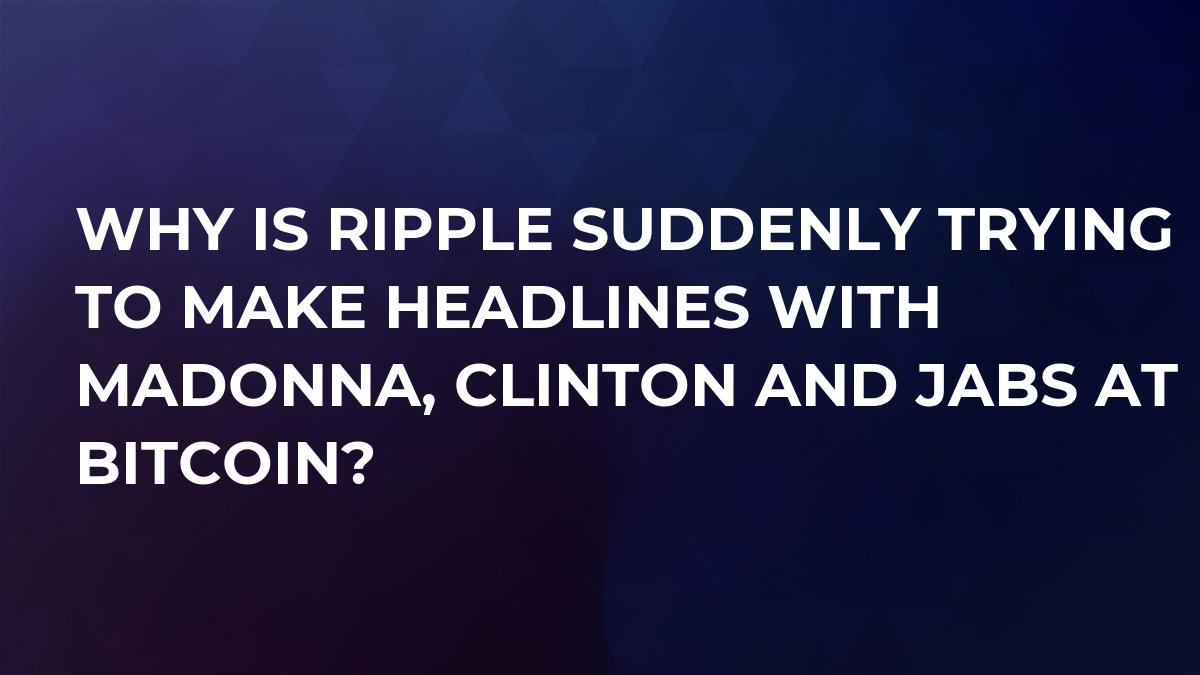 Ripple, the cryptocurrency that is focused in on being a payment system between banks, has put forward a charm offensive to try and grab some headlines recently. They have enlisted some big celebrities, entered a charity space, and also slandered Bitcoin in order to boost themselves.

One has to wonder why Ripple is suddenly coming out from under their rock having quietly gone on with their primary work for so long. Bill Clinton will be the keynote speaker at their September gathering while Madonna's Malawi charity will be receiving donations from Ripple, but the most surprising move from Ripple is their slander of Bitcoin.

In the past few days, Ripple has made the headlines, and set Twitter alight, with a few moves that are not directly related to their primary role as a potential banking intermediary cryptocurrency.

The headlines have surely propelled Ripple in the headlines again, after going slightly undercover for a few months. However, the question needs to be asked is why they are suddenly making so much noise.

The first piece of news was the announcement that former president of the US, Bill Clinton, would be the keynote speaker at Ripple’s annual Swell conference. Clinton’s announcement seemed to achieve the goal of attracting attention to Ripple, however, a lot of that attention was in jest as Twitter reacted with jokes and memes about the former clandestine president.

Ripple on XRP: "I did not have monetary relations with that token"

However, regardless of the associations to Clinton, the former president does bring a lot of gravitas to the event and is likely to boost the profile of the conference.

Ripple has also recently announced that it will be making more charitable donations- something it is no stranger to, having donated to public schools in the past. However, this time they are again using a celebrity link to gain a bit more media traction.

Ripple announced that for the month of August, it will match public contributions made to Raising Malawi, an NGO established by Madonna, to support vulnerable children in the small, African nation.

Again, this charitable act should not be chastised, but the association with a celebrity with the pulling power must have pre-planned to have ulterior motives.

The final big move by Ripple which caught it in the headlines was when Ripple Labs’ Chief Market Strategist Cory Johnson took some hefty swipes at Bitcoin on Fox Business. Ripple has often been disassociated from the other major decentralized cryptocurrency because of Ripple Labs’ control of the currency, and it has seen them counterpunch every now and again.

CEO Brad Garlinghouse likened Bitcoin to Napster. He argued that, like Napster, Bitcoin was a bold first step that would eventually be overtaken by superior technology that solved real-world problems and engaged regulators

“Money should move as fast as ideas move as fast as data moves and right now it doesn’t.”
-@CoryTV on @FoxBusiness with @MorningsMaria. Watch the full segment on #XRP, #Bitcoin and more. https://t.co/p4xQeS4bdP

What is Ripple’s game?

Because of this triple offensive headline-grabbing, it is prudent to break down the different intentions of each action. Clearly, Ripple’s association with Clinton will bolster the company’s reputation, especially in their attempt to work with regulators and institutionalized systems.

The Madonna link is another step in their aim to be seen as a good corporate citizen as it is the second big gesture of charity. And to do it on the tailcoat of a celebrity of Madonna gives that news many more legs.

Finally, Ripple has been trying to prove it is a superior technology for some time now, harping on about Bitcoin being original but outdated.