Think Crypto is a Bubble? What About Silicon Valley Startups Then?

Darryn Pollock
Many feel that the cryptocurrency and ICO model is a bubble, but they should look at Silicon Valley startups, in the same manner, more closely 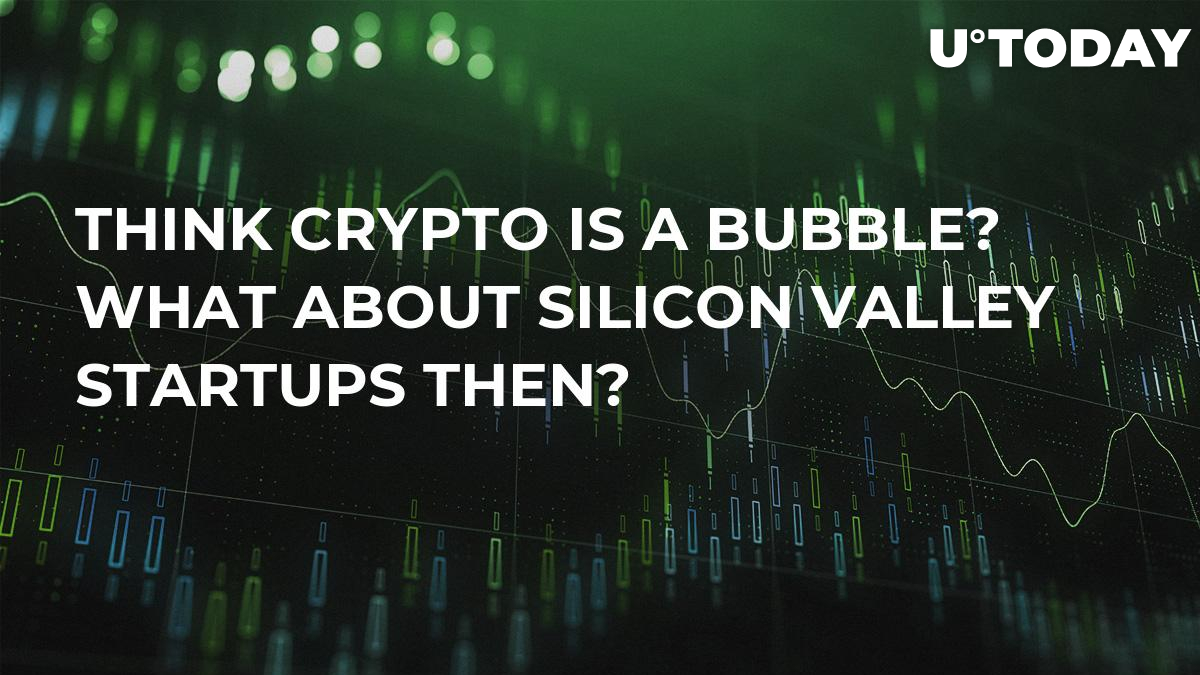 Many have come forward and said that the cryptocurrency ecosystem is a bubble, and a big part of that has to do with the way in which the ICO sector has operated, mimicking the Dot Com boom that was seen in the early 2000s.

However, those same commentators should probably look a little closer to home if they are looking for a bubble, especially one predicated on promises of equity and growth in user base.

ICOs and startups follow a very similar model in terms of capital raising. The biggest deviation, however, is the inclusivity of an ICO whereas startups look to major investors for their funds, and then turn their user base into the commodity.

This play from startups is much more open to collapse whereas the ICO model of individual and open investing allows individuals to become members, rather than a commodity, of the project.

The Silicon Tech Bubble is hitting its peak

Many think that the tech bubble popped in 2000, however, it has emerged as a slightly different beat. We are seeing instances of overvaluation creeping back into the space, especially when successful startups are being taken to IPO.

Venture Capital-funded companies, some reaching the status of unicorns, are dying all the time as they enter the market. These companies are severely overrated when they reach the billion dollar mark, as much as by 50 percent- according to research conducted by Will Gornall at the University of British Columbia and Ilya Strebulaev of Stanford.

Of those 135 unicorns examined, the researchers estimate that nearly half, or 65, should be more fairly valued at less than $1 bln.

This is already a huge indicator of a bubble brewing in Silicon Valley. Keith Wright, instructor of accounting and information services at the Villanova School of Business, explains the way in which this overvaluation occurs.

“Investors focus on growing the unicorn customer base, not turning a profit. New regulatory conditions, including wildly separate share classes, which give some shareholders significantly more rights than others, have resulted in a danger of widespread overvaluation,” Wright said in an interview to CNBC:

ICOs and their similar model

People will argue that at its core, ICOs are often overvalued as well, but while there is a similar model between startups and ICOs trying to raise capital for the company, there is also one major difference.

Startups will go to venture capitalists and other sources of major resources in order to gain capital, and in exchange, as Wright states, these shareholders get huge rights. However, the situation with an ICO is that there is no barrier to entry for individuals to ‘invest’ in the company- it is accessible to everyone.

Essentially what this allows is any person who invests in an ICO becomes a member of the company and thus has big and powerful rights over the way in which the company functions.

If, for example, a Blockchain project attempted to raise funds through an ICO by saying they will have complete control of their users and user data once the product launches, it would be considered ridiculous and the project would fail without even starting.

However, with startups, only the wealthy investors have members rights, and those who utilize the project become the commodity with their data and information.

A change in scene

Venture capitalists are starting to become dinosaurs, and the entire startup space is being reworked with the advent of Blockchain and ICOs. But it is not only the startups that are looking at new disruptive technologies.

“Large incumbent companies are learning how to adopt emerging and disruptive technologies faster than ever. Companies such as Actesy.com from St. Gallen have recently perfected and piloted new software that enables Fortune 500 companies such as Porsche, Roche and BASF to quickly and easily adopt emerging technologies while maintaining their existing highly expensive, entrenched legacy solutions,” Wright adds.

“Previously, it may have taken 10 or more years to replace enterprise-wide global systems. When large companies learn to sustain their competitive advantage through disruptive technologies, the unicorn game is limited.”

Trust is the ultimate catalyst for any community. There are projects like U°Community that build a transparent community platform with dynamic reputation. Users could create content, interact with people, direct their own communities, run businesses, and even build dApps without having to leave the ecosystem.

The shift at the top is happening as the incumbent companies look further afield than those big, and overvalued, unicorns in Silicon Valley. And at the grassroots level, individual investors, such as those being seen in ICOs are starting to become as big and as important as your traditional heavy investor.

The exclusivity of backing a project no longer fits the mark, rather the crowdfunding, ICO model is what is working in today’s world, and as such Silicon Valley startups that are still pursuing becoming unicorns and gaining too much funding to become overvalued, are blowing up that tech bubble all over again.

The real crux of the matter between a startup using Venture Capitalist money and that of an ICO using funding from individuals who back the project is the support. Major companies fund projects hoping to mold and control them for their own gains, and they have little to no worry about the company and its users needs or wants.

At the same time, when it comes to an ICO, the people investing in it, have a vested interest in the success of the project, they are supporting it and wanting it to succeed.

When it comes to defining a bubble, overvaluing a project just to pick up users and without looking at the potential and growth of the company, it becomes quite apparent which is more of a bubble.