David Dinkins
Today’s release of Bitcoin 0.16.0 will accelerate SegWit adoption, and decrease network congestion, by making SegWit the default transaction type for all users of the Bitcoin core wallet. 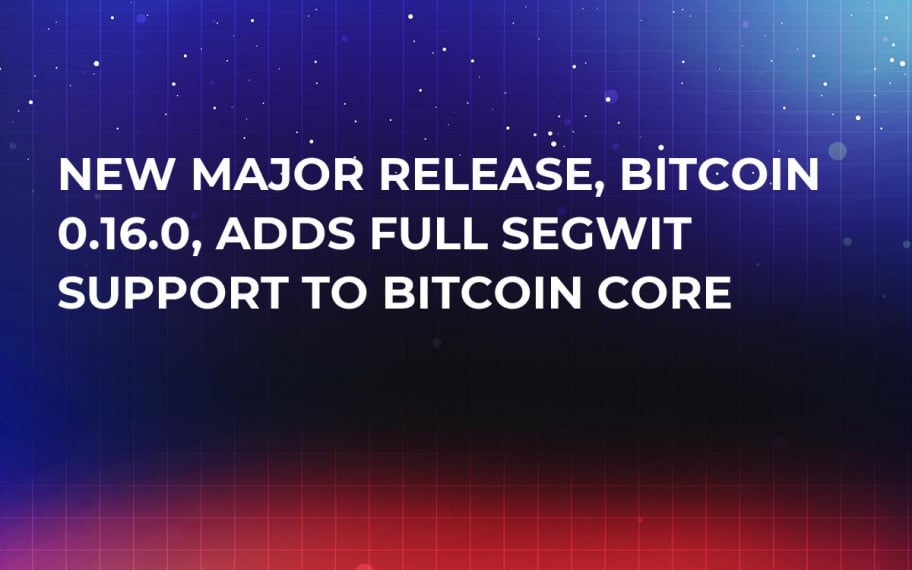 Bitcoin 0.16.0 has been officially launched today, with full support for Segregated Witness (SegWit). SegWit, while still optional, will be the default address and transaction type. Full support for SegWit is expected to increase the technology’s adoption significantly, further paving the way for Lightning Network.

SegWit involves separating a transaction’s signature from the actual transaction data itself. The signature or “witness,” is, therefore “segregated” to a different part of the block. Bitcoin still retains its infamous one MB blocksize limit, but the network doesn’t count the size of the “witness” data when determining if that block limit has been reached. This effectively allows for more transactions in each block.

SegWit increases the theoretical maximum throughput of the Bitcoin network by about 250 percent, although the actual impact will be less than that due to a mix of transaction types in each block. Also, SegWit is optional, so people are still welcome to send legacy transactions (although they are more expensive than transactions sent using SegWit).

Since SegWit is both new and optional, uptake has been slow. Many popular wallets have not yet implemented support for SegWit, and until recently, virtually no major exchanges used it. This has changed in the last week, with both Coinbase and Bitfinex announcing their rollout of full support for SegWit. The release of Bitcoin version 0.16.0 will speed the adoption of SegWit even more by making it the default transaction type for the Bitcoin core wallet.

The new software upgrade also turns on “replace by fee” (RBF) by default. With RBF, users have the option to increase the priority of their already sent transactions by increasing the fee paid to miners. Suppose a user sends a transaction with a fee that seemed appropriate at the time, but sudden network congestion causes the transaction not to be included in any blocks for a while. If RBF has been enabled in their wallet, this user can resend the exact same transaction, but with a higher fee. The first transaction will be invalidated, and miners will prioritize the new transaction due to its higher fee.