What is NEO - Simple Explanation for Beginners

George Shnurenko
Being as fascinating a model as NEO is, the promise of a prosperous future is eminent. 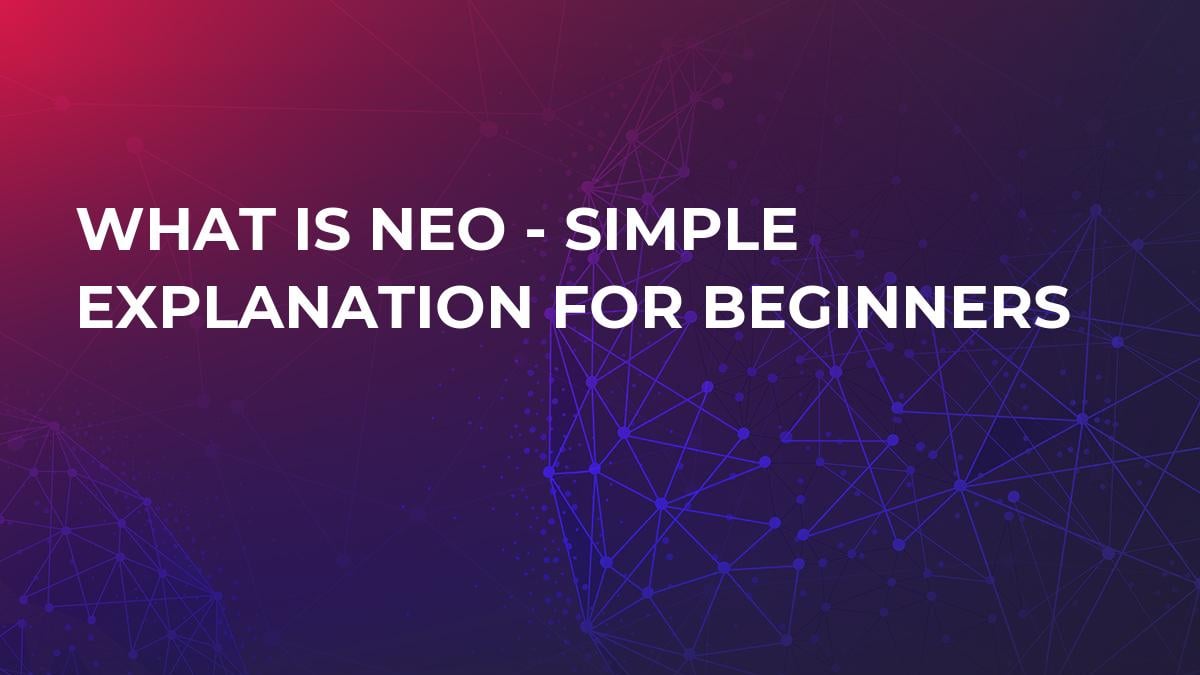 With most businesses and people taking advantage of the internet to perform a significant portion of their business and even social transactions online, it is evident that the need for digital money and other forms of virtual assets is eminent now more than ever. Any keen mind should see that, pretty soon, the people who have taken the time and effort to accumulate such digital assets will be at a massive advantage.

Previously referred to as Antshares, NEO is one of the leading cryptocurrencies on the market today. In fact, due to its explosive growth and enormous rise to prominence, trends predict 2018 to be the year it becomes a market leader. Being China's initial decentralized, open-source blockchain, and having emerged a few years after Ethereum, NEO is often viewed as China’s reply to the former. By spanning the gap between traditional and digital assets, NEO hopes to generate a smarter economy characterized by improved profitability, simplified task execution, and sustainability.

As a cryptocurrency and blockchain network, NEO is designed to be a scalable platform of decentralized applications. Its primary asset is the solid NEO token. This token produces Gas tokens, which are divisible and therefore, can be used to pay for dealings made by applications on the platform. Unlike other cryptocurrencies, NEO can be coded using a variety of popular programming languages such as C++ and JavaScript among others.

Some Basic Facts About NEO

Launched in 2014, the Network relied solely on its founder, Da Hongfei and his development enterprise, Onchain for funding and facilitation. After three years operating as Antshare, the blockchain was rebranded to NEO in 2017. In March 2018, Onchain, NEO’s parent company launched a voting rights distribution campaign. It offered one ontology token for every 5NEO a user held in his or her wallet. The token owners would have rights to vote on issues such as identity verification, system upgrade, and other platform control matters.

Creation and Distribution of NEO

In the Genesis block, a wholesome figure of 100 million NEO was produced originally. Initial investors purchased half that figure. The remaining 50 million NEO were secured in a smart contract. Annually, the development team unlocks 15 million tokens and uses them to facilitate long-term growth and development plans. These NEO tokens also produce a gradually deflationary quantity of GAS token used to pay for transactions on the Blockchain. To control the inflation ratio of GAS, the system uses a decaying half-life algorithm. The algorithm spans the production of 100 million GAS tokens over an approximated period of 22year.

With its Byzantine Fault Tolerance mechanism, NEO is capable of supporting up to 10,000 transactions every second. To attain a consensus and authenticate transactions on the system, accounting nodes are arbitrarily nominated. This selection is made in a style comparable to Hyperledger and Stella Fabric using coinciding networks of trust. Employment of subtlety different implementations to solve for the Byzantine General’s problem is also vital for efficiency during the selection protocols. However, since the mechanism depends on majority rule concepts to function, one cannot hard-fork into two distinct chains at the same time.

NEO’s Features and Their Applicability NEO’s core features and functionalities revolve around tools that are designed to allow developers to deploy and gauge smart contract protocols on the network proficiently. Some of them are further explained below.

This feature provides developers a regular workflow and pattern for building devolved applications. Simply put, all token using this tool can spontaneously transact with one another. This interconnection facilitates communication between applications like decentralized exchanges and more intricate cross token categories. Other related features include the X.509 digital identities, which allow developers to assign real-world characters to tokens. This enables the network to comply with regulatory necessities of the industry. Also, to enable NEO tokens to communicate with tokens on other blockchain networks, a developer must have the NeoX protocol. Equally essential is the NeoFS, a devolved file distribution service centered on the InterPlanetary File System. Finally, to protect the system from quantum computers, NEO uses a lattice-centered cryptographic appliance to create problems that quantum mainframes cannot resolve.

A digital, trust-less and borderless innovative mode for two or more parties to interface, the smart contracts have been quite a development to the crypto business. These contracts have quite simplified the governance of treaties between transacting parties on a network. This feature collaborates perfectly with computer science’s conditional programming arrangement. With this development, digital signatures and keys have replaced the traditional pens, thanks to NEO. These smart contracts also support numerous popular programming languages using the neoVM compiler; Java, Microsoft.Net, Kotlin, Python, and Go being some of them. However, one has to isolate the smart contract codes in the neoVM for scalability and system security purposes. Besides, to avoid replicating a complete virtual setting and thus, optimize resource utilization, neoVM uses a lighter version of Docker.

This feature is an improvement to the traditional proof of stake or Proof of Work Consensus Mechanisms. In addition to enabling the network to repel Byzantine General Problems, it also sustains consensus even when some terminals display malevolent intentions. This would have been too much to ask of the earlier protocols. DApps

The Supply of NEO and GAS Tokens

Unlike other cryptocurrencies that have only one token, NEO has two kinds. This is the NEO and GAS tokens. The NEO tokens operate as the investment that one makes in the blockchain. Its total supply is capped at 100 million tokens, which were mined during the original block creation. These coins are to be used for network management, change, block creation, and related consent requirements. Nothing like tokens from other blockchain networks, the NEO token is indivisible, and can only exist as a whole number. Due to this unique feature, difficulties were experienced when attempting to pay for transactions whose costs did not merit an entire NEO coin. This necessitated the creation of a more flexible token; thus GAS.

Similarly, GAS has a 100 million token supply hard cap; and it is the fuel for the NEO blockchain. This token was not pre-mined; it is gradually generated by a decay algorithm that will take approximately 22 years to hit the 100 million ceiling. The fact that this unit is divisible to several decimal places makes it ideal for paying for transactions such as executing smart contracts, running DApps, and providing developers and miners incentive for sustaining a smooth flow of affairs on the network.

To acquire a digital wallet and start producing GAS, you need to purchase NEO and keep it in your purse. The concept is similar to that of buying and holding shares or stake so that you can earn dividends. A few fiat currencies such as the US dollar can be used to conduct the trade. In addition to that, you can also use other cryptocurrencies such as Litecoin, Ether, and bitcoin among others. Purchasing these digital assets, however, is an expensive approach to their acquisition. A more sustainable and profitable method would be to mine the NEO block.

How to Purchase NEO

You must make several preparations and considerations before you can buy NEO. One of them is to select a suitable exchange. An ideal exchange is one that lists NEO with one or several currency pairings. Once you have located such an exchange, provide your email, open an account with them and create a password for it. You may also be required to provide an address, your name, and identification proof before you can transact.

The next step will be depositing some funds into your account. Whether you use digital or fiat currency will depend on the platform that you are using. Some traders only allow the use of cryptocurrency. Therefore, you may have to deposit bitcoins, ether, litecoin or any other NEO paired cryptocurrency. If your selected platform allows the use fiat currency, then your US dollars may prove to be useful as well.

Navigate your account to the exchange section and look for the currency listing that you are comfortable with, and select your market order. At this point, you merely have to input the NEO quantity you would wish to purchase and select the purchase prompt.

Upon completion of this transaction, you will be in possession of NEO tokens. These assets will be on a digital wallet availed to you by the Crypto Exchange. These tokens cannot generate GAS from this wallet, however. You will need to transfer it to your portfolio.

Unfortunately, NEO users do not have many options when it comes to choosing a personal wallet. The initial adopters had several options depending on the tools they used. These alternatives include the ledger Nano S for Hardware Wallets, NEO GUI, NEO CLI and NEON Wallet for desktop wallets. For Web Wallets, they had NEO Tracker and NEO Wallets. Ansy was the only Paper Wallet available.

NEO’s sister firm, Onchain is a well-established and reputed company in the financial services business niche. Currently, NEO is also in association with the Japanese and Chinese government and several other major corporations such as Alibaba. NEO is currently operating as a public cloud. However, the Chinese government has a much bigger strategy of establishing it as a market leader in the Blockchain industry. Their target is to lure developers into using their platform and tools and improve the ecosystem. The City of Zion group is a clear manifestation of these intentions.

All NEO available currently is either pre-mine or a result of the Proof of Stake. The latter permits users to produce additional tokens since they are holding NEO in their wallets. Also, despite having distributed tokens via a crowdfunding occasion aimed at encouraging people to invest, NEO still managed to make profits from the sale. The fact that there was no mining and only issuance was used implies a centralized distribution tendency in the network.

Also, if you can recall earlier in the article, 50 million NEO was reserved for development among other purposes. However, having such a large sum of tokens at the disposal of developers could result in dumping and other tendencies that may impact the crypto economy negatively. In addition to the above, it is common knowledge that for any substantive long-term results on a cryptocurrency initiative, the network adoption effect is a must. Unfortunately, despite the hype, nothing of the sort has happened at the developer level of the network.

What Does the Future Hold for NEO?

Being as fascinating a model as NEO is, the promise of a prosperous future is eminent. However, no one honestly can tell the certainty of it. Many can only speculate that its value is bound to skyrocket this year. While the explosive growth in its value in 2017 was extraordinary, the fact that it still shrunk brings in questions about its consistency.

The fact that it has peaked so early in the year is promising brighter tidings. Nonetheless, whether this increment in value will continue steadily as it has been so far, or it will fall again, is the question on everyone’s mind.

On the bright side, NEO operates on a specially produced proof of stake mechanisms, which is debatably the best there is in the crypto industry. Also, the fact that NEO’s network is well protected from quantum computers should put it at a strategic competitive point in the market.