How to buy NEO in USA: A Step-by-Step Guide

George Shnurenko
In 2017, NEO was among the top investments making an increment of up to 20 dollars from 0.14 dollars to 22 dollars for a single piece. 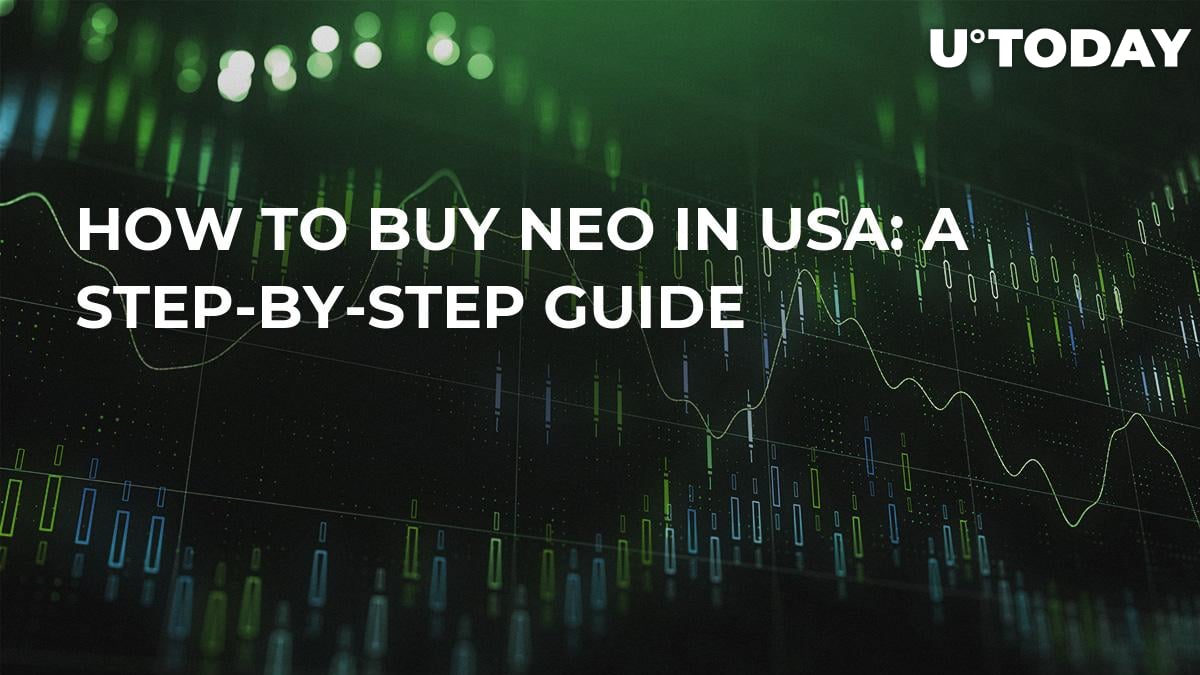 In 2017, NEO was among the top investments making an increment of up to 20 dollars from 0.14 dollars to 22 dollars for a single piece. To be able to enjoy the benefits of long-term appreciation of prices, people buy NEO from trustworthy exchange platforms that also allows for the claiming of GAS while keeping NEO in their secure wallets. NEO is very transformative and could positively impact the financial level. It can shape the future by the use of the Smart Economy concept by incorporating transactions via it.

NEO is a new feature created in China seeing its development via a Shanghai company. Formerly known as Antshare, the company rebranded to its current name NEO. The same system (smart contract system) used by Ethereum also gets supported by NEO. Most people refer to the platform as the Chinese Ethereum. The platform might share some similarities as that of Ethereum. However, it is on a class of its own. It enables one to code it with diverse languages such as Go for it, C/C# and Java, unlike Ethereum which only uses their primary solidity language. DAPPS among other ICOs are the same regarding functionality when compared to what the company offers.

Trading of NEO includes making a selection of specific steps. There are steps involved in the selling of NEO.

Acquire an NEO Wallet directly from the website is the most sensible way to acquire an NEO wallet. You will find that it has numerous features that include mobile, web and desktop versions. It is important to note that there are other options too and you need to be wary of NEO Wallet scams.

The option is very popular with its desktop wallet advantages featuring Mac, Linux, and Windows. The NEON wallet gets equipped in that it can hold the specific NEO assets that include NEO and GAS. The upper hand being the users can still receive and send them.

An advantage of the wallet is that the users holding NEO can even claim GAS. The feature is not a direct development of NEO developers, but instead, it is from the City of Zion. The wallet is known for flexibility, functionality, and ease of use in desktop operating systems. It is among the reasons why most people rely on it. The security surrounding the user's private keys is high since the info gets not retained on their servers.

Sadly for Linux or Mac users, the Graphical User Interface offered by the NEO Project only makes it available for Windows.

The NEO Wallet is a web wallet developed by the NEO community to enable users to receive and send NEO assets as the hold on to them while still claiming GAS.

NEO Tracker developed the NEO Tracker Wallet for people who prefer a web wallet. The developers made it an open source that increases its functionality and ease. The wallet also allows users who are holding onto NEO to claim GAS. Users can make use of the third party wallet to store, receive, and send NEO and GAS while at the same time avoiding NEO Tracker servers to store any data.

One can send or store GAS and NEO using the paper wallet offered by Ansys. This paper wallet enables you to save your value while offline and still secure it for a length of time. The downside, however, is that owner will not be able to claim GAS tokens while still holding on to NEO.

Onchain developers created the NEOWallet for people seeking an open-source web wallet which does not keep private keys. Just like its former wallets, this web wallet allows for the earning of GAS while still retaining NEO.

Be Wary Of Scams

The City of Zion is a developer who offers numerous NEO wallets. According to them, a wallet feature that stores private keys within its database is a scam and it goes by the name myneowallet(.io).

There have been claims that neopaperwallet is a scam as well. In September there were several accusations on the feature due to the loss of NEO. The allegations are yet to bear substantial evidence, but for a user to be on the safer side, it is best to avoid using it.

For the sake of safety, people should ensure they only use NEO wallets that get directly linked with the NEO developers or the NEO.org website. Abstain from using other forms of purses as it may not be worth the risk.

One of the purest forms of trading NEO is probably via eToro's trading platform for NEO. Do note that when using the platform you cannot withdraw the coins. One can only sell or buy NEO for fiat or in simple terms paper money. People seeking to use eToro do not need to have an NEO wallet. Not all investors will benefit from cryptocurrencies since they fluctuate in prices. The EU does not supervise any trade concerning cryptocurrencies and thus note that your currency is at risk the moment you put it up for business.

Often some people want to buy and retain NEO as opposed to just trading. There are several exchanges where you can do that. NEO purchases can come from either of the following principal trades that include Cryptopia (It can get used via smartphones as well as from an online platform. New users can also enjoy its simple usage and minimal fees), HitBTC (The service has been around for some time now and offers low charges), Binance, Bittrex (The platform gets sought out by many people since it very simple to use), and Bitfinex.

It is always good practice to withdraw your funds once you buy the coins from the exchange. Consider having full ownership of the coins by storing them in a wallet that only leaves you with the access to private keys. The moment the coins sit safely in your purse, the process involved in buying NEO is complete and successful.

Sadly, all over the world, it is not easy to purchase NEO using a credit card at the moment. The most fundamental way of acquiring them is through buying BTC.

Coinbase is among the oldest, top, and most established exchange platforms in which a person can buy Bitcoins. One can buy Ethereum, Litecoin, and Bitcoin using bank transfers or debit cards. The fees charged by Coinbase are low making it a great place for budding traders. The charges are 3.99% when using credit cards and 1.49% when one opts for bank transfers. The moment you get the Bitcoin, then you make an NEO trade. Using the instructions of Changelly which charges only 0.5%; you can use the interface to change NEO from Bitcoin.

Note, however, that the trade is perilous. That said, using a two-factor authorization while keeping the coins in various wallets increases the security of the coins. An NEO investment is at risk once the wallet or account gets compromised. Furthermore, coins in exchange are not secure since not owning your Wallet's key signifies that the tokens do not belong to you per se. Keep in mind that you a sure your security. Consider securing the cryptocurrencies by keeping them in an offline cold storage or hardware wallet.

Benefits Should Outweigh the Risks

There is always a risk involved in the trading of NEO. Though companies like Coinbase and Changelly are popular exchange platform, cryptocurrency trade could lead to a loss of your investment since they are volatile commodities. Delaying sales in the ever-changing market could lead to massive losses.

In the absence of an ID, you can purchase Bitcoins via the peer to peer form of Bitcoin Exchange. LocalBitcoins allows for the buying of Bitcoins using any currency. When you get the Bitcoins, then you can use another exchange to get NEO. Be diligent when selecting LocalBitcoins by making sure you review the rating and profile of the user. There are numerous scam users, and a poorly reviewed pattern is one to stay clear.

Most people recommend Coinbase, but should one unable to use it the CoinMama is another option. One can buy Bitcoins using a credit card from numerous countries. After acquiring them, the next step is converting the coins to NEO in the trading exchange platforms.

Most people new in the diverse universe of cryptocurrencies will find that NEO is quite complicated. It is why most users shy away from the platform. Other factors also come to play that make people steer away from the cryptocurrency.

People have been complaining about the slow reaction the blockchain offers when waiting to synchronize updates. An example of such an instance is when one transfers NEO acquired from an exchange to their wallet. Since it takes longer to get the confirmation of the transactions people do not pay for large values.

Unlike other cryptocurrencies, NEO is indivisible. Other cryptocurrencies like Bitcoins enable them to get divided by up to eight decimal points. It allows for users to be able to buy coins within their budgets even when their value increases. When put in a calculation, a bitcoin that costs 8000 dollars can still get purchased at a divisible rate that sells it at 0.08 dollars for only ten ùBTC pieces.

However, with NEO that is not possible. To acquire an NEO that costs 100 dollars, one has to invest 100 dollars' worth of money. One share is the smallest unit of NEO and is indivisible. Though this seems to be a problem for most users, exchange platforms have ways to divide the coin.

The Trade Drive of NEO

Just like its counterparts, NEO goes with the market flow. Whenever there is a drop in the Bitcoin price, expect a similar outcome in NEO. It happens because traders due to panic rush to sell their assets in an attempt to escape from making losses. Expect up and downs since NEO is also volatile. One of the primary drivers of NEO is the media. When NEO in its former name Altshare got into the Western headlines, there was only a single broker selling it. The incident led to buyers acquiring it and led to the skyrocketing of its price.

The core base for NEO is China; thus any gain or loss influences come mainly from that region. Investors of NEO get highly urged to follow China's development and any government ruling actions. When NEO comes into an all-out partnership with the Chinese government, then the value will go even higher.

Some of the platforms resistant to regulations include Dash and Monero, and Neo is likely to join them. In the case of the two former platforms, users get protected, theoretically of course, since the currencies encourage anonymity. NEO seeks similar protection by emulating openness and are willing to work with authorities. It is the reason the Chinese government attempts to work with NEO. The course of the currencies will hit high notches should the Chinese government adapt to using it as their main block chain solution.

Defining the future of the currency is hard. A short-term target could give rise to unpredictability as opportunists seek to capitalize on the uncertainty of the currency's future. The long run could turn out in either of two ways. Should the Chinese authorities decide on doing a full crackdown on cryptocurrencies then expect a collapse in the value of NEO. A bright outcome, however, is that the Chinese regulators and NEO will join hands in emulating the use of the currency in enterprises. Such a result will lead to the value rising and make the trade worth the risk.