What is Monero (XMR) - Simple Explanation for Beginners

George Shnurenko
Being started in 2014, Monero (abbreviation XMR) is a well-known cryptocurrency of open-source type, which is also privacy-oriented and en-source. 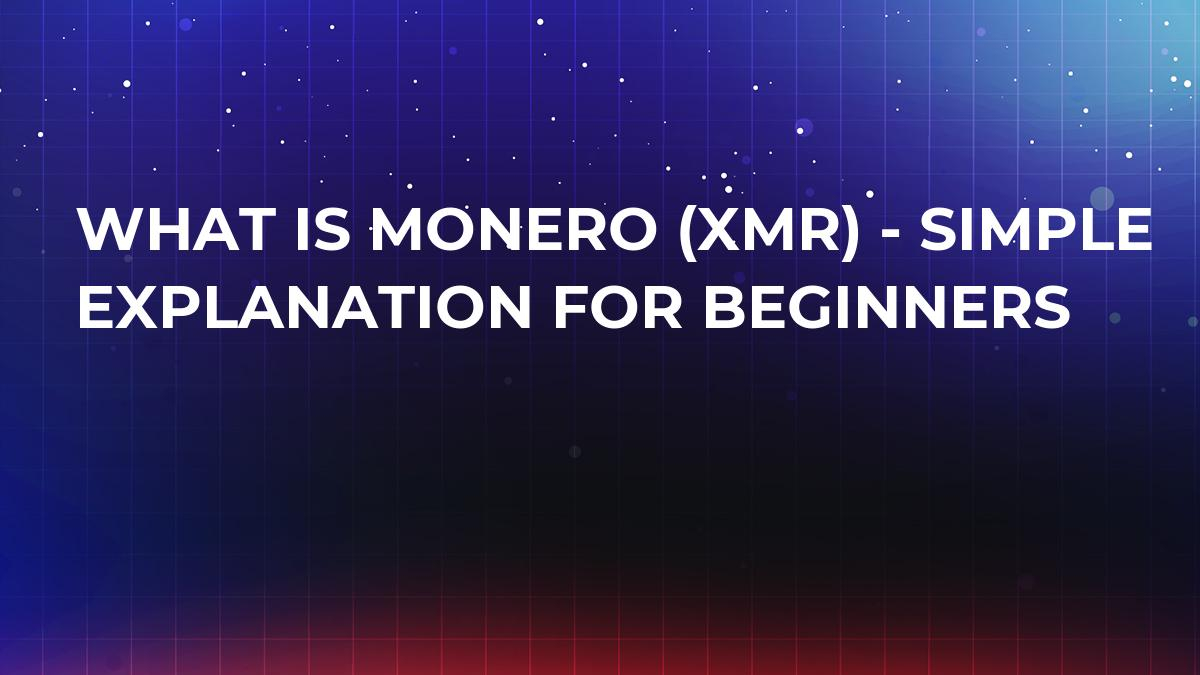 Being started in 2014, Monero (abbreviation XMR) is a well-known cryptocurrency of open-source type, which is also privacy-oriented and en-source. The blockchain concept lies in its foundation. The blockchains mentioned above form the so-called underlying technology on the bases of digital currencies. All in all they are considered to be the public ledgers of all participants' activities, which are able to demonstrate all the transactions, performed in the frames of the network.

To be opaque Monero's blockchain has been intentionally configured. This has made such transaction details as the senders and recipients’ identity and each transaction amount, anonymous. The successful result was achieved thanks to the introduction of the hidden participants’ addresses.

Together with anonymity, the general process of Monero mining lies on a so-called egalitarian concept, which is the principle in accordance with which all men and women are equal and that is why they deserve equal opportunities. The moment Monero was launched, its developers did not get any stake for themselves, as they banked on contributions and community support, required for successful further development of this virtual currency.

Nowadays Monero supports a peculiar mining process in which all individuals get rewarded for the performed activities through joining mining pools. Moreover, there is a possibility to mine Moneros individually. The good thing is that Monero mining can be done with the help of a standard computer. The users do not need any particular hardware usually represented by ASICs (application-specific integrated circuits).

Up to the present moment, Monero can be run on all existing leading OS platforms. The main ones are Windows, Linux, MacOS, Android and FreeBSD.
card

Monero eases privacy of all the matters concerning the using available concepts related to the ring signatures as well as stealth addresses.

Ring signatures make it possible to identify the participant from others in a group. In their turn, they are represented by anonymous digital signatures, which are given by one member of the group. However, we should admit that the last ones don’t show which member exactly has signed the required transaction.

In order to generate a ring signature, this platform is equipped with a special combination of a sender’s account keys. In addition, we can’t but mention that it is joined with the so-called keys on the blockchain. It makes the service unique and private at the same time. This introduces the opportunity to hide the sender’s identity. Why? – The matter is that from the technological point of view, it is impossible to define which group members' keys exactly were used to do the complex signature.

Stealth addresses are able to add some additional privacy, as they are represented by randomly generated addresses, which are suitable only for one-time use and are created for each transaction on the recipient’s behalf. Their using makes it possible to hide the transaction actual destination address, and it conceals the receiving participant’s identity.

In addition, we should mention that RingCT (or Ring Confidential Transactions) makes it possible to hide the transaction amount. After the official introduction of the RingCT in January 2017, this functionality became obligatory for all transactions executed on the base of Monero network.
card

Why are Monero and Bitcoin Different?

Being the most famous cryptocurrency in the world Bitcoin uses a protocol, which enables to shield the identity of the participant by using the addresses with a pseudo name, which is represented by randomly generated combinations consisting of both letters and numbers.

However, in accordance with the specialists’ points of view, this kind of approach provides restricted privacy. Why? – The matter is that the Bitcoin addresses as well as the transactions, which are registered on the blockchain, open them to public without any difficulties. Under these conditions, even the pseudonymous addresses cannot be fully private. You see, if the participant carries on a few transactions, a time span is connected to the same address. This situation allows public, as well as government, family and friends to find out the address owner's trends, and as a result his/her identity.

The one more important advantage of Monero as compared to Bitcoin is its fungible ability, which means that in the case of necessity, two currency units can be substituted mutually and there is no any difference between them. In the case when two $1 bills are equal in value, they are not fungible, because each of them carries a peculiar serial number. However, two pieces of gold of 1 oz. of the same grade are thought to be fungible, because they both have the same value, and don’t obtain any distinguishing characteristics. With the help of this analogy, we should remind that a Bitcoin is something like the $1 bill, while a Monero is taken as the gold piece.

The each Bitcoin transaction history is usually recorded on the blockchain. It makes it possible to identify Bitcoin units that may be linked to definite events, like, for example, fraud, or gambling, or theft. All these things can be used as a cause for account blocking, suspending or even closing. Imagine the situation: you are receiving some bitcoins today and they were previously involved in gambling. As a result, they will be banned in the course of time and you will have a loss.

Monero has got a so-called non-traceable transaction history. It means that this service offers participants a network, which is much safer. In it, you don’t have any risk to purchase the refused or blacklisted units.
card

Of course, these privacy pluses have guaranteed quick Monero adoption. However, they have also met some challenges. The common Monero features of non-traceability and privacy allow this service to be used for different purposes and even at questionable marketplaces, including, for example, drugs and gambling ones. Up to the present moment, such markets like AlphaBay and Oasis, arranged on the dark web, have already seen its increased use.

Some recent reports, published by CNBC, inform about numerous hackers, who create the malicious software that is able to infect the hardware and as a result computers will mine the cryptocurrency and send it somewhere to North Korea, for example. The essential thing we should mention is that Monero is considered to be open for various activities and remains at the same time outside of any capital controls.