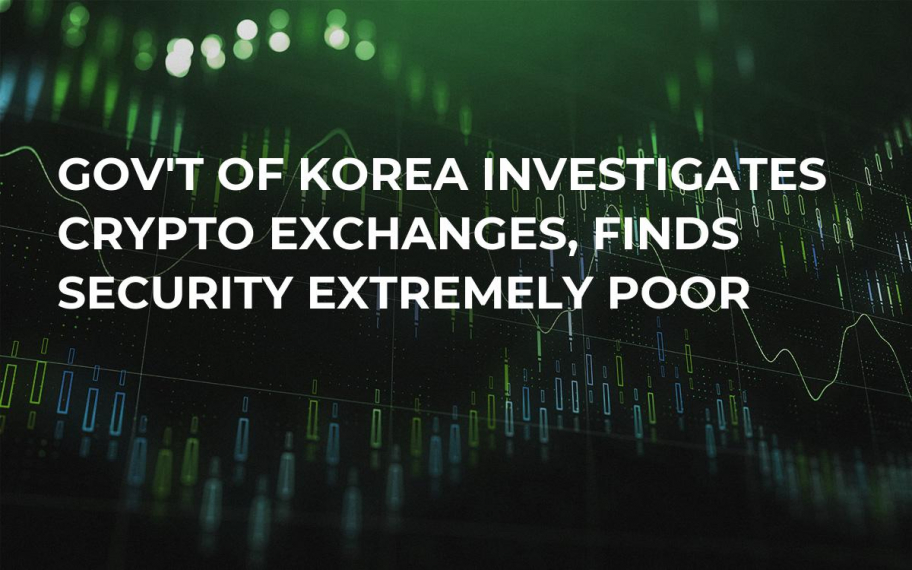 Korea Internet & Security Agency, a sub-organization of the country’s Ministry of Science and IT, has discovered in its investigation that local crypto exchanges have extremely poor security measures and internal management systems.

The investigation was conducted by the government of South Korea in an ongoing initiative to evaluate the cryptocurrency market prior to the imposition of the first cryptocurrency and Blockchain legislation.

Over the past month, security experts and financial authorities at the South Korea Ministry of Science and IT investigated 21 digital asset exchanges operating in the local market with newly obtained licenses.

The authorities analyzed exchanges based on a criteria of 17 categories and conducted comprehensive analysis of all of the exchanges in the country, including major trading platforms like UPbit, Bithumb and Gopax.

In 11 out of the 17 categories, the government found that the vast majority cryptocurrency exchanges showed extremely poor security measures and failed to comply with existing policies established for regulated financial institutions.

Since the newly drafted cryptocurrency and Blockchain legislation by South Korean lawmakers will soon consider cryptocurrency trading platforms as regulated financial institutions, local authorities demanded exchanges to overhaul their systems as soon as possible, preferably by the end of August.

Security experts at KISA and the Ministry of Science and IT told local publications that UPbit, Bithumb, Korbit, Coinnest, Coinlink, Coinone, Coinplug and Huobi had decent security and internal management systems.

Retail traders and individual investors in the local cryptocurrency exchange market expressed their optimism towards the efforts of the government to actively collaborate with digital asset trading platforms to improve their systems and protect investors.

Throughout the past three years, the government of South Korea was heavily criticized for its reluctance in regulating the cryptocurrency market due to its concerns that investors would start to recognize the market as a legitimate industry.

Last month, the government emphasized that it will evolve the cryptocurrency and Blockchain sector into legitimate industries with strict regulations, and allow cryptocurrency trading platforms to operate as regulated financial institutions.

Some regional governments including Jeju Island and Busan, the second biggest city in the country, have vowed to create the next “Crypto Valley,” by imposing favorable regulatory frameworks for crypto and Blockchain startups.

The efforts of the government to extensively evaluate and analyze the internal systems of cryptocurrency exchanges is seen by analysts as the first step towards regulating the local crypto market and ensuring that investors in the public market can have confidence investing in crypto in the long-term.

So far, local authorities have said that digital asset trading platforms need to allocate most of their resources in overhauling their systems to ensure their platforms remain on par with banks and other major financial institutions operating within South Korea.