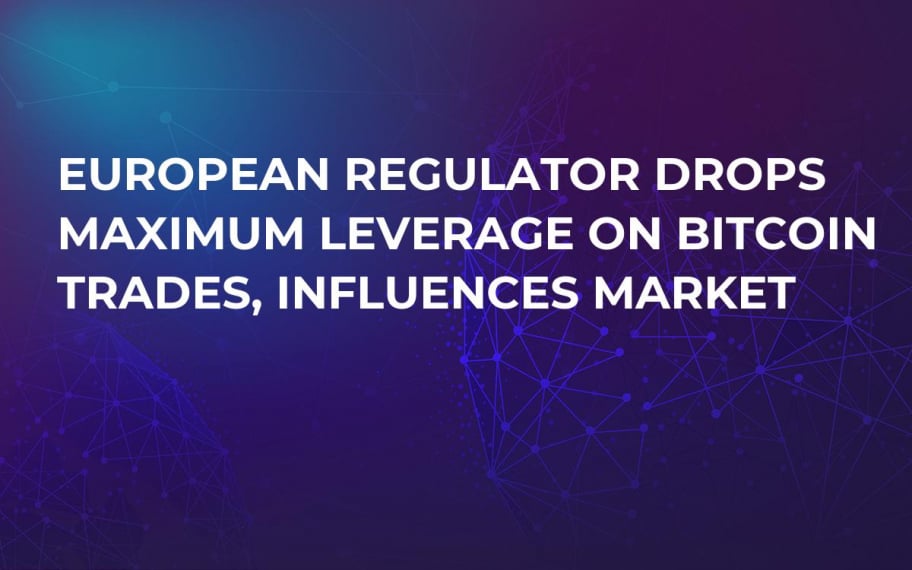 The European Securities and Market Authority (ESMA) has reduced the maximum leverage that can be used on Bitcoin trades, according to the South China Morning Post. The new rules have dropped the maximum amount of allowable leverage from 15x to 2x, considerably lessening traders’ potential profits (and losses). The change only applies to certain kinds of derivatives purchased through brokers called contracts for difference (CFD). It does not apply to margin trading on cryptocurrency exchanges.

Leverage is the act of borrowing money in order to increase the size of one’s trades, thus increasing the potential profits and losses. Using leverage to trade is called margin trading, and traders can either take a short position (betting that the asset will drop in price) or a long position (betting the price will go up). Somebody who has $100,000 can actually margin trade on 5x leverage to open a position worth $600,000 (their $100,000 plus $500,000 in borrowed money).

Extrapolating some, that means that on 15x leverage, if the price of an asset drops by just over 6%, the trader would be completely wiped out. All his money would be gone. Once the value of the trader’s position drops below his minimum margin level, the exchange will forcibly close his position, a process called liquidation. Such a trader doesn’t have the option to wait and see if the price moves in his direction again; his position is closed so that the exchange doesn’t lose any of the money it loaned him.

Massive amounts of leverage are regularly used in markets like foreign exchange (FOREX), where traders bet on the value of other currencies rising or falling. Since the value of national currencies typically only rises or falls by very small percentages, massive leverage is necessary to make any profit in the market. This is quite common in less volatile markets, and is considered relatively safe.

What really scares regulators like ESMA is the volatility of Bitcoin. Using 15x leverage to trade FOREX would not be crazy at all, since prices aren’t likely to move more than a fraction of a percent. However, a wildly volatile asset like Bitcoin can experience 20% or more moves in a single day. Such volatility would very quickly wipe out a trader who bet incorrectly on high leverage.

ESMA has determined that given Bitcoin’s notorious volatility, the maximum safe amount of leverage to use is 2x. This certainly keeps traders from being wiped out if the price moves against them rapidly, but it also limits their potential profits. Not only that, but it limits the influence of their trades on the Bitcoin market as well. Somebody buying at 15x leverage generates a lot more demand, and thus pushes the price higher, than somebody buying at 2x leverage. It’s believed that such changes could dampen the price growth of Bitcoin during upward trending markets, since margin buyers can suddenly buy far less than they otherwise would.