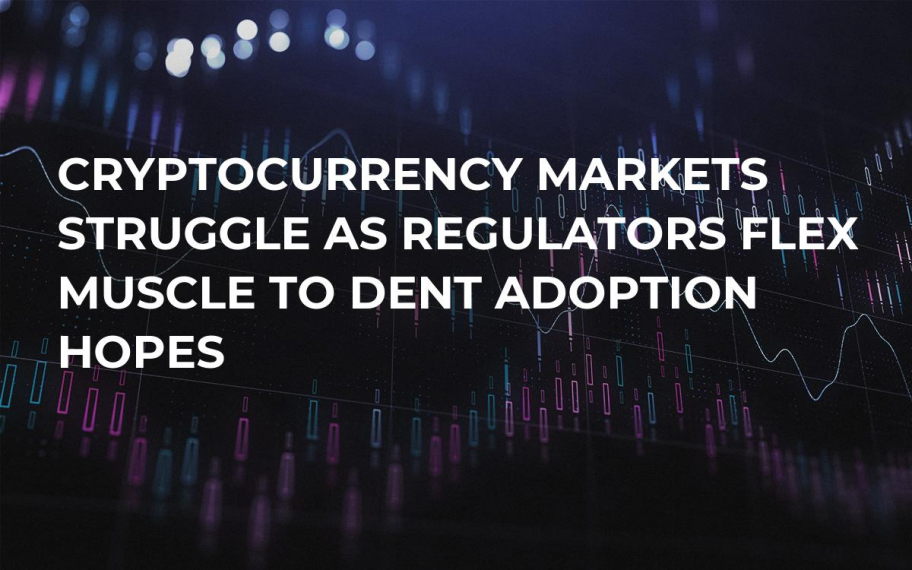 Following the sudden and sharp fall earlier last week, the cryptocurrency market has struggled to claw back any gains, rather falling slowly and steadily. The fall saw the major cryptocurrency Bitcoin go from almost $7,400 down to a low of $6,200 on Saturday.

It has since managed to climb up $150 or so, but the overall sentiment is not positive. The fall has been blamed on a multitude of things, from Goldman Sachs- now disproven- to a massive move from the ‘Tokyo Whale’ of Mt. Gox, but really, it seems that the reason is nothing new- regulatory pressure.

There has been more evidence of regulators becoming worried and suspicious of cryptocurrency as the US Securities and Exchange Commission temporarily suspended trading in two exchange-traded notes linked to cryptocurrencies.

But overall, this regulatory suspicion and concern is really pointing to a bigger trend that has also been pointed out by Ethereum’s founder, Vitalik Buterin. The influential crypto commentators have said the days of explosive growth in the Blockchain industry have likely come and gone.

It is not only Bitcoin which has been in decline, in fact, Ethereum has been struggling badly hovering under $200, but most of the top 10 coins are showing a general pattern of decline, despite some small and short spikes seen over the past few days.

There are some bigger coins showing a bit of fight, such as Dash and IOTA, the former is on an upward trend is up 12 percent over 24 hours, and IOTA is up seven percent.

Even when the fall in the markets was being pinned to an institutional bank in Goldman, it was questionable as to why these traditional institutions held so much power and sway over a decentralized entity such as the cryptocurrency market.

Cryptocurrencies had free reign to run wild not too long ago, and without pressure, the adoption and excitement went through the roof and the adoption was huge. However, now that they have caught up, and it seems that regulators are trying to bring things down to their pace, adoption has slowed severely.

Buterin’s assertion that the hype and days of big growth are over seem to be spot on. It has been a long time since the 1,000s of percentage growth has been seen in the major cryptocurrencies and with the space being sorted and found out, there is no reason it will happen again.

Adoption is a major part of the growth of the price of a coin, and while it is not in decline, it is neither in hyperdrive. The cryptocurrency mass adoption looked like it was a few years away in December last year, but that timeframe has probably been pushed out a few decades now.