Cardano Price Prediction [UPDATE]: Reasons Why 2019 Will Be Good for Cardano

Jack Thomas
Cardano has been touted as the Ethereum killer and is starting to prove it has what it takes, meaning 2019 could be a good year for it 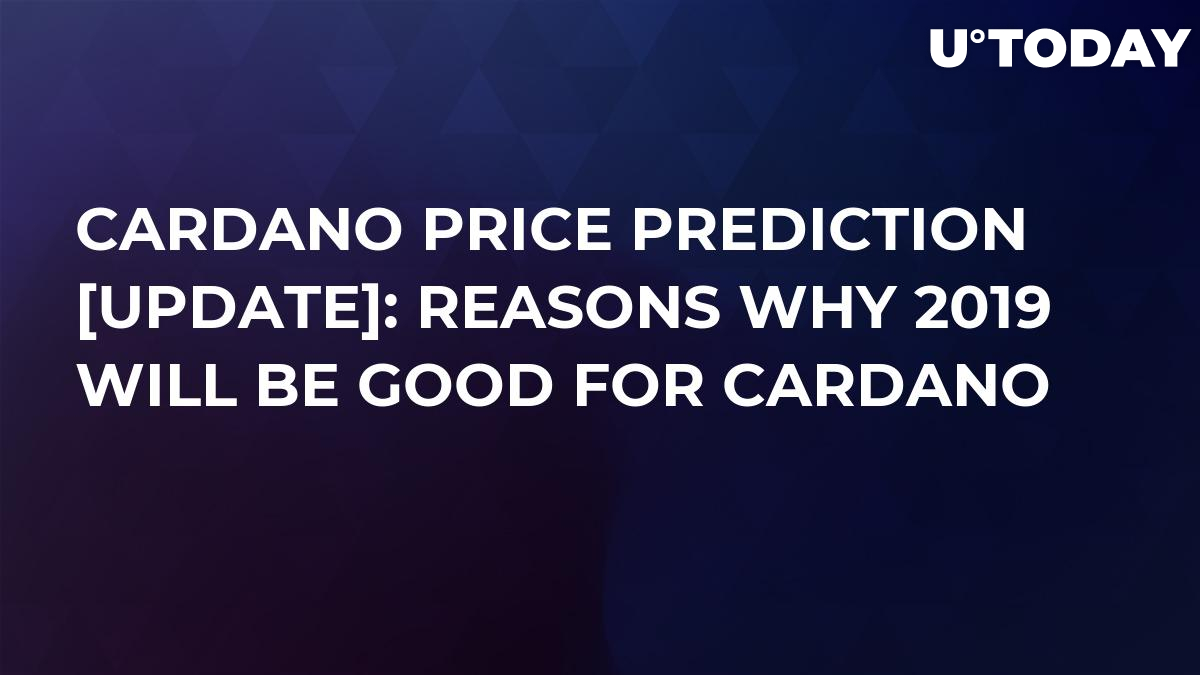 Cardano has shown that it is a real contender in terms of competitive cryptocurrencies and is only gaining in its growth and potential. Does that mean 2019 will be the year that Cardano’s price explodes and overtakes Ethereum?

Cardano was born in part from former Ethereum co-founder Charles Hoskinson and was created in order to take smart contracting on the blockchain further. Cardano has openly expressed that it wants to overtake and ‘kill’ Ethereum.

With Ethereum also having a rather bad 2018, slumping in its own growth and adoption, there has come a perfect time for Cardano to launch its attack and potentially push to dethrone Ethereum.

If this was to be the case, with the positives that are happening around Cardano, there would no doubt be a boost in its price, and the price prediction surrounding the coin would need updating for 2019.

Like many other coins, Cardano reached new heights back in January of 2018 where it topped at being valued at over $1. However, its price today has fallen far, dropping down to as low as $0.04.

That being said, many coins are taking this time to consolidate and build their project rather than the hype and speculation around them. They are thus starting from the ground up, beginning with their algorithms.

They have developed three algorithms with modifications called Ouroboros, Ouroboros Praos, and the latest being Ouroboros Genesis.

Ouroboros is the first ever mathematical protocol that has proven to be secure and also the first ever to have gone through a peer review in its acceptance to crypto last year.

Furthermore, Cardano has even shifted its base of operation to the much more crypto-friendly state of Wyoming. The governor there has expressed his admiration of blockchain, and the state has recently put forward some promising bills on blockchain and cryptocurrency classification.

Cardano is also moving its scope and range as it looks to use its technology to help development in Africa. Cardano wants to set up a digital blockchain property register which can identify land using GPS coordinates. Accordingly, the property owner can be verified and the ownership can be transferred at a very minimal cost.

Rwanda has come to accept blockchain technology and digital transformation. They are planning to fix its ledger onto a blockchain system.

It is difficult to see where Cardano’s price will head, especially noting its drop in just over 12 months; however, there is a lot of promise and potential around the blockchain. If they are able to continue growing sustainably and with a solid base, there is a strong chance they could become preferred over Ethereum in certain regards.

If Ethereum does not start stepping up its own game with the likes of its move to a proof-of-stake protocol, something Cardano already has, then there will be a big gap in the market for one of Ethereum’s rivals to step in.