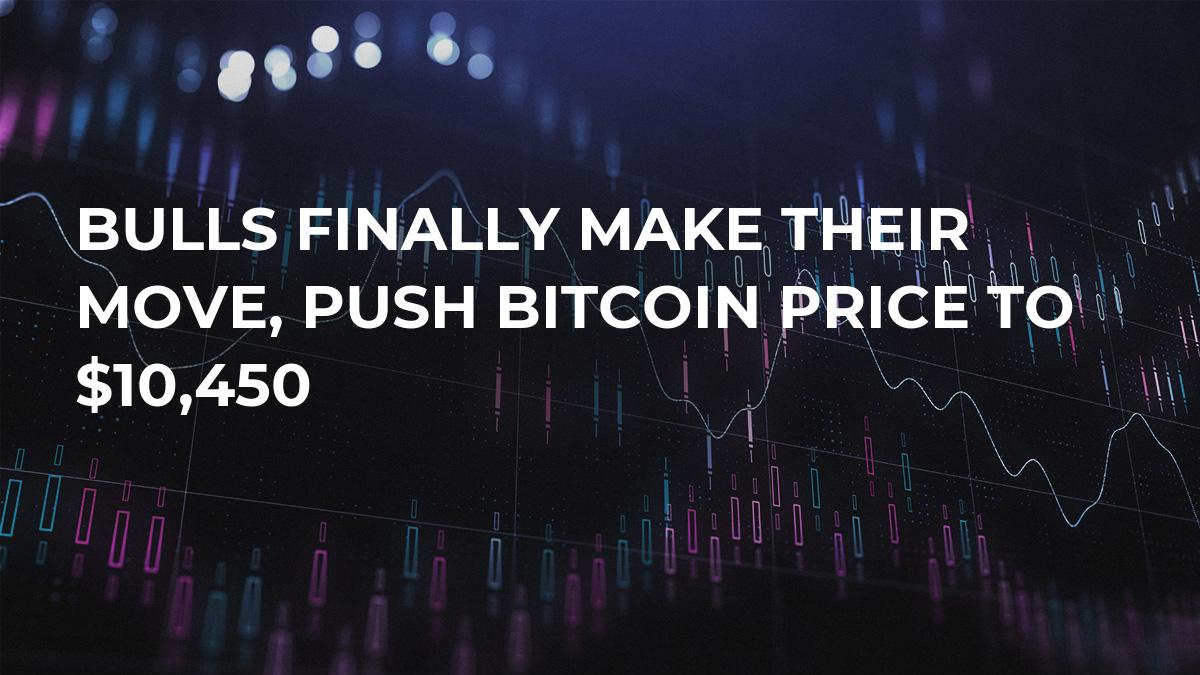 Yesterday, the bulls finally showed themselves and took the step everyone waited for, pushing the market up. Having broken through the wedge that we described yesterday, buyers were able to raise the price by 10 percent to $10,450. The signal was given, and altcoins that have been patiently waiting for their moment followed the underlying asset in growth. On the other hand, coins that already showed growth during BTC consolidation have slightly fallen back. Total market capitalization by the beginning of Tuesday is $445 bln, $10 bln more than the previous day. Bitcoin dominance also grew, and now makes up 39 percent.

Among the altcoins that grew in price, NEO is the leader, having grown by 15 percent yesterday. The catalyst for this growth, it seems, is the impending airdrop of ONT (Ontology) tokens for NEO holders, in the ratio of 0.2 ONT to one NEO. Ontology is a new Blockchain in the field of digital identity. The price of the Ontology token is not yet known, but it’s doubtful that owners of the “Chinese Ethereum” will get rich from this campaign. Rather, it can be seen as a successful media ploy to awaken a sleeping dragon.

Altcoins in the top 10 showed movement in varied directions. Bitcoin Cash holds the honorable third place with a price of $1,250 and five percent growth. It’s a weak consolation for investors, considering that a week ago the price was $1,550. However, we wrote about the dangers of investing in BCH back on Feb. 9. Dash is desperately trying to get to 10th place with a growth of 3.5 percent. Of the coins fallen behind, we’ll single out Litecoin which lost six percent from yesterday’s price and is now resting at $215. After the recent LTC surge, this is to be expected.

On breaking through the bullish wedge, we saw sufficient trading volumes that allowed the price to gain a foothold beyond the psychologically significant $10,000 mark without considerable setbacks. Growth slowed near the resistance at $10,500 and now Bitcoin is forming a new figure- a bullish flag with lateral movement in the $10,100-$10,400 zone.

If the flag is activated, the target is clear: it’s the boundary of the descending channel, which could not be broken before. Near the boundary, there is strong mirror level of $10,850, that had stopped the price a few times previously. Very likely, the breakthrough will happen, but it may take several days to gather the required strength. We also do not rule out that in the course of the lateral movement a testing of lower levels like $10,000 and $9,850, 0.382 and 0.5 Fibonacci retracements respectively, is possible.

NEO is also drawing a bullish flag, and at the time of writing it seems to be activating. If the price covers the full distance, it may reach the $150 target which coincides with the upper boundary of the ascending channel. We discussed this target quite a few times before. Yesterday, buyers supported the asset with significant trading volumes, but it remains to be seen if they can do the same today. The airdrop, discussed above, will take place on March 1, and as we saw with Litecoin, demand can decline a couple of days before the event.

If buyers can’t defend the price, NEO could correct to $125. Let us point out that, according to the volume profile data, fair price for the asset from the beginning of January 2018 is around $115, which is lower than current values. This doesn’t mean that a fallback is inevitable, rather, it’s a caution against very active purchases.

Shortly after the correction of Feb. 5-6, Bitcoin Cash price was constrained within a fairly narrow side corridor and we don’t see any signs of a breakthrough yet. From the moment of SegWit implementation by Bitcoin Cash’s older brother, the interest toward BCH as a payment mechanism has lowered significantly, which resulted in a correction to $1,130.

However, revitalization in the market has spurred the price slightly and we see another one bullish flag forming. The activation of this pattern will lead to $1,350-$1,400, where BCH will face a mirror resistance and the 0.618 Fibonacci level. Meanwhile, Bitcoin Cash has not formed a clear rising trend, so trading this asset can turn out to be unpredictable and disappointing.