Masha Beetroot
Antivirus Pioneer and “Chief Cybersecurity Visionary” John McAfee explains why Bitcoin will be worth $1 mln by 2020 and why every company in the future will have to have its own token. 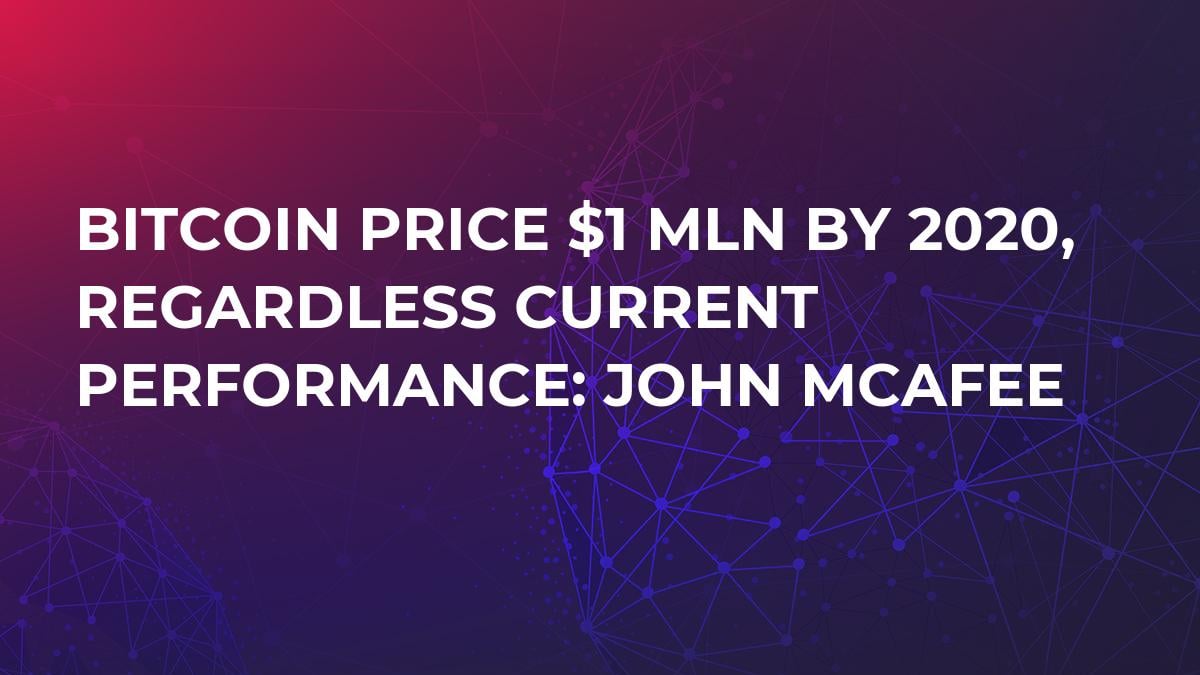 Antivirus Pioneer and “Chief Cybersecurity Visionary” John McAfee explains why Bitcoin will be worth $1 mln by 2020 and why every company in the future will have to have its own token.

CryptoComes: How did you first learn about Bitcoin and what was your initial reaction?

John McAfee: I was introduced to Bitcoin by friends of mine who insisted that I understand it. At first, it made no sense to me, but then I read Satoshi’s white paper. As a mathematician, I thought it was beautiful. I saw that this is something for the future, that it will change the world.

I didn’t get intimately involved until three years ago when I started mining Bitcoin with my company, MGT. We are now one of the largest miners in the world, with 6,000 supercomputers and [we’re] getting another 6,000 very soon. It’s not exciting or interesting, but it generates a lot of money which I can use for the projects I am interested in.

CC: If you were Satoshi Nakamoto, how would you use your Bitcoins?

JMA: Well, I’m not Satoshi, so I do not know. Here’s what we do: as soon as we mine them, we simply sell them and buy more machines [to] mine more Bitcoins. It’s the best economic model.

CC: Who would you say are the greatest enemies of Bitcoin?

Most governments tax income, or goods and services. If you use a private cryptocurrency like Monero, there’s simply no way to track how much money you’ve made or spent [and] no way to track any transaction to its source or its destination.

That terrifies governments because you are now counting on people to be honest about what they are earning and what they are doing with that money. That’s unrealistic. We are people, we have our faults and we like our privacy.

“They will simply be ignored”

CC: Many experts in the crypto community think that regulation of Bitcoin will hurt it, at least in the short term. What is your opinion?

JMA: First of all, if you create legislation or laws prohibiting something, you must have the ability to enforce those laws. How can you enforce the use of Bitcoin? You would have to have one enforcer for every citizen of the country and that’s impossible.

Let’s take an obvious absurd law as an example. In America, smoking marijuana is illegal in almost every state. And yet, I don’t know anybody who does not do it. Why? It cannot be enforced.

It’s much harder to enforce the use of Bitcoin or Monero or Ethereum than it is to enforce [laws against] smoking marijuana. It’s absurd to think that governments will pass laws that mean anything. They will simply be ignored.

CC: What about your expectations? Do you still think that by 2020 Bitcoin will be worth a million dollars?

JMA: Absolutely. We all know that within 15 or 20 years [nearly] all the Bitcoins will be mined. There are 10,000 mining companies working for a year and a half, paying millions of dollars in electricity alone, trying to get to the last Bitcoin.

Imagine what this last coin is going to be worth: trillions. Toward the end, we will all have to work together to form a global mining pool, so that no matter who mines it, we all get our percentage.

All you have to do is work backwards and you see that in 2020 it has to be a million dollars, or 10 million. I’m a mathematician: one plus one is two, two plus two is four — it’s simply the truth.

“Every company will have to have its own token”

JMA: The number of ICOs is doubling every two months. In just two weeks almost 1,000 new ICOs have been submitted to me and my team for evaluation. Think about this: in six months there’ll be 5,000, in a year there’ll be 10,000.

So absolutely there’s a future, because everything in life, ultimately, will be on the Blockchain. [It will influence] our religious preferences, the way we drive cars, the way we live at home, the way we entertain  and educate ourselves. Every company will have to have its own token. It’s like when we started the Internet, and people thought it was nonsense, no big deal.

Companies ignored it, but try to find a single company today that doesn’t have a webpage. If you don’t have one, you’ll be out of business. So, in 5 or 10 years every company will have to have its own currency, or else be irrelevant and simply disappear.

My staff and I review 200 new ICOs every week and 90% of all the ICOs are scams. You can’t tell which is a scam unless you dig into it like my team does.

If I find something interesting, something real and helpful, I try to make sure the world knows about it. Without public knowledge, the chance of that coin or that token surviving is very slim.

CC: Do you think there is conflict of interest when ICO advisers are paid huge sums of money? Perhaps the institution outlived its time and needs to be replaced by a Blockchain-based model?

JMA: If you watch television, every celebrity in the world is promoting something - an automobile, an insurance company. Why? Because when a celebrity comes out and says “I drink this coffee,” whether they do or not, we all want to drink that coffee.

The crypto community has its own celebrities, so of course they are going to become advisers and make money. They are not going to do it for free.

There’s no difference between what’s happening here and what’s been happening in any industry since the beginning of marketing and advertising.