3 Problems Stopping Crypto From Mass Adoption, and One Solution That Solves Them All 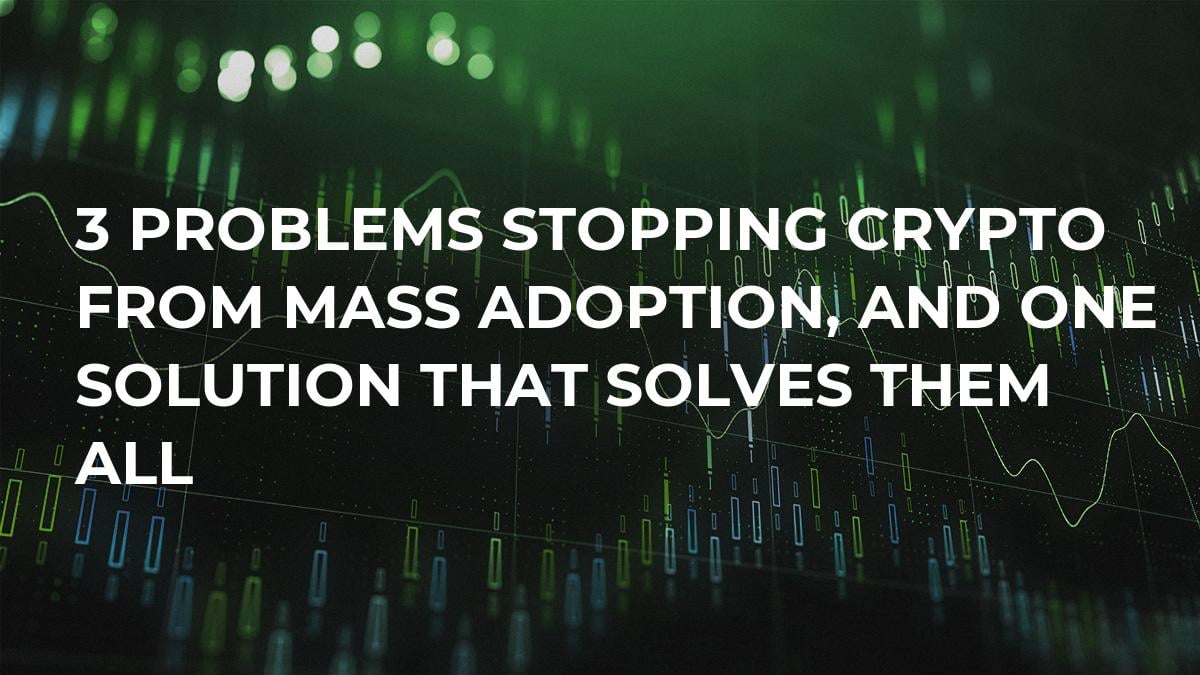 According to the World Economic Forum, 10 percent of the World’s GDP will be on the Blockchain by 2027.

Blockchain technology will also power all of the EU’s public services. This may happen after 2027, but according to the EU’s Commisioner for Digital Economy and Society, it is inevitable.

Meanwhile, ICOs are becoming a key way to find financing. In 2017, IPOs raised an aggregate $35 bln; the respective figure for ICOs was $5.6 bln.

This is a huge deal, given that this was the first major year for ICOs, ever- and an up year for IPOs. Given that this year’s ICOs have already made more than $6 bln, they may soon rival IPOs in total size.

The Blockchain is a big deal, and it’s only becoming more important. At the same time, there several major problems limiting the real-life usage of Blockchain technology. The challenges are so drastic that Vitalik Buterin has gone on record to say:

"If you want to build a decentralized Uber and Lyft on top of an unscalable Ethereum, you are screwed. Full stop."

This begs a simple question. Why is the current generation of Blockchain protocols, including Ether, unworkable in their current state? And how can the crypto space get past the “experimental tech” phase and become a mass-adoption-ready tech?

In this article, we’ll give you the answers by highlighting the three key problems with crypto and explaining how a new meta-protocol helps solve them.

Ether is one of the best, most advanced Blockchains out - but it was slowed down by a single online game called CryptoKitties circa December 2017.

Vitalik’s words about scalability are no exaggeration.

The main problem is the very nature of Blockchain technology. We’ll explain why Blockchains are inherently poor at scaling in another article.

For now, what matters is that traditional Blockchains based on Proof of Work get slow over time and nobody’s quite sure how to solve this problem. Adding more mining and non-mining nodes doesn’t change a Blockchain’s transaction capacity. Neither does increasing the mining power of an individual node.

Indeed, the single best way to improve scalability is to step away from traditional Blockchain structures.

To this end, Kirik is a useful tool for two reasons. First, KIRIK uses IOTA’s Tangle. These tangles are similar but not identical to classical Blockchains, with the main difference being that they scale well and work much faster as the amount of transactions goes up.

Second, and this is important, Kirik is a meta-protocol that connects Blockchains (and other databases and asset types) with each other. Using its features, all kinds of other Blockchains and protocols can scale better by taking advantage of tangles- even if they don’t inherently use tangles themselves.

The second major problem is…

Developers can code apps “on top of” Bitcoin, Ether and other Blockchains. However, the standard is for Blockchains to use algorithms, i.e. long-form step-by-step instructions. This is a complicated way to code; for example, an ICO Smart Contract on the Ether Blockchain is 370+ lines long:

This kind of algorithmic programming is time-intensive. It’s like telling a computer what to do step by step- “turn on, start the hard drive, switch the monitor on, set brightness to 80 percent”- rather than relying on A.I. to deliver an intuitive experience.

Kirik helps solve this by creating a logic-based way to write Blockchain protocols and apps. Instead of writing out step-by-step algorithms, developers create smart contracts and assets with simple IF-THEN logic and let A.I. do the heavy lifting.

To illustrate the difference, here’s the same 400 lines of code from above expressed in Kirik’s logical functions:

The difference is clear. Going from 400 lines of code to two short formulas represents an exponential difference in size. Kirik does require developers to set rules to govern formulas like the ones above - but that only adds a few more lines of code.

Moreover, Kirik’s use of regular logic makes smart contracts clear to users and clients. This makes programming easier and improves scalability. No matter how you slice it, a few lines of logic-based code are superior to long-form algorithms.

All of this is important in and of itself, but also for solving problem #3.

Today, all Blockchains stand on their own. Many believe that connecting them is a prerequisite for mass adoption. After all, while all of them are disconnected from each other as well as traditional networks in banking, ERP, CRM, etc, they can’t be used for much and here’s why.

First of all, disconnected Blockchains mean that crypto assets are fragmented and disconnected. This decreases their value and adds unnecessary steps, risks, and costs to asset transference (e.g. via crypto exchanges).

The second problem is that separate networks make decentralized apps and crypto protocols inconvenient to use. Separate Blockchains like the Internet before 1993; they’re interesting, they can be useful, but they’re just not mass-adoption ready. For that to happen, Blockchains need to form a real network that’s connected via a single technology - namely a meta-protocol.

To this end, Kirik is to crypto what TCP/IP was to the Internet. It lets developers connect Blockchain networks via a straightforward protocol, paving the way for the unification of all Blockchains.

To this end, Kirik is an important tool because, like TCP/IP,  it lets developers connect Blockchains. With Kirik, users won’t have to so much as think about the fact they’re using different Blockchains; they will have a seamless, end-to-end experience.

And as far as developers, consumers and institutions go, a single, unified, World-Wide-Web style Blockchain space will be infinitely more useful than what we have today.

Now you know the three biggest problems in the Blockchain industry and how the Kirik meta-protocol can solve them all.

To learn more about the project, and the 20+ years of research that preceded the tech itself, check out this website, whitelist and the Telegram group. You’ll see how KIRIK can enable and facilitate: