Why National Cryptocurrencies Like Venezuelan Petro are Doomed to Fail 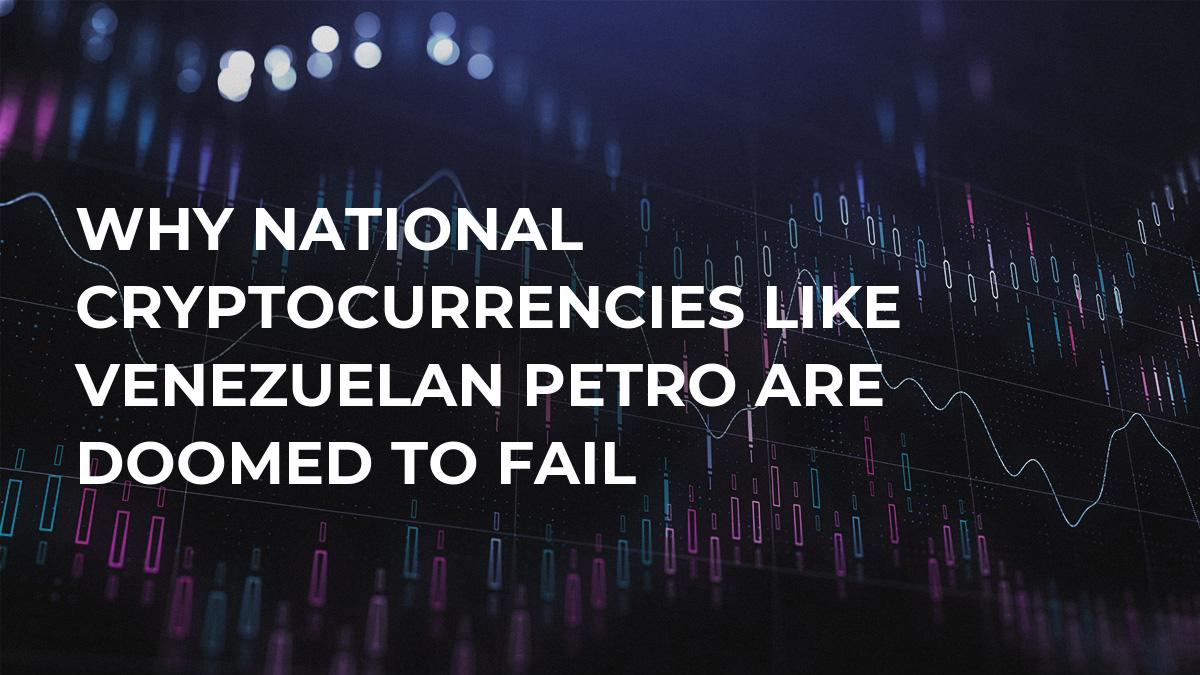 On February 25, Ari Paul, the chief information officer of BlockTower Capital, a cryptocurrency hedge fund founded by a former Goldman Sachs vice president, stated that a small portion of the global cryptocurrency market is still not aware of the fundamental and structural difference between government-issued cryptocurrencies like the Venezuelan Petro, and public blockchain networks like bitcoin and Ethereum.

“Venezuela, Iran, Russia, and China are the countries that indicated they're planning on launching crypto fiat soon. I fear the rise of a narrative not of crypto being used by drug dealers, but by totalitarians. You and I know crypto fiat [is not equivalent to] public crypto, but not everyone gets that,” said Paul.

“Sure, US dollar hegemony will collapse within the decade I think. But crypto fiat is an Orwellian nightmare in the hands of any state, especially the more totalitarian ones.”

Cryptocurrencies based on public blockchain networks like bitcoin and Ethereum are secure, decentralized, and robust due to their computing power, open-source development communities, and centralized entities. None of the leading public blockchain networks in the market have a single point of failure, which hackers can target to bring down the distributed network and attack the cryptocurrency.

Last week, multi-signature blockchain security company BitGo lead engineer Jameson Lopp noted that while centralized financial systems provided by banks and financial institutions closed down during the holidays, bitcoin processed more than $1 billion on a single day, and over $7 billion worth of bitcoin was traded.

The Bitcoin network has been functional for

If a centralized entity has full control over a cryptocurrency, it has the authority and the capability of altering its monetary supply, manipulating its transaction flow, and revoking payments settled on a ledger, unless the blockchain network is made public and operated by a transparent community of developers.

For instance, in the cryptocurrency market, there exists many blockchain projects developed and managed by companies, like Ripple, Zcash, Cardano, and EOS that are valued at many billions of dollars. But, the development of these projects are transparently shared on code repositories like GitHub, and anyone can contribute to their codebases. A commercial company can lead the development of the blockchain project, but it has no control over its activities, like transaction settlement and monetary supply.

The Venezuelan Petro’s initial coin offering (ICO) or token sale raised more than $1 billion in a short period of time. But, Matt Levine of Bloomberg emphasized that the Venezuelan Petro’s success is not expected to help the country deal with its massive debt. More importantly, there still exists confusion on the legitimacy of the country’s oil reserves and in what way Petro is pegged to the reserves.

“The Bolivarian Republic of Venezuela guarantees that it will accept Petro’s as a form of payment of national taxes, fees, contributions and public services, taking as a reference the price of the barrel of the Venezuelan basket of the previous day with a percentage discount of Dv,” read the original whitepaper of Petro, which failed to even mention that Petro represents ownership of the country’s oil reserves.

The intended obfuscation of its token sale and the entire structure of Petro by the Venezuelan government demonstrate a poor future for the cryptocurrency, especially considering that investors still do not know if the Venezuelan Petro is an ERC 20 token on Ethereum or a blockchain of its own.