Katya Michaels
In his exclusive interview, Jeff McDonald explains how NEM is going to get ahead of Ethereum 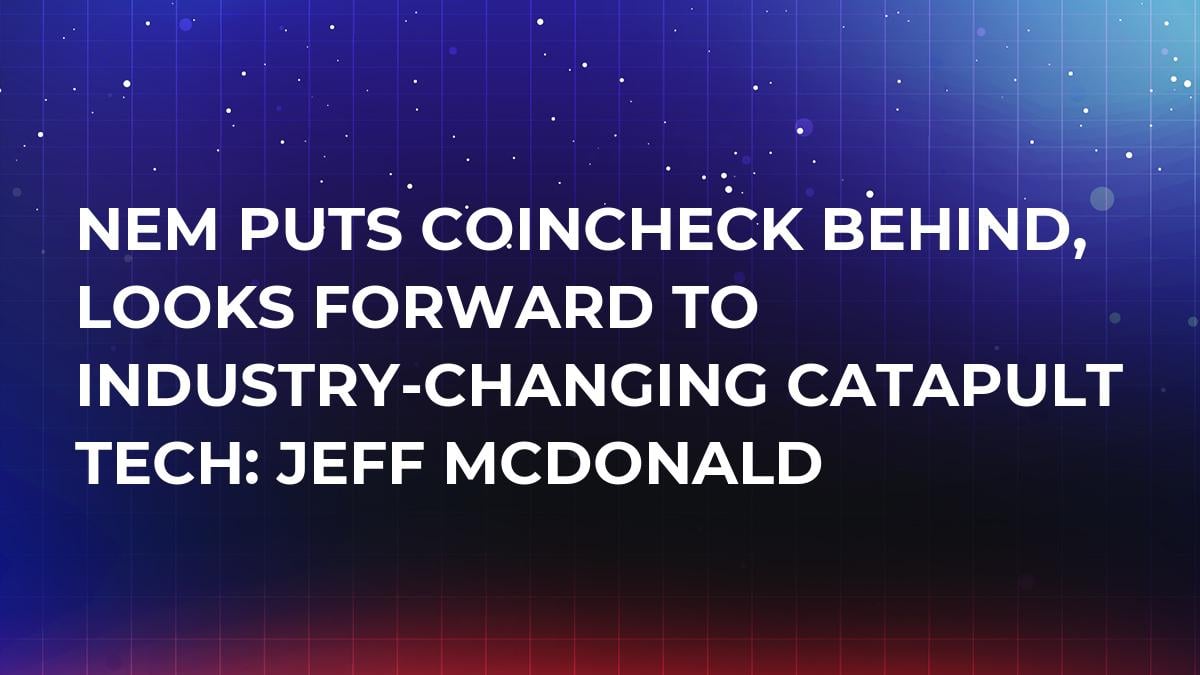 CryptoComes talks to NEM’s Jeff McDonald about his leaving the foundation, the Coincheck aftermath, the NEM’s future plans and why Ethereum will flip Bitcoin as premier Blockchain.

Katya Michaels: The news is that you are leaving NEM foundation as Vice President - is this true? What motivated this decision and what are your plans now?

Jeff McDonald: I've been working with NEM for four years. I started in February of 2014 and it's been a very awesome ride. I've done a lot of different things- the Apostille protocol, the voting protocol, I helped champion supernodes. I feel like I've been very successful and at the same time, I'm spread very thin right now.

I have two companies that I am invested in, Luxtag and KChain, and I want to focus a little bit more on them now. Both are being built on NEM Blockchain and they have been doing really well lately. We've got multiple contracts with really important names in Malaysia. Kchain in South Korea just recently released their first token- not on an ICO. They have great name recognition and connections in South Korea.

Both of these projects really need me right now, I want to help them and I need a little bit of time for that. I'm leaving the Vice Presidency, but I'm not leaving NEM at all. I continue to be very active speaking for NEM - here at CryptoBlockCon LA, in San Francisco tomorrow, next week in Philippines, at Consensus 2018 in May.

As the new leadership comes in, our hope is that they're going to scale out more countries. NEM US for instance, build up NEM Europe more, NEM Russia. I really want to see all these regional countries grow and be a big part of NEM.

KM: I have to ask about Coincheck- what is the update on reimbursing victims and finding the perpetrators? Why has NEM foundation stopped tracking the stolen funds?

JM: The police are doing their investigation. We consider that a secular matter, to let the police do what they're doing. As far as tracking the accounts that had stolen funds, we've left a lot of evidence on chain for the police to do a chain analysis and catch the perpetrators.

As far as I know, Coincheck has allowed most everyone, if not everyone, to claim back their funds, which is a really good thing. They've held up their end of the bargain, I think and I'm very happy that they did that. I feel that it was a very sad incident.

We're just moving forward now- Coincheck is mostly in our past and we are looking forward to Catapult now, which is a huge deal.

Regulations: Japan vs. US

KM: Can you talk about regulators in Japan and describe your experience?

JM: Japan is actually a great example of regulation. They have been really bold in going out and making regulatory decisions. I think that overall that is great for the cryptocurrency industry. Other countries don't really know what to think about it, but because Japan is being so clear with its community, it opens the door for big business.

I mean if you look at cryptocurrency, why hasn't Apple made its coin? Why hasn't Google made a coin? Recently in Korea, Kakao, which has near a hundred percent market saturation, mentioned that they're getting into Blockchain. A lot of really big companies want to get into Blockchain, but for one thing, Blockchain technology is not quite good enough to handle the scalability at the levels that these big companies work.

Even if the Blockchain was good enough, though, the regulatory issues are not clear.

Japan has been awesome to say what is legal, what is not legal, and now the doors are open for big businesses in Japan to come in and really roll up Blockchain so that millions of people can be using it for something other than speculation.

KM: How soon do you think the US will catch up to that kind of regulatory clarity?

JM: It'll still take a couple of years. The good news is that the conversation is happening and the US hasn't just said “It’s illegal!” The US has been very careful and very slow. Of course, I would want more clear and faster regulation, but I'm very satisfied with the happy medium in America right now.

I think that a lot of people won't like that I say this, but I think the SEC is doing a good job. They're going after scammers, and pumpers and dumpers. If you're an honest person and you're making a good project, following best practices, building something on the blockchain for real use - voting, or database security, or tickets- the SEC is totally fine with you.

Let's be realistic. There's only so much you can ask, for a government the size of America to move quickly with all these different agencies. They're all saying something a little bit different, but sooner or later they'll all get on board and become clear. I think that will happen in the next two or three years.

KM: Do you think ICOs will be greatly affected by regulatory activity in 2018 as compared to last year?

JM: ICOs are here to stay at least for another couple of years. ICOs in America might get cut back, but there will be a country somewhere - whether it's Japan or Belarus or Ukraine or Isle of Man- that will fully welcome Blockchain and ICOs and give clear and light regulation. Then, there will be another big boom of ICOs. The cat's out of the bag, the door is open, there is no stopping. There's too much money, it's too easy.

KM: What are your impressions of the Japanese investor community?

JM: The Japanese are great because they're actually really interested in the philosophy of the technology. It's really interesting, seeing the different countries and what people focus or don’t focus on.

One of the reasons why NEM is so big in Japan is because the Japanese have taken the time to actually read, study and understand the vision before they invested.

We have these die-hard Japanese fans that are just amazing. We have our own bar in Japan, with a special drink named after the Apostille protocol!

KM: A lot of people believe that NEM can dethrone Ethereum as the premiere smart contracts platform. What do you think about that? What are the obstacles to that happening, if any?

JM: I think that our technology has been fundamentally designed as more stable and secure. Literally every day, there are projects leaving Ethereum and coming to NEM. We've lost one project from NEM to Ethereum, and that was for financial reasons. I think that the data on the ground is showing that people who are building applications prefer NEM over Ethereum. Now we need to build on that momentum and scale it out.

If the growth patterns of Bitcoin, Ethereum and NEM continue with the same trajectory, what will happen is Ethereum will flip Bitcoin as the premier Blockchain. That's going to happen later this year, maybe next year, but it’s really just a matter of time.

Ethereum is better than Bitcoin basically in every way you can imagine. It's faster, it has more utility, it’s just better. NEM turns out to be not in every way, but in a lot of important ways better than Ethereum. Sooner or later, people that are building will get this.

KM: Is Catapult coming out soon?

JM: It will be open source next month. We've solved so many problems. For example, private key management, specifically losing your private key, which is a huge issue in Blockchain. We have a great contract coming up with Catapult. Whenever people are setting up an account, they can initiate this contract as an insurance mechanism to solve that.

Also, we have solved the gas problem. Let’s say CryptoComes makes a coin on Ethereum and you send it to all your readers. They say “thanks for the CryptoComes token,” and then they want to spend it, but they don't have any Ether for gas. Now, they have to sign up on an exchange, register and get an ID, send the money and then transfer Ether to the CryptoComes wallet. Only then, they can use CryptoComes to buy some advertising or send to their friends or whatever.

In NEM, we have this new transaction type which is going to allow CryptoComes to sponsor the gas fees. This is a really beautiful transaction because it allows regular users to get the CryptoComes token airdropped into a downloaded wallet, send it to their friends, start sharing it and creating an economy - even if they don’t know anything about Blockchain or Ether.

With Catapult, somebody can make their own app, their own wallet, and have their users or their business using that token without ever having to join an exchange. It’s seamless, frictionless, integrated into the system.

So there's a lot of great technology that's coming with Catapult that's just going to make NEM the only option.