Valeria Blokhina
Read U.Today’s news digest so you don’t miss out on the latest crypto news! 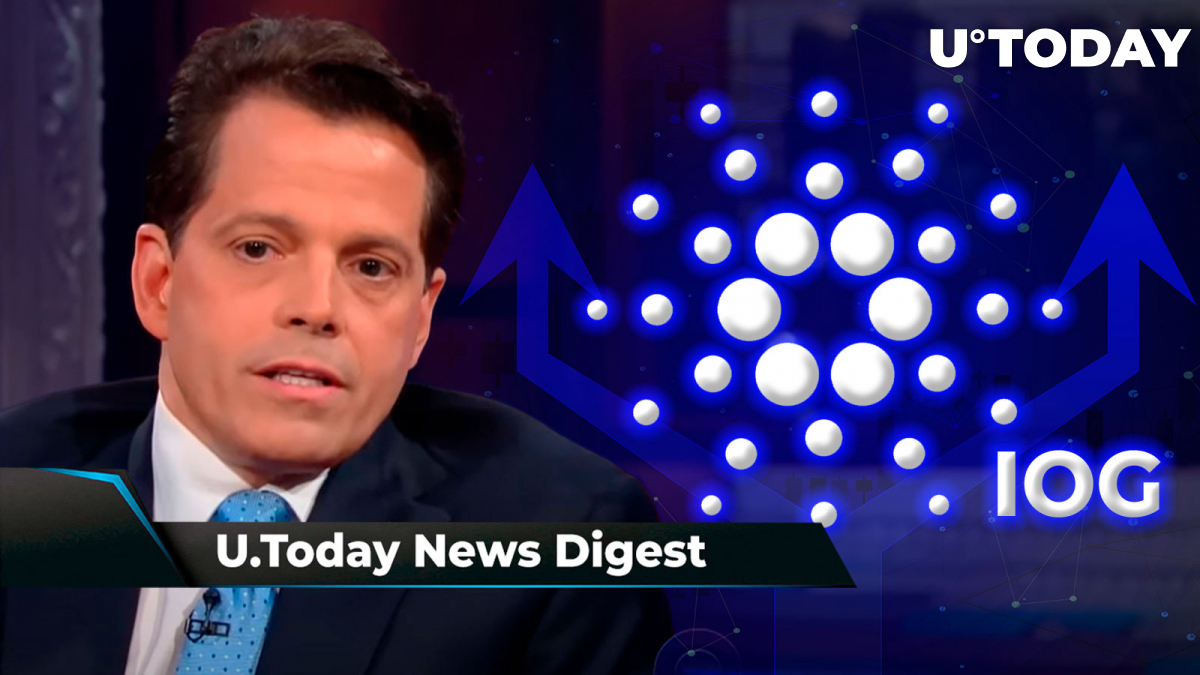 The past weekend brought lots of significant updates to the crypto industry. Let’s dive deeper into the details with U.Today’s top four news stories.

With only one week left until the tentative date for the Vasil mainnet launch, the IOG team has shared an update on the hard fork’s advances. The IOG team progressed to working on node v.1.35.1, which fixes an issue with snapshot replay. Cardano testnet explorer and other dependencies also saw upgrades following the new node. Work has also progressed on pipelining maintainability and the addition of tests for added confidence and regression prevention. Meanwhile, IOG is working on the upcoming release of node v.1.35.2, which aims to bring improvements and fix bugs found in the previous node versions during Vasil testing.

SkyBridge founder Anthony Scaramucci has recently confessed to a CNBC host that, looking back, he believes that betting big on Bitcoin was a “mistake” from a short-term perspective. However, in the long term, Scaramucci remains bullish on the largest cryptocurrency, saying that in his opinion, the Fed could switch its policy stance by the end of the year. During a recent interview, the investor noted that there has been an “exponential” increase in the number of Bitcoins. It is hard for “Mooch” to believe that cryptocurrencies will not be part of the future.

Cardano celebrates another uptime milestone. Unlike networks that face outages every now and then, the blockchain has been working smoothly for almost five years (or 1,760 days), despite many periods of extremely high loads. Cardano owes its smooth performance to being one of the most actively developed chains in the whole industry, with the number of GitHub commits for the project reaching 350 back in June. Such high development activity is also tied to a lack of existing technologies and solutions on the network, which makes it an unplowed field for developers who bring their decentralized solutions from other networks to Cardano.

XRP remains ahead of other altcoins, reaching big milestones this week

According to Santiment, over the past week, XRP token has reached a few big milestones, with one of them being several primary active wallets beginning to move their coins. In addition to this, a few large dormant XRP wallets have also started shifting their XRP stashes. Meanwhile, WhaleAlert tracker spotted a total of 374.5 million XRP transferred on Thursday, July 21, with the largest chunk of crypto equaling 155,000,000 tokens. In this streak of transfers, FTX moved 63,501,812 coins to BitGo, and Bitstamp moved 46,075,670 XRP to the same destination. Also, major U.S. exchange Bittrex moved 60,000,000 and 50,000,000 to Bitstamp and Bitso, respectively. The aforementioned 150-million XRP transfer was conducted from Binance to Bittrex.