NEM vs Ripple vs Ethereum: What’s The Difference?

George Shnurenko
Let’s figure out how NEM vs Ethereum, NEM vs Ripple, and Ripple vs Ethereum differ 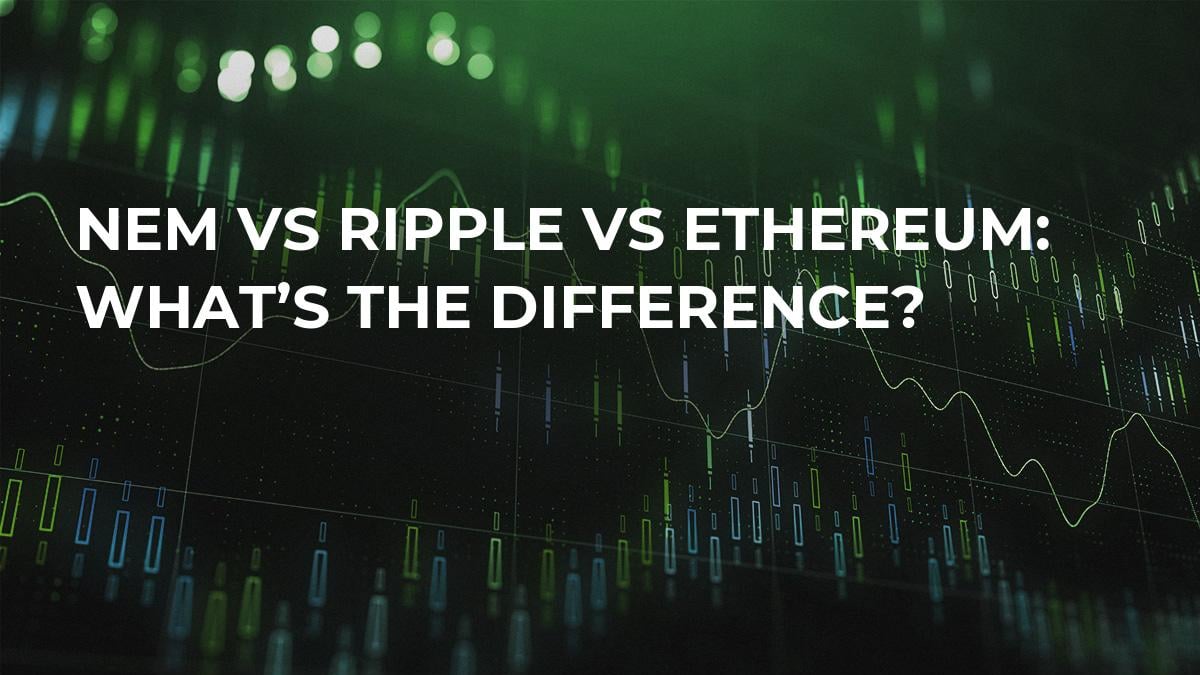 It’s time to figure out their technical peculiarities and understand whether investments are likely to pay out.

With the appearance of altcoins, it’s becoming harder and harder to see the difference between them. Recently introduced Ethereum, NEM and Ripple are retaining high positions in the cryptocurrency chart (Ethereum and Ripple are in the TOP-10), and each of them can serve certain purposes. Let’s figure out how NEM vs Ethereum, NEM vs Ripple, and Ripple vs Ethereum differ, what’s their current value, and what are the spheres of their application.

In order to clear things up, let’s trace the difference between Bitcoin vs Ethereum vs NEM. After the introduction of Bitcoin, Blockchain specialists started realizing that its technical basis isn’t perfect, and there are some considerable disadvantages.

What Ethereum Blockchain changed? It introduced smart contracts that allow for the transparent and safe transfer of funds, ER20 compatibility, and faster processing (20 transactions per second against three in Bitcoin).

NEM developers went a step further and introduced the blockchain with the following advantages:

When comparing NEM XEM vs Ethereum tokens, the difference is clear: Ethereum coin is the world’s second expensive coin with the price ranging around $500-700 in 2018. XEM costs $0.2, but its value is expected to grow in 2019. By 2023, the price of XEM may grow to $100-150. The forecasts for Ethereum differ, and it becomes harder to predict its value.

If you read the comments on NEM vs Ethereum in Reddit, you’ll see that there are supporters of both Blockchains. While NEM is simpler in use, Ethereum provides more opportunities for creating decentralized apps. While Ethereum integrates the smart contracts onto the Blockchain, NEM uses it outside the Blockchain.

Now we know that NEM is a widely promoted cryptocurrency that goes with a bunch of new functions– it’s used by businesses and individual users to manage the information and data securely.

When working with it, you can be sure that any piece of information on your computer will be safe– no one can tamper it. Many Internet users claim that NEM is rather Ripple’s main competitor than Ethereum’s, and there’s a piece of truth in that.

Where Ripple can be applied

Ripple (XRP) is actually an older coin that Bitcoin (it was created in 2004) and offers a unique protocol for banks that allows transferring money to any recipient around the world. Even individual investors can use the coin to perform the instant transaction.

The transaction fees will be lower than what traditional banks charge. In fact, the amount of banks and financial institutions using Ripple is growing thanks to lower fees induced by the protocol. That contributes to the growth of this currency.

Therefore, if you observe the implementation of Ripple vs NEM for banks, it becomes clear that the first coin is better. NEM is simply created for different tasks.

As for their price, both currencies have experienced value raising by over 1000% during the last 1-1.5 years. Experts recommend traders investing in both cryptocurrencies– they’ll be able to get dividends from both of them without serious risk, or at least from one of them which will cover expenses anyway.

Aside from the high level of competition, Ethereum and Ripple don’t have much in common, but both have potential to put Bitcoin’s ultimate reigning to the end. While Ripple plays the role of a cross-currency payment system, Ethereum is a software platform for the creation of smart contracts and decentralizes apps. Ripple wasn’t created to dominate over other currencies, but it’s used for transactions between all digital and fiat currencies. Ethereum Blockchain servers for a broader gamut of tasks than many other currencies and blockchains: it deploys smart contracts and the sphere of its application is limitless, and developers are free to create any apps and programs.

Are there any other differences? While Ethereum is mined, Ripple’s 100,000,000,000 XRP coins had been pre-mined before the launch. Instead, Ripple has a shared ledger that is “managed by a network of independent validating servers that constantly compare their transaction records.” The new transactions are added to the closed ledger, and the network should achieve a consensus about their validity. In case of disagreement between the nodes, the consensus process will be repeated until the network reaches a supermajority. Although the scheme of work is reliable, many complain that the network remains highly centralized. But Ripple shows no sign of falling down, and the company continues upgrading the product improving its speed, efficiency, and flexibility. Further on, Ripple developers plan to:

Ethereum, in its turn, works on the basis of the Ethereum Virtual Machine (EVM), which runs the code execution. Thanks to smart contracts, tokens are automatically transferred to users’ accounts. Ethereum Blockchain has increased security and low risk of downtime due to server outages. Ethereum Blockchain uses proof-of-work mechanism and lends the computing power in exchange for Ether. However, now the creators are transiting it from the proof-of-work system and toward a proof-of-stake system. Such change brings about several benefits, including a better distribution of nodes. Aside from that, Ethereum is being at the development stage called Metropolis. This stage presupposes introduction of:

Let’s summarize the main differences between the three cryptocurrencies and Blockchain:

Therefore, all three cryptocurrencies have different spheres of application, and it’s hard to say which one is better.

When it comes to investing, you should make preferences according to the amount of money you’re ready to invest, and the outcomes you’re expecting. Here are some tips:

After comparing NEM coin vs Ripple vs Ethereum, we can conclude that there’s no certain leader – each of the coins has a lot of potential and can outperform Bitcoin. Investment in XEM and XRP can pay out in the long run, while Ethereum traders should permanently keep tabs on the coin because it’s far from being stable.