David Dinkins
By banning all crypto ads unilaterally, Google has shown what it really thinks about freedom of speech, and busts its own iconoclast image 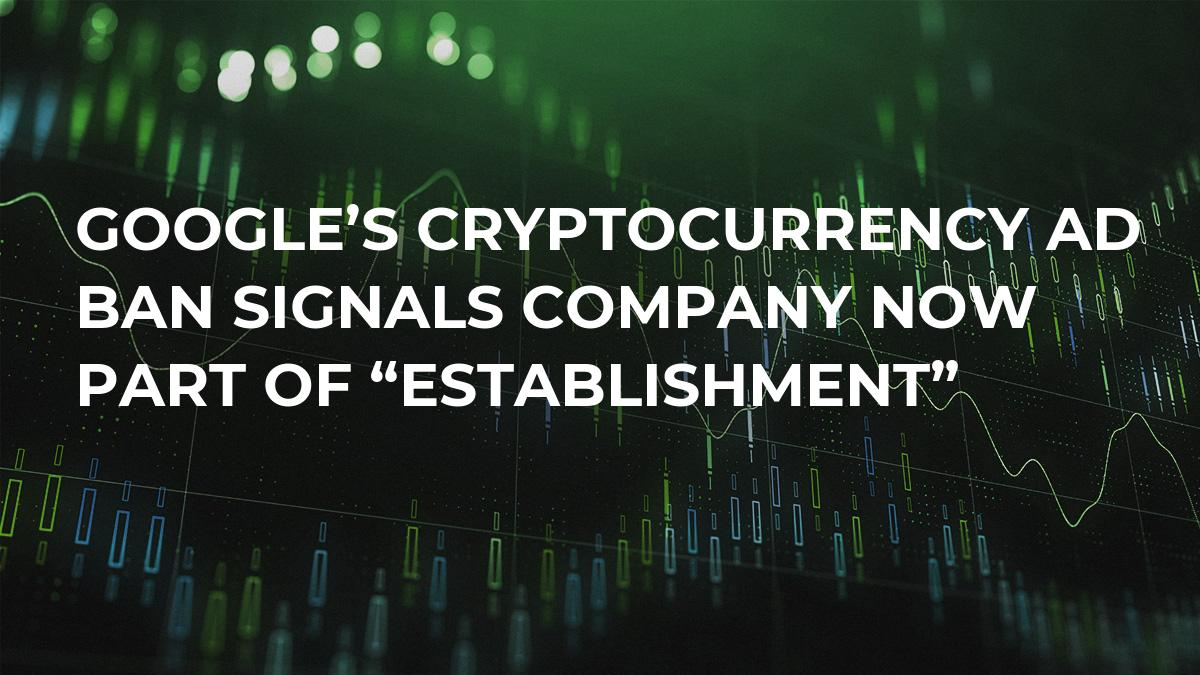 The company that once stood up to giants like Microsoft and became famous for its “do no evil” approach has finally joined the establishment. Even though Google claims to be interested in “consumer protection,” an outright ban on all crypto ads seems like an overreach. The company is either taking the easy way out, but making sure they don’t have to actually use critical thinking, or they are out-and-out supporting the war on digital currency.

"We don't have a crystal ball to know where the future is going to go with cryptocurrencies, but we've seen enough consumer harm or potential for consumer harm that it's an area that we want to approach with extreme caution.”

If Google lacks a crystal ball, as Scott put it, then why not take a more nuanced wait-and-see approach?

Blogger Vijay Boyapati explained on Medium that Bitcoin is presently in its fourth Gartner hype cycle, driven by institutional investors and growing mainstream interest. He predicts that the present bubble will eventually deflate, only to be surpassed, in time, by a much larger fifth bubble. This bubble, he predicts, will bring in the “late majority” of mainstream users and be driven by central banks adding Bitcoin to their foreign exchange reserves. He doesn’t make a price prediction for this fifth bubble but notes that gold serves a similar role in central banks’ stores. If the market cap of Bitcoin reached that of gold, each Bitcoin would be worth over $300,000.

Don’t take the word of an Internet blogger though. The managing director of the International Monetary Fund (IMF), Christina Lagarde, has written about the transformative potential of cryptocurrencies. As head of the IMF, Lagarde is essentially the central banker of central bankers, meaning both that she is incredibly influential and also that she is the literal personification of “the establishment.” If such a pivotal , and pro-establishment, pro-fiat, person can see the promise in crypto, why can’t Google?

Even if cryptocurrency has only a small chance of becoming the wave of the future, why would Google needlessly antagonize crypto supporters? Anybody can certainly see the importance of avoiding misleading ads and preventing scams, but surely Google could do at least a modicum of research to determine which cryptocurrencies were most relevant and least likely to be scams. A complete ban on anything crypto-related is a serious stretch and makes you wonder why Google is so afraid of digital currency.

The really strange thing about Google’s ad ban is that the company used to - at least before it became involved with China - be an unabashed supporter of free speech on the Internet. Google staunchly defends net neutrality and strong encryption, believing that both are absolutely necessary for free and open interactions online. The reader must wonder why Google is unilaterally banning all ads - themselves a form of speech - related to cryptocurrencies. Even Lagarde, the ultra-establishment banker, can’t deny the transformative potential of cryptocurrency:

“[Cryptocurrency] could, for example, power financial inclusion by providing new, low-cost payment methods to those who lack bank accounts and in the process empower millions in low-income countries.”

If the managing director of the IMF can see this, why can’t one of the world’s biggest tech firms? What say you, Google?