Dmitry Cake
At the crossroads: the bulls are dominating, but the situation is uncertain. 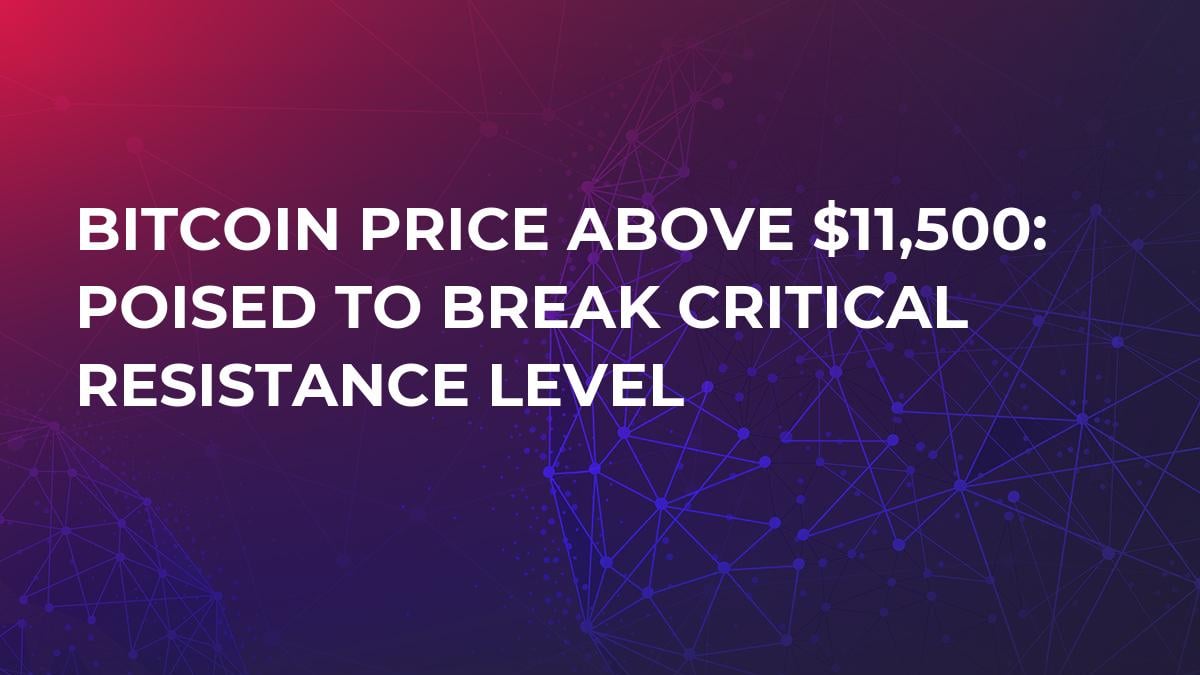 By Tuesday’s beginning, the bullish trend continues to dominate the cryptocurrency market. Total capitalization is $510 bln, just as it was two days earlier. During the day, Bitcoin price had grown by 8.2 percent to $11,550 while its dominance increased by another hundredth- now it is 38 percent. The underlying asset continues to grow more actively than the market as a whole, gradually taking the juice out of altcoins along the way. It seems that the bulls decided to make a run at least toward the critical level of resistance, which we'll discuss in the analysis section.

Other cryptocurrencies are showing varied movement with a predominance of moderate growth. In the top 10, NEO stands out with an increase of 8.2 percent, equal to that of BTC. The other assets show more modest results from two to four percent growth. Stellar is among the unfortunate today, with a loss of three percent.

We cannot ignore the growth of Ethereum Classic, although it is not part of the top 10, it’s clearly striving to return there. By total capitalization, which is almost $4.4 bln on Feb. 20, it has almost caught up with NEM, ranking 13th in the chart. During the day, the growth of ETC was an impressive 28 percent and the price had reached a maximum of $43. As we mentioned earlier, the reason for this growth is the upcoming early March launch of the Blockchain Callisto with some tokens to be distributed to Ethereum Classic holders.

It would be difficult to overestimate the importance of this moment for investors, with Bitcoin approaching the critical level of resistance formed by the upper boundary of the long-term descending channel from Dec. 17, 2017. A break through the level and establishment of the price above it will indicate complete reversal and serve as final confirmation of the upward trend.

Overcoming such significant resistance in one attempt could be quite problematic. Therefore, we allow the possibility of correction to the levels indicated on the graph in blue; these are the levels $11,000 and $10,500, which coincide with Fibonacci retracement values ​​of 0.382 and 0.786, respectively. The second level also coincides with the lower boundary of the two-week ascending channel, which should serve as additional support for prices. If there is a break through the resistance, the next growth target is $12,000, which we had written about previously. For now, everything points to the trend’s continuation, but the situation may change at any time, so we advise readers to refrain from active trading.

During the previous day’s trading, Ethereum Classic reached $42.85, reaching the 15 cents target which we described in the Feb. 14 price review. At this point, short-term investors can book profits, but we believe that this asset’s potential hasn’t been exhausted. However, the upper boundary of the ascending channel can become an obstacle to further growth, so some lateral movement is permissible.

The next compulsory item on the program is the level $46-$47, which coincides with the current all-time high and receives additional confirmation in the form of the 1.618 Fibonacci extension. The next maximum can be established at $54-$55. If ETC continues to move in the current channel, the target value should be reached at the end of February, but more rapid development is also possible. We always consider the negative scenario as well. If Bitcoin moves toward testing the supports that we mentioned, Ethereum Classic may see a correction to $35, but that is an unlikely course of events at the moment.

Evidently, NEO decided to surprise investors with a gift for the Chinese New Year and rose to $140 in one day, showing a growth rate similar to that of BTC. However, the future outlook is unclear. First of all, the price is squeezed within a tight ascending channel, falling out from which spells trouble. Second, trading volumes are rather modest and clearly insufficient for explosive growth.

The trading volume profile tells us that a huge number of orders took place in the range of $138-$148, but very little above that. Given this fact, as well as a hint in the form of the 1.618 Fibonacci extension, the next growth target is $147-$150. In the event of negative development, we expect a re-test of $130 and the lower boundary of the ascending channel.