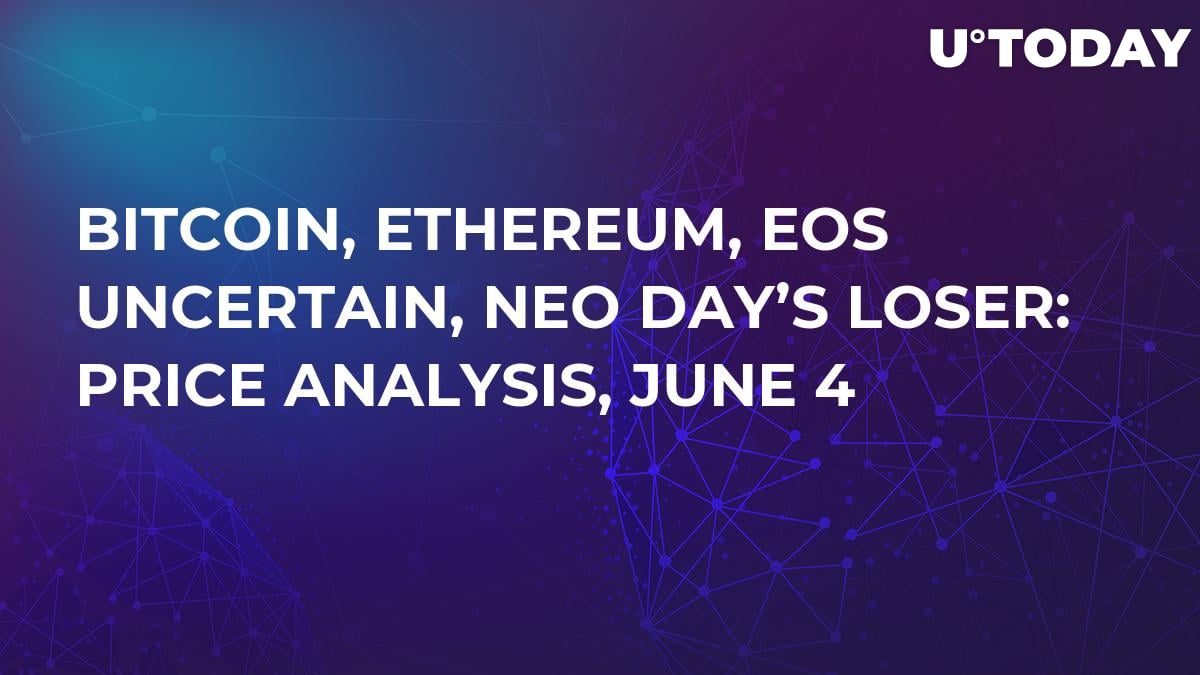 Bitcoin and its rivals seem to change their tendencies as they continue to establish new higher highs and higher lows. This positive mood means that corrections go on as there are no significant fundamental drivers to change the situation.

Market participants seem to be tired of those midterm downtrends and make cautious attempts to buy cryptos expecting that those corrections will give support for buyers and they will be able to develop progress.

As for news, there are some interesting facts related to EOS and other cryptocurrencies. The debates between EOS and Qihoo continue as Daniel Larimer, EOS developer, accused Qihoo 360 security in a malicious move against the cryptocurrency, which lead to EOS downtrend. Qihoo 360 founder and CEO Zhou Hongyi denies any malicious intentions underlying that bugs were fixed even before the report.

Another interesting event that is worth our attention is the announcement of the world’s largest venture capital fund by Binance exchange. The main target of this unit is to provide investments to startups and other Blockchain funds.

The currency pair has lost nearly two percent in the past 24 hours but this time there is nothing to worry about. As we can see, BTC/USD goes along the short-term ascending trend line jumping over one resistance area after another. Technically and fundamentally, this is a correction still as there are no positive drivers to change the tendency. However, those who have bought earlier, already gained some profits.

Let’s have a closer look at BTC/USD. The currency pair has jumped over the resistance area at $7,565 during the weekend and managed to test another resistance area at $7,734. BTC price declined towards the ascending trend line later. BTC/USD is testing this trend line, which coincides with $7,565 support area and 1.618 retracement level currently. The probable ways for Bitcoin are the following:

Ethereum seems to have recovered in general as it goes along is short-term ascending trend line meaning bulls have finally found support and try to drive ETH/USD higher. However, the currency pair having lost nearly two percent in the past 24 hours as bears make attempts to counter-attack. This upside run is nothing more than a correction still as fundamentally there are no reasons for Ethereum to change its trend. Anyway, traders can benefit from this correction.

Let’s have a closer look at the hourly chart. ETH price tries to break through the green ascending trend line and tests the closest support area at $596.08. ETH/USD ran higher during the weekend and established new local highs at $626.66, which coincides with 1.618 retracement level, but then buyers retreated allowing sellers to start a local bearish correction. The possible ways for ETH/USD are the following:

The currency pair seems to restore as XRP price reached the end of Fibonacci retracement on the weekend. However, later, XRP/USD jumped off this resistance area at $0.7013 and moved lower targeting the green ascending trend line. Ripple added less than one percent in the past 24 hours due to the local bearish correction that we can see on the Hourly chart currently.

Let’s have a closer look at the hourly chart. Ripple followed the other allied currencies and managed to establish new local highs. We have drawn this local red ascending trend line, which is under bombardment in the moment of writing as XRP/USD is trying to breach it. The possible ways for the currency pair are the following:

EOS has lost more than eight percent in the past 24 hours, but there is nothing to worry about as the currency pair seems to show even better results than its allies. This situation gives hopes to buyers as EOS price has established new local highs and left the Fibonacci retracement.

Let’s have a closer look at what is going on the hourly chart. EOS price has reached resistance area at $15.19 and tested it twice during the weekend, but failed to break through. EOS/USD started a bearish correction later and EOS  price returned to support area at $13.45. What are the possible ways for EOS/USD?

NEO has lost more than five percent in the past 24 hours and is the day’s loser. The currency pair developed an upside correction during the weekend and reached new highs at $58.03. However, later NEO/USD reversed and declined towards the current support area at $53.20.

Let’s have a closer look at the hourly chart. NEO/USD declined in the past 24 hours and breached the support area at $56.00. It seems like the currency pair has a local bearish correction. What are the possible ways for NEO/USD in the nearest future?