Bitcoin Cash’s Big Upgrade Seeing it Go From 8MB to 32MB, and What it Means

Darryn Pollock
Bitcoin Cash is set to take on a major upgrade in May, but what will this mean for Bitcoin’s biggest rival? 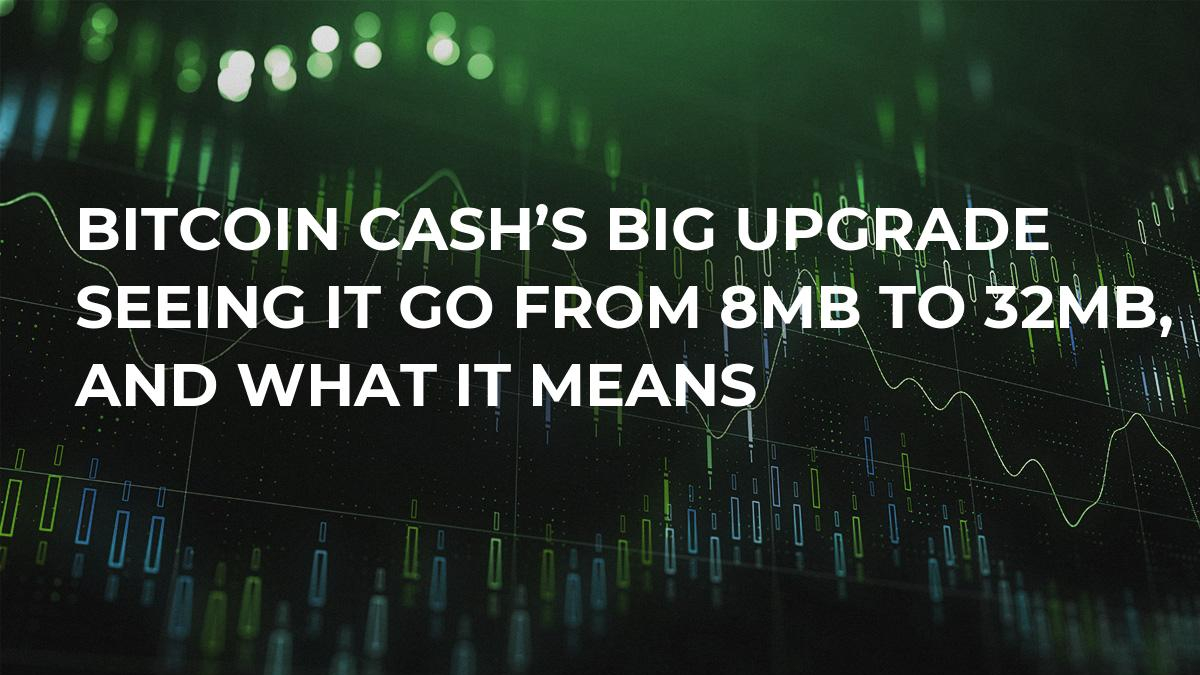 On May 15, Bitcoin Cash, the biggest rival to Bitcoin, is going to be upgrading in a major way for the second time since its inception. This latest upgrade is aimed at making the Blockchain more robust, with the main feature of it being the substantial increase in block size.

The upgrade will raise the size of Bitcoin Cash’s block to a whopping 32MB from 8MB. In perspective, the size of a Bitcoin block tops out at between 1MB and 2MB- in exceptional circumstances.

Bitcoin Cash has always based itself on being a coin that can handle a lot of transactions, quickly and cheaply. This has been accomplished by having larger blocks from the outset as the debate between Bitcoin Core and Cash raged on since last August and before.

This increase in size will once again allow even more transaction to happen per block, but it will also increase the “OP_RETURN” field from 80 to 220 bytes, allowing users to store data on the Blockchain. This function paves the way for use cases like time-stamping, rights management or asset creation.

Another big chance, or reinstated change, will see some types of smart contracts, removed previously over concerns that they could allow the Blockchain to be hacked, be reintroduced.

Steve Shadders, a developer for nChain, said in a blog post:

“Essentially out of an abundance of caution and lack of time to fully explore and fix the edge cases that needed to be addressed, the decision was taken to simply disable any opcodes around which there were doubts or even hints of doubts.”

This is a rather big step for Bitcoin Cash as it makes the cryptocurrency which is solely predicated on quick transactions, a little more versatile.

Bitcoin Cash has been growing in value recently with the latest upturn in the market. However, there is still speculation as to why. It was reported that perhaps it had to do with miners burning a portion of coins to help with scarcity, but that has been refuted.