A Machine Gun for Zombies: Opinion

Evgeny Konstantinov
How to ditch your inner zombie at the cluttered crypto space? 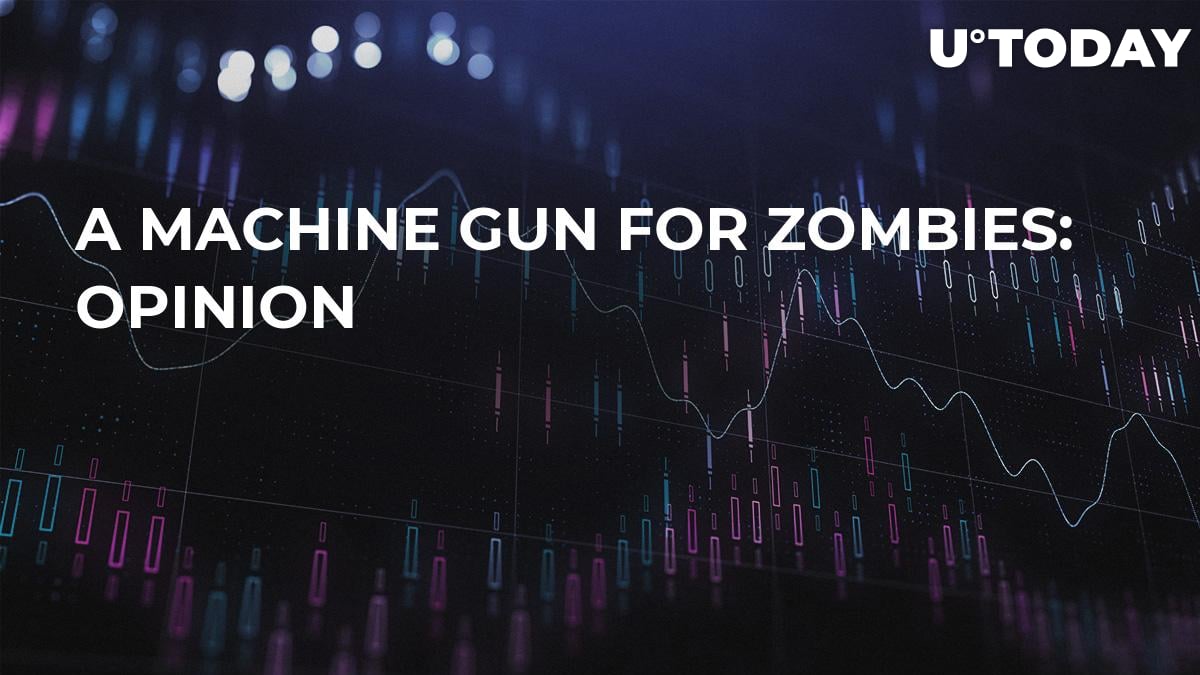 Chuck Klosterman, a popular essayist, wrote a very entertaining piece on zombies for The New York Times back in 2010.

Titled My Zombie, Myself: Why Modern Life Feels Rather Undead, the article takes an off-the-wall perspective on the popularity of the zombie culture and how it can be both a reflection and an evidence of our day-to-day lives.

I suggest reading the entire article because it’s just a lot of fun, but the important bit that I’d like to focus on is the one I’m quoting in full:

A lot of modern life is exactly like slaughtering zombies.

If there’s one thing we all understand about zombie killing, it’s that the act is uncomplicated: you blast one in the brain from point-blank range (preferably with a shotgun). That’s Step 1. Step 2 is doing the same thing to the next zombie that takes its place. Step 3 is identical to Step 2, and Step 4 isn’t any different from Step 3. Repeat this process until (a) you perish, or (b) you run out of zombies. That’s really the only viable strategy.

Every zombie war is a war of attrition. It’s always a numbers game. And it’s more repetitive than complex. In other words, zombie killing is philosophically similar to reading and deleting 400 work e-mails on a Monday morning or filling out paperwork that only generates more paperwork, or following Twitter gossip out of obligation, or performing tedious tasks in which the only true risk is being consumed by the avalanche. The principal downside to any zombie attack is that the zombies will never stop coming; the principal downside to life is that you will never be finished with whatever you do.

The Internet reminds us of this every day.

It’s been eight years since the publication of the article, but the digital world —  surprisingly — hasn’t changed much for the better.

Related
On Connecting Users and Devs And On Tapeworms: Opinion

When we think crypto — as in the Blockchain and crypto space — the way the information is structured (or, rather, completely unstructured and cluttered) is even lagging behind the rest of things.

There are various Blockchain courses — both entrepreneurial and from established institutions, and there are scattered wikis that are entirely dependent on the volition of those who run (or abandon) them. The sense of decentralization that flairs this space and community-centrism are a contributing factor to the information chaos that holds sway. This is not inherently bad, as this shows that community does rule this space, and every community is individual members.

And the individual members possess and spread and share the information. They also do information exchanges and this way move the crypto space forward.

Community members are knowledge bearers. At the same time, they are individuals, and individuals have their own agenda that ranges from complete selflessness for the common good to being driven by lacking knowledge to the no-holds-barred money making.

There’s an enormous amount of collective knowledge in the crypto space, but there’s an overwhelming amount of individuals. In your search for the knowledge, you very often have to rely on what complete strangers say, and you listen to what they say because they are a part of that subreddit that you are following, or a forum where you can see their badges and past messages, or a member with a weird name (and thinly veiled shill tactics) of a telegram group of a project that you support.

There’s almost always a group of people that you trust, but in your search for knowledge — and because you want to be early in the new projects and developments — you wander out of your safe closed circle and investigate and research. And when you wander out, there’s always an onslaught of zombies — people that you don’t know and can’t check their agenda or how trustworthy they are. You start going through them one by one, and you are killing off those that are suspicious or — to use the zombie terminology — braindead. The process is time- and resource-consuming, exhausting, and not incredibly effective, but it’s pretty much the only one possible right now.

Imagine if — before taking a part in a conversation with a stranger, before fishing out the information that you need from them — you were able to decide if the interaction would be constructive and of benefit for you at all. Imagine if you could immediately see how trusted they are and if they have weight and what their agenda was before they got your full attention and it was all transparent and immutable?

Time and trust are as important to an individual as they are for all the communities because these are the factors that move this space forward.