On Connecting Users and Devs And On Tapeworms: Opinion

Evgeny Konstantinov
Each and every in crypto space is selfish. But what about the customers? 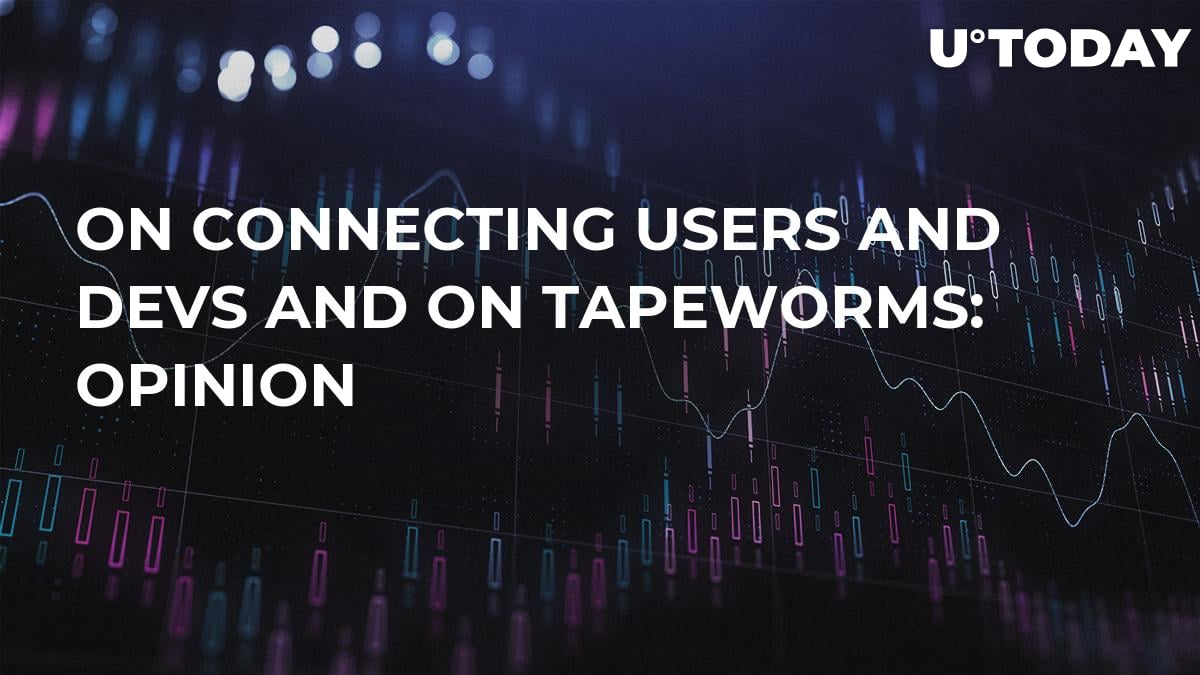 When I think of the current crypto space  — I call it crypto to include the various Blockchain technology (some of which is not Blockchain by definition), communities and everything that comes with it  —  I am invariably reminded of John Updike’s quote on the New York literary scene and Hemingway. “Hemingway describes literary New York as a bottle full of tapeworms trying to feed on each other,” John Updike wrote.

Everything that is united today under the umbrella term of Blockchain  —  from cryptocurrencies to DAGs and Hyperledger frameworks  —  is a vast territory of the life-shifting technology. This space, with all its turmoil, trials and tribulations, is fantastic because every part of it has a straightforward and thus elegant solution to the idea of how to have a trusted ledger in a trustless environment. And that it’s even possible. This very solution,  first proposed by Satoshi and implemented in Bitcoin ,  has sprouted in a great variety of approaches to real-life applications.

And that we all are still very far from having it all leveled off and fallen into place : The prospects of what we yet have to see excite me.

However, when trying to chart this impressive space, I can’t help observing that we are currently in a very similar position to the one described by Hemingway — the New York literary scene of the past — and recounted by Updike.

Today there are developers, entrepreneurs of all sorts  —  which is not inherently bad as the presence of a high number of venturers of all shades and colors is always a reliable indicator of explosive growth  —  individual investors and speculators, real businesses and enterprises as prospective customers.

I am not going to linger over each of these figures in detail as they all are too familiar for anyone who’s been in crypto for at least a few months, but instead, I’m going to do a little charting.

Developers develop. That’s what they do and in the majority of cases they like doing  it —  getting to the core of the tech, optimizing and coming up with new approaches.

Entrepreneurs are here to make something of themselves:  be the first, make money, help bring ideas to life — many times, it’s the ideas they believe in.

Individual investors are curious both about the tech and making some wealth. They are often autodidacts.

Speculators are  here to make money.

Real businesses: These are here to stay with roadmaps, thorough planning and traditional budgeting approaches (as in not riding the high of the Ethereum price all the way to the ceiling and then dumping in panic when everybody else starts doing so). Real businesses. Businesses that had their prospective customers pretty much signed up before they started an ICO (if they ran one at all).

And finally, enterprises ,  the most lucrative ones on this chart. Big names that give heart palpitations to every crypto asset holder. The enterprises that are going to use the Blockchain solutions developed by indie devs or real businesses will come to the exchanges and buy coins in droves. That’s what every speculator, individual investor and entrepreneur is hoping for and this is what’s driving them.

But What About The User?

For the first time in a very long period, the user,  assisted with Blockchain, can no longer be treated as the consumer sheep. The user can become a full member of any platform they choose to join; they can be a real customer of any dApp with real value  —  not a perceived market differentiator value   but the real one.

The user is not your ICO fuel. The user is the one who makes all that Blockchain tech adoption possible. The user needs an easy and frictionless onboarding  —  not the marketing slang type “onboarding”, which often means hooking up an unsuspecting consumer to hidden regular payments, but real onboarding to the world of Blockchain and dApps where the user has equal rights with everyone else; where the user is always a full member, an equal citizen, instead of a tied up sheep for marketeers.

The user is what’s important today. All the dApp devs would love to let the user try out their product. The majority (if not all) of the Blockchain protocols would love the user to become a part of them, use the protocols in their daily lives like they do with all the other centralized tech.

Related
From You Commodity to U°Community: How Crypto Community Leads the Charge
#UCommunity