The SEC’s Delaying on a Decision About BTC ETF is No Surprise, and Probably Good

Darryn Pollock
News is that the markets are reacting to the SEC decision to delay its decision on BTC ETFs, but it was an expected move, and perhaps not a bad one 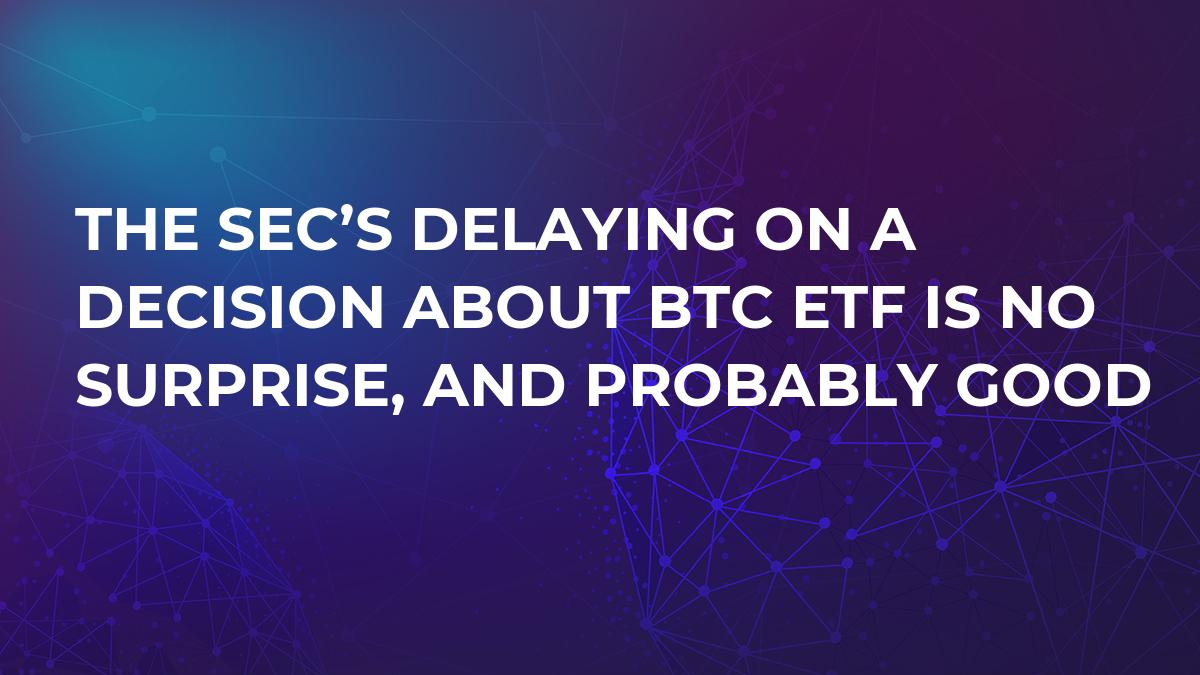 Bitcoin has dropped below $6,500 and many are blaming this latest drop on the fact that the SEC has announced that they are delaying their decision on Bitcoin ETFs filed by CBOE, VanEck and SolidX.

This news follows the failed attempt by the Winklevoss twins to try and get their ETF off the ground- another expected outcome which played its role in bringing down the market briefly.

However, if the latest drop has got anything to do with the delay in making a decision from the SEC, it is rather unnecessary as many have been calling this for some time now.

At the time when the Winklevoss ETF was thrown out by the SEC, crypto commentators were looking to ETF applications which they thought had more of a chance in succeeding, but they also followed it up with a caveat that the decisions would be pushed out.

Ran Neu Ner, Anthony Pompliano and Mati Greenspan are just a few who believed the decision would not be coming out as early as August.

NeuNer was unaffected by the SEC’s decision, while Pompliano said a few months back:

As expected the SEC has exercised their right to an extension on the Van Eck ETF - new date 30 September.https://t.co/g0VpimsxJf

Not a bad thing at all

A delay is far better than a rejection, which the SEC has already done. So, the fact that they are taking their time seems to suggest that there is true and through thought going into this decision.

The SEC is also under a lot more pressure as to not simply push this application aside as there are moves from the public, who have flooded their website with comments about the CBOE ETF, as well as internally.

Hester Peirce, an SEC regulator, also filed an official letter of dissent against the denying of the Winklevoss ETF.

The fact of the matter is that regulatory movements, positive or negative, play a big part in shaping the cryptocurrency environment- but often these are knee-jerk reactions.

Looking deeper, it is quite obvious that this is a smart move from the SEC and could lead to a better product down the line.