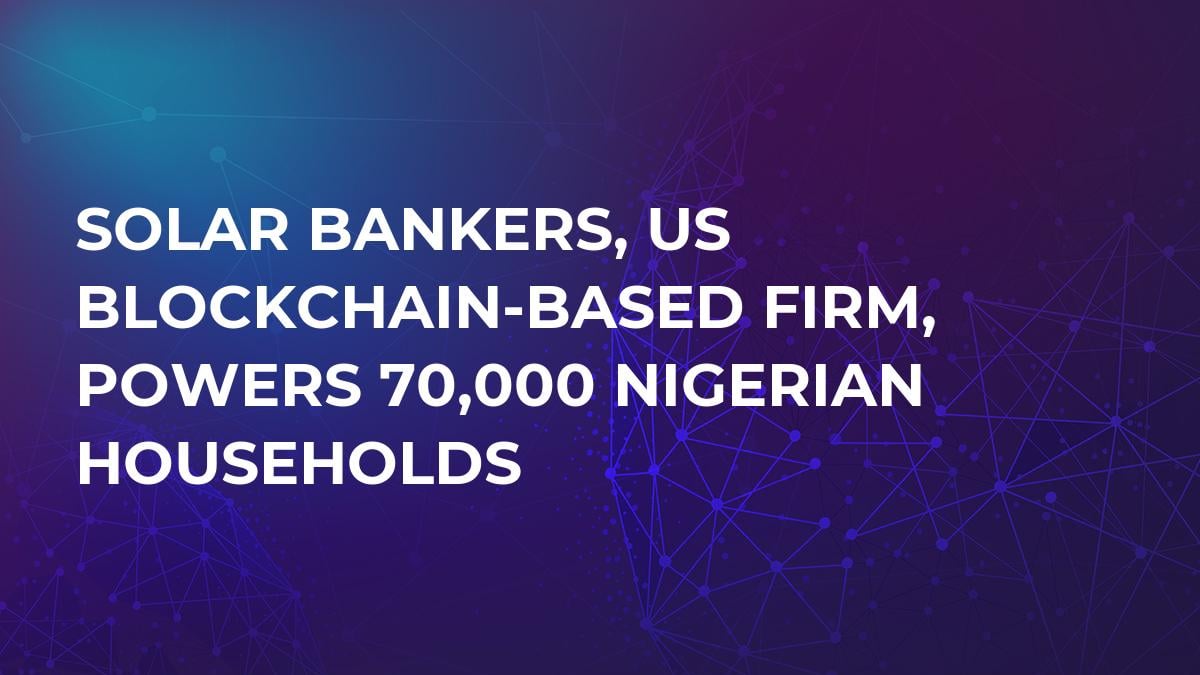 While the majority of us in the Western developed world live with access to power 24 hours a day, more than half a billion people in Africa live without access to electricity.

Now, in an initiative financed by the World Bank, US-based energy firm Solar Bankers is using a Blockchain to power 70,000 Nigerian households.

In the sub-Saharan continent of Africa, nearly 600,000 people are without a reliable means of electricity, and more than 55 percent of residents living in outlying rural areas do not have access to an electric grid, according to data compiled by the World Resources Institute.

“I cannot help but wonder how many medical catastrophes have occurred in public hospitals because of ‘no light,’ how much agricultural produce has gone to waste, how many students forced to study in stuffy, hot air have failed exams, how many small businesses have foundered.”

At the core of the issue are two systemic problems: the lack of a power source to generate electricity and a broken and often utterly absent infrastructure required to electrify rural communities.

Blockchain-based solar technologies solve both of these problems and offer rural communities the opportunity to participate in the technological global economy making many entrepreneurs for the first time, says Alfred Jost, CEO of Solar Bankers.

Alfred Jost, CEO of Solar Bankers in an interview with U.Today, says:

“We want to give everybody the chance to make money from the sun. With the power of the sun and Blockchain, we can achieve this goal.”

Households will be supplied with specialized solar panels which can be installed in their homes and participants will use mobile phones or other devices to connect to the power grid enabling them to store and trade solar energy tokens the Solar Bankers Coin (SLB)  on the company’s Blockchain.

The company estimates that households will be able to produce electricity for $0.04 and sell it at a higher price.

Households will be paid in SLB coins which they can use to buy goods or other necessities and can sell the excess power to participants in the platform.

“We knew that we need to find an energy efficient solution to produce our coin; otherwise our protocol would not work.”

Skycoin’s Blockchain node does not require any power source except the Sun and runs on a consensus algorithm which can generate 50 mln coins in two hours and perform 300 transactions per second, the company says.

The innovation directly addresses the issues of high costs incurred by governments when building and distributing electricity via centralized infrastructures in areas with rough terrain and low population densities, Jost says.

"We want to provide utilities and governments with a comprehensive package of applications containing everything they need to build microgrids in which households can produce and trade energy.”

Electrifying rural communities has become a cornerstone issue in developing countries including India, which has set a goal to electrify 18,000 villages in less than four years.

But the implementation of the ambitious goal has proven to be costly and time consuming because a centralized energy infrastructure requires massive investments in power plants, and transmission and distribution channels, experts say.

“In developing countries, there will be no need to build large plants, transmission, and distribution. Everyone could have a solar panel on their rooftop. Renewables is a revolution. A bigger revolution is distributed renewables.”

While India has turned to both decentralized and centralized solutions, residents say that solar-powered solutions have been better than connecting to the government’s metered electricity grid.

Residents prefer solar power because metered grid electricity feels like expenditure, but payments made for a solar home system go towards ownership says Paul Needham, chairman of Simpa Networks,  a firm which sells small solar-powered systems on financing to households and small shops in India.

“Solar electricity is free, and it’s hard to compete with that.”

Even though Solar Banker’s Skycoin Blockchain uses energy entirely from the sun, the provision of electricity using Blockchain may seem counterintuitive because of the high costs energy costs associated with its generation.

But experts say a vast amount of solar energy exists which could be captured to solve the energy consumption involved with powering Blockchain.

Every 88 minutes nearly 470 exajoules of energy from the Sun hits the Earth’s surface; far more than the entire amount of energy humanity consumes each year, says Peter Diamandis futurist from Singularity University and X Prize Foundation.

Capturing 1/1000th of the sun’s solar power would be enough to unlock six times more energy than the world consumes in all forms today, experts say.

Peter Diamandis, the futurist from Singularity University, in a recent Ted Talk said:

“Solar power via the use of photovoltaics or concentrated systems is the ultimate energy source for the future of humanity *short of nuclear fusion.”