Denys Serhiichuk
??In a short period of time decentralized applications have become very popular. Ethereum, Tron, and EOS are the most used platforms to create DApps nowadays 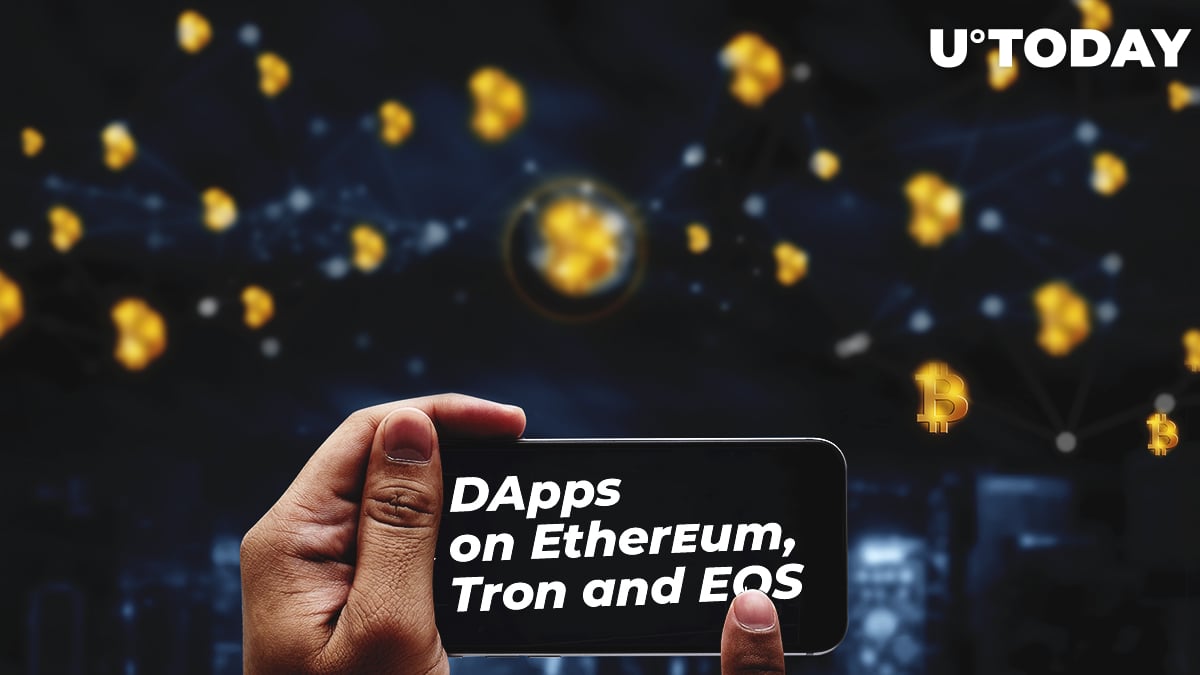 Decentralized applications (DApps) have long been considered one of the best examples of the use of blockchain technology. Using smart contracts, whether, on the Ethereum, EOS, Tron or other platforms, various global industries can be transferred to the blockchain, thus creating a society built on decentralization.

However, currently, the adoption of such applications has substantially declined. And these are not just speculations, but numbers. According to a LongHash study, on February 1, 2019, only 180 out of 1812 DApps on Ethereum were noted for ERC-20 transactions, which is only 10%.

Statistical data shows that DApps are not yet ready to take over the world. 19% of DApps recorded from 10,000 to 100,000 transactions. Although this is not so bad, especially considering the relatively low level of transactions in the Ethereum network, it is obvious that DApps are going through difficult times.

Despite the popularity of EOS and TRON, which launched thousands of decentralized applications, the division by platform looks the following way:

In this article, we will look at the situation of the DApps market, what applications are popular and how much money they accumulate.

The following four applications are extremely popular on the Ethereum network.

IDEX is the most popular dApp application on the Ethereum network, primarily due to its DEX-oriented approach.

IDEX is an exchange platform where you can conduct all cash transactions in real time. The service builds its work on the basis of Ethereum smart contracts, and you can execute several transactions at once.

The main advantages of IDEX:

However, IDEX exchange is not suitable for every trader. Real professionals who have repeatedly earned profits in the process of cryptocurrency trading will be able to work here.

ForkDelta is a decentralized platform that gives you the chance to trade both Ether tokens and other Ethereum-based crypto assets with users. The exchange is not controlled by a centralized authority for storing user funds and facilitating transactions.

The market of altcoins is actively progressing, and ForkDelta is trying to keep up with the trends. Almost every ERC-20 based token is available for trading on the platform. In addition, almost all new tokens are added almost daily.

The possibility of token listing

Any member of ForkDelta community who participated in its ICO may request a listing of a new token. The procedure is simple and completely free.

HyperDragons is a multiplayer combat game that enables players to gather, breed and sell digital dragons made on smart contracts on the blockchain. The game has also a PvP fight mode where gamers use dragons to fight against one another in return for remunerations and points of experience. There is additionally a P2P market that encourages the inside investment funds of the game.

HyperDragons utilizes Ethereum ERC-721 tokens to create unique virtual dragons that can be exchanged or traded. Each virtual dragon in the game has its own battle capacities, which are determined by three elements: dragon skills, fame, and points of attack.

The developers are planning to hold a series of sponsored online championships and competitions. The champ of the challenge will be compensated with money and glory.

The most energizing part of the game is that players can improve the dragon’s combat capacities. In addition to participating in dragon training competitions and raising its skills, one of the easiest methods is to breed dragons.

It has the following key peculiarities:

The idea of the platform is great and has a good chance of success. ShapeShift is already a successful and fast-growing enterprise, and Kyber strives to become the best version of it. The cryptocurrency trading industry is big, and there may be several winners in this field.

The ALLBET platform is aimed at creating the DApp game ecosystem “Game / Guess as a Service” (GaaS). The platform’s games are Dice and Poker. The local token on the ecosystem is called AB and has an overall reserve of 10 billion.

Tokens are available in three competing blockchain networks: Tron, EOS, and Ethereum. Thus, ALLBET has a referral program that rewards users for promoting and inviting other people to the platform.

It is the first DEX in the TRON ecosystem. TRX Market trades assets presented on TRON. These are all TRX10 standard tokens. The platform supports 22 languages, and since the exchange is relatively young, it is impossible to say how popular the assets are. Nevertheless, the trade is going on.

Soon developers are planning to launch another DApp – TronWatch. So far, this service works in a test network, but they say that after testing it will be able to compete (in the sense of operating at higher speeds) EtherDelta.

Dice 3D is a dice game with a 100% profit. The gaming platform Dice 3D released DCX, the standard token TRC20. The overall supply of tokens is 100 million.

The platform shares all its profit with clients in the form of profits. This is done so that customers feel that they really own the platform. DCX tokens are mined in the game. Mining is carried out in 10 separate stages, each of which is 1 million DCX.

Based on its name, PRA CandyBox is an EOS-based CandyBox DApp application where users can request tokens at four-hour intervals.

The app encourages clients to use more EPRA tokens, as this will increase the user level, leading to shorter intervals between requests, which means they can get more tokens than their counterparts.

EOS Knights is the first ever (besides gambling) game based on the blockchain, which was created on the EOS platform just after the launch of the main network. More than 5,000 gamers from everywhere throughout the world play it day by day.

In order to begin the game, you should have an EOS wallet and account. The intent of the blockchain game is to protect the village from the orcs who are constantly attacking the locals. Three heroes can resist goblins: warrior, bowman, and witch.

The gamer plays on the side of 3 characters and equips one of them. The fights among users and orcs can proceed for quite a while. Goblins win in all battles, because of their quantity advantage.

The game's point is to make new characters: a warrior, a bowman or a witch for another fight. So, a gamer takes part only in the creation of his fighter with the help of new stuff, which is received in EOS Knights as a reward, while the rest of the fatality happens by default. There is no way to finish the game because the main thing is to pump the character and battle again.

The key feature of the game is the use of blockchain technology. It has the notable free-to-play game genre with the randomly paid getting of any stuff that even better improves features of the characters. To get a better character, you are to fight the orcs a lot.

Concerning the case of EOS Knights, the obtained materials that are issued for a large number of long fights can be sold to other users for the “fuel” of the game – EOS. So, all stuff and goods created by players have financial value, and players are full owners of these things.

According to the feedbacks of many clients who have already played this blockchain game, through EOS Knights there is an opportunity to get to know the world of digital assets better and switch to a new level of interaction between founders and users, and establish payouts for winning with the assistance of liquid tokens.

Gamblers are now starting to understand the potential blockchain technology can give the world because one of the most popular DApps on EOS is the gambling game called PokerKing.

Now poker players have the possibility to play their favorite game on the blockchain. PokerKing is also the 1st professional Texas Hold'em which uses the EOS ecosystem.

Users love it because they can play wherever they are, and thanks to smart contracts, winning is guaranteed and very reliable.

Ethereum vs TRON vs EOS

Despite the popularity of Ethereum, TRON and EOS are also keeping up with the trend of DApps and can even overtake Ethereum. 2019 is just beginning, so Ethereum may have more than one chance to regain its place as the leading platform for decentralized applications and smart contracts.

At the moment, the leader in DApp development is Ethereum with 1,538 applications, followed by EOS with 450 DApps and Tron with 382 DApps. Tron, along with EOS, is currently trying to capitalize on the problems that Ethereum has encountered in terms of scalability and load. So, the developers of TRON and EOS do not intend to slow down the pace of development of their project, unless they face serious obstacles.