Denys Serhiichuk
Which altcoin from our list will surpass the rise of Bitcoin (BTC)? 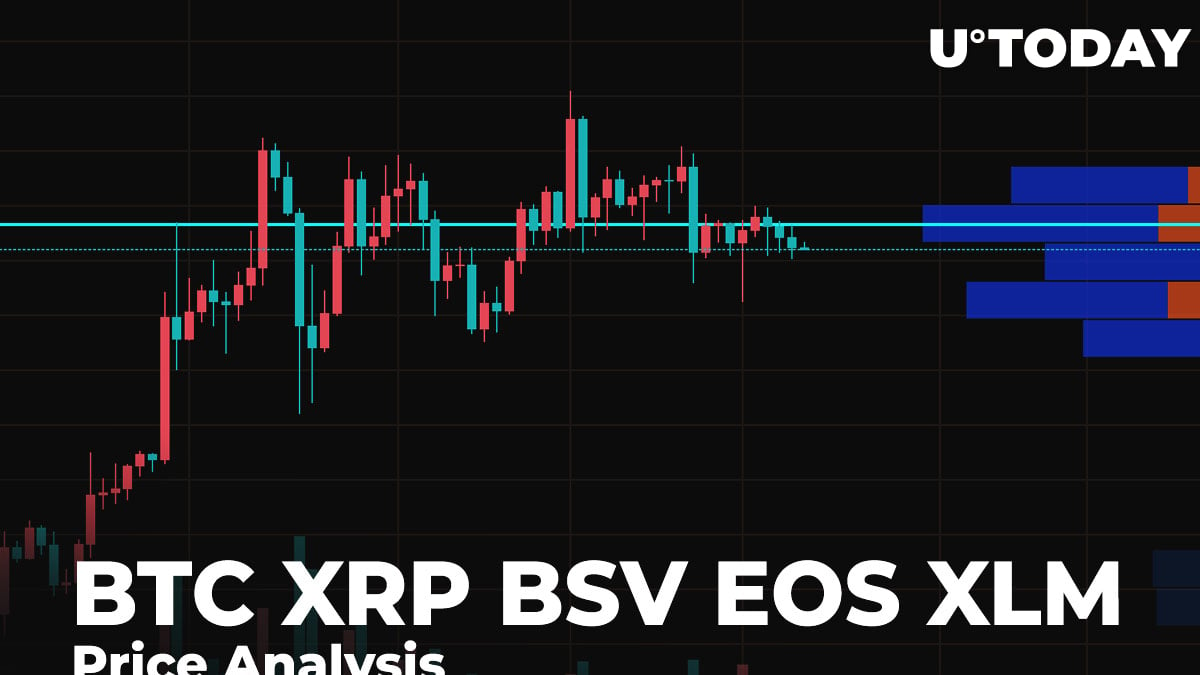 The situation within the cryptocurrency market has not changed in the second half of the day. Bitcoin SV (BSV) remains the only cryptocurrency with positive gains from the Top 10 list, with a rise of 0.90%.

Below is the vital information for Bitcoin (BTC), XRP, Bitcoin SV (BSV), EOS, and Stellar (XLM):

BTC/USD
The rate of Bitcoin (BTC) remains relatively unchanged since last week. The rate decline is to up 1.64%, while the drop since yesterday has constituted 0.64%.

Bitcoin (BTC) is trading between the basic and support lines of the Bollinger Bands. So far, the bullish scenario has not been canceled out as the coin has not fixed below the $9,000 mark.

Related
Bitcoin Dominance Is About to Collapse, According to Crypto Trader Scott Melker

In this particular case, Bitcoin (BTC) might make a false breakout of the zone over the weekend, followed by a rise to $9,200 and above.

XRP/USD
XRP is performing worse than the main crypto. Since the start of the week, it has dropped 2.59%. In terms of daily analysis, the coin has lost 1.12%.

Looking at the daily time frame, a large triangle pattern has been forming with the endpoint at the crucial $0.1750 support level. Even with small bounce backs, XRP does not have the strength to grow as the other altcoins from the Top 10 list. Thus, the ongoing decline is supported by a falling volume, which means that a bearish trend has started. If the price continues to decrease, the aforementioned support level might be achieved by mid-summer 2020.

BSV/USD
Bitcoin SV (BSV) is the only altcoin with gains from the Top 10 list. The price of the coin has gone up by 0.38% since yesterday.

Bitcoin (SV) has found support around the $172 level. From this point, one might expect growth to the closest resistance level at $178.50. A rise in price is likely to happen, which is confirmed by an increase in volume. There is also a high concentration of liquidity above.

EOS/USD
EOS is showing a much better price action than some of the other altcoins from the Top 10 list. The drop since yesterday is just at 1.20%.

EOS has been trading in a falling channel since the beginning of the month. Its liquidity is at relatively high levels; however, there is no volume to push the coin down. Respectively, the most likely scenario is a test of its support level at $2.4030 shortly.

Stellar (XLM) is one of the biggest losers from our list. The coin has lost 1.78% in the last 24 hours and has dropped about 5% since last week.

Stellar (XLM) is trading in a similar manner to EOS. Its liquidity is high; however, its trading volume continues to go down. This means that there are no buyers willing to buy back at the current levels. The next support level is at $0.06510, which might be attained by the end of the month. However, if bears break this mark, the long-term trend will switch to a bearish tone.