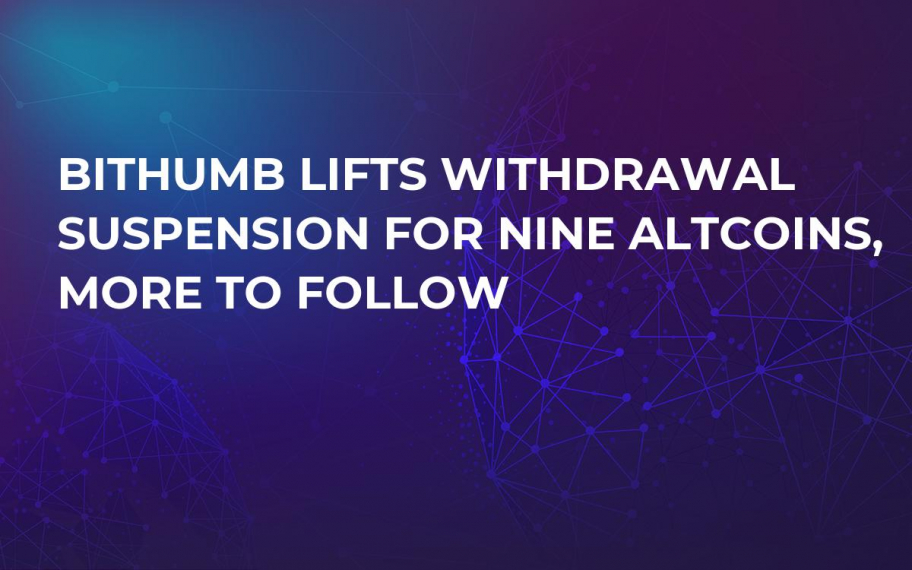 Bithumb, one of the biggest South Korean exchanges, finally opens withdrawals for nine major cryptocurrencies while continuing to lag behind its major competitor Upbit. The company is still yet to recover from the disastrous July hack that resulted in $31 mln being stolen from the exchange.

Getting back on track

On Aug. 4, Bithumb made an official announcement about reopening deposits and withdrawals for nine digital assets, including Bitcoin, Ethereum and Ripple. The company specifies that this is only the first stage of lifting their withdrawal suspension, so more coins will be available in the nearest future.

Currently sitting at the 15th place on CoinMarketCap, Bithumb has been on the line for more than a month. On June 20, the South Korean exchange admitted a security breach that had led to a loss of $31 mln. While it pales in comparison to the 2014 Mt Gox hack or a more recent Coincheck hack (the Tokyo-based exchange had to repay its customers $425 mln), Bithumb was still forced to suspend withdrawals indefinitely (until the matter gets ‘carefully reviewed’). Since it took Bithumb so long to resume transactions, the company now has to deal with playing second fiddle on the South Korean market after succumbing to Upbit.

Bithumb’s unlucky streak doesn’t end with the aforementioned hack. A few days ago, the Korean exchange had to suspend the registration of new real-name virtual accounts after not renewing its contact with NH Nonghyup Bank. Unlike Upbit and other AML-compliant Korean exchanges, Bithumb is deemed not secure enough by the bank. That caused Bithumb’s daily volume to tank (it suddenly dropped like a rock from $350 mln to $125 mln). However, one of Bithumb’s representatives are certain that this issue is only temporary and the contract is going to be renewed in the nearest future.