Bitcoin Price Prediction: Experts Expect 84% Increase for 2019 — Could They be Right?

Darryn Pollock
Bitcoin has seemingly reached its bottom in the mid $3,500 range, so a host of experts are now predicting its price will almost double in 2019 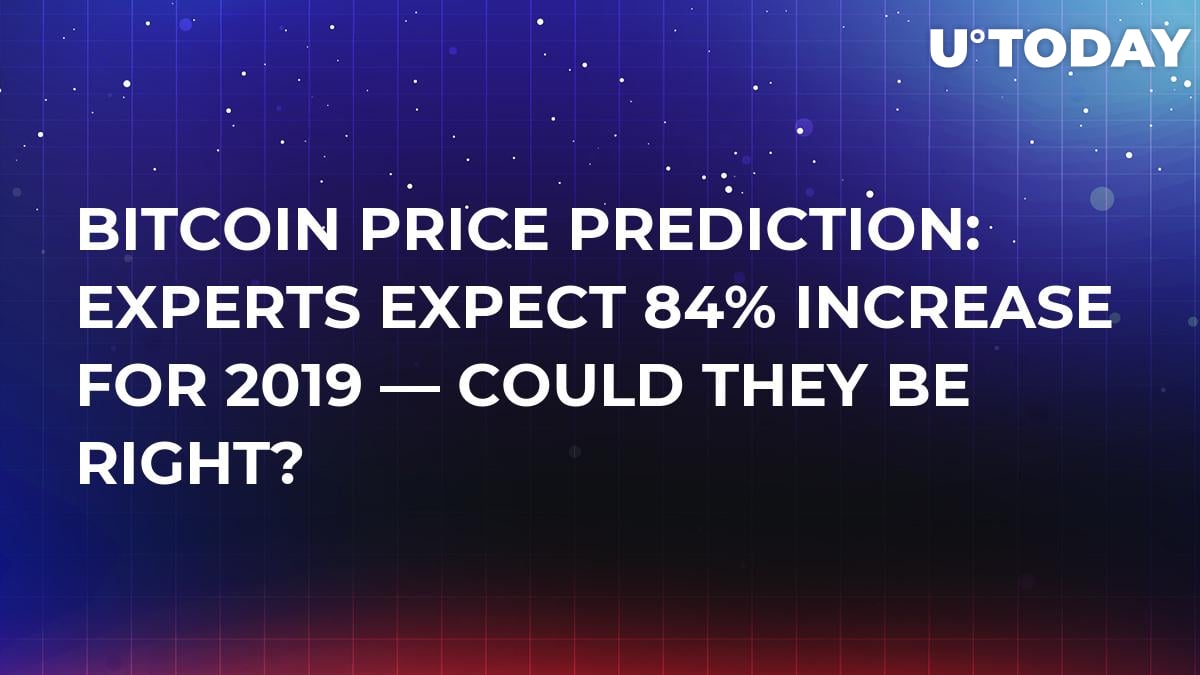 Bitcoin has now been a part of its longest bear market ever and seems to have reached its bottom. For this reason, a host of experts are predicting that 2019 will be a year where the cryptocurrency increases in price by as much as 84 percent.

While 84 percent would be a good increase over a year for any stock or asset, it is a relatively small growth spurt for the classical volatile digital asset. Bitcoin has been known to increase 1,000 fold in a similar space of time.

However, an 84 percent increase would see the price fall just short of the $7,000 mark which would be a welcome growth pattern over the remaining 11 months in the year. The change in the market atmosphere is now much more conducive to slow and steady growth.

But, as things stand at the moment, even a 20 percent growth spurt feels unobtainable, so could the experts, who have been polled on their thoughts, be right about this prediction?

Reasons for some growth

Digital Capital Management CEO Ben Ritchie was one of the more bullish predictors of those polled. He tipped a year-end price of $9,500. The average price prediction was just under $7,000.

“Two things to look out for in 2019 will be whether we will see decoupling of the cryptocurrencies, as to date they have trended in a relatively similar manner,” Ritchie said, forecasting a “slow and steady rise in 2019”.

“The second is the impact of the traditional markets on cryptocurrencies. Will Bitcoin rise if the S&P drops? On-ramp and off-ramps to purchasing cryptocurrencies will improve in 2019 with Bakkt and Fidelity Group entering the market. However, I do not believe we will see many institutional investors enter for some time yet.”

Another consideration of the experts who were asked their opinion was the new emerging group of investors, the millennials.

“Millennials are particularly open to embracing crypto in order to accumulate wealth for themselves,” said HiveEx.com co-founder Fred Schebesta. “They’ve grown up with digital technology, so it’s little wonder they want to get involved in digital currency. They are looking at investing very differently to their parents.”

The factors mentioned by some of the experts polled make clear sense as to why Bitcoin can indeed rise and become a solid and dependable asset. The speculative growth that was categorised by the coin rising up to $20,000 in a matter of months was not healthy for the market.

For Bitcoin to reach $7,000 in 11 months is solid growth, and growth that will not be compromised. It is the kind of growth that is also not out of the reach of the burgeoning asset.

Blockchain adoption is continuing despite the bear market, and there is an undercurrent of cryptocurrency education going on that is making people more savvy, rather than speculative, about buying into things like Bitcoin.